In the week's leading up to the NCAA Tournament, back when there was hope, the sun came out every day, and you had never heard of Ohio University, we used this feature to document the answer to one of gambling's greatest questions:

The answer became abundantly clear.  Teddy is a better sports gambler than Varmint the Greek.

And with the World's most popular game now taking the international stage for the next few weeks, we're bringing Teddy back to help you make money on the 2010 FIFA WORLD CUP (Note: I included those words simply so that this post can generate cheapie google hits so our robust offseason numbers will look better.  I am also looking forward to what UNITED STATES PRESIDENT BARACK OBAMA has to say today about the OIL SPILL IN THE GULF OF MEXICO, what will happen in the ongoing saga between the representatives of GARY COLEMAN and his EX-WIFE SHANNON PRICE, or what LADY GAGA was thinking yesterday at Citi Field).

Tale of the Tape and The Picks after The Jump:

I can't believe you idiots are so desperate for content that you've asked me back to do this crap.

Soccer?  Are we really talking about soccer?  The stupid game will end in a fucking tie OK...it's a communist sport.  They should start with the penalty kicks and not play the first 90 minutes.....

Though I share Varmint's disdain for The Beautiful Game and the flopping Euro pansies who play it, I am proud to be an American puppy. 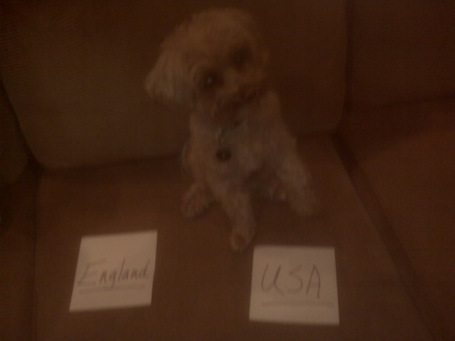 But why did you jerks have to use such a bad camera this time?  I'm much cuter in person.