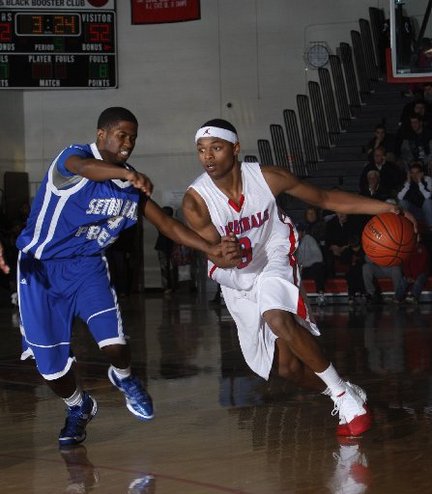 Tyrone Johnson is close to narrowing down his list of possible suitors reports Adam Zagoria. Johnson is a 6'3'' point guard out of Planfield, NJ and is rated the 69th best prospect in the Class of 2011 by Rivals. Johnson has received interest from many schools, including Georgetown, Villanova, West Virginia, Connecticut, Rutgers, Seton Hall, Georgia Tech, and Miami.

Zagoria reports that Georgetown and Villanova are the two favorites on that extensive list.  When asked about Georgetown, Johnson had the following to say:

"It was good having [Georgetown] recruit me as a freshman.  I visited Georgetown a month ago.  It was real good. They like me a lot and the role I play now. Just come in and play."

Johnson will officially narrow his choices in July.

This is certainly welcomed news, especially after many worried how the departure of David Cox would affect recruiting in the Class of 2011.