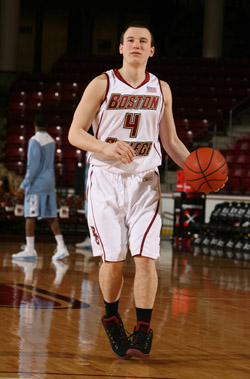 The Deseret News is reporting that 6'2'' guard Brady Heslip is considering signing with the Hoyas next season.  The article states:

In a phone call with the Deseret News Thursday morning, Heslip said he has taken Oregon and Boise State off his list and it's now down to just Utah State and Georgetown.

"Utah State, right now, is at the top of my list," Heslip said. "But Georgetown has been calling me and wants to try to set up a visit."

I find this recruitment very odd, especially considering that Georgetown is loaded at the guard spot even after Freeman and Wright graduate and is going after top-rated talent in Tyrone Johnson and Quinn Cook.

Heslip is transferring from Boston College, where he joined the team midseason.  Rivals ranks him as a 3-star prospect and lists Georgetown as a team that had offered the guard out of high school.  ESPN states:

Heslip has burst onto the recruiting scene with his tough hard-nosed play and his ability to shoot the basketball. He has a great stroke from deep and plays with a great pace and confidence. On this team (Team Canada/Adidas Nations) he played off the ball because of Cory Joseph, but showed his point guard skills when he got the opportunity. He understands how to play and is a high percentage decision maker. He has a good handle and is able to get by his defender with deceptive quickness. He moves well without the ball; he uses and reads screens and does a nice job spacing up off the ball in transition or off penetration. He showed a solid mid-range game after lifting his defender with a shot fake and can make a floater over the bigs. This kid has savvy and leadership qualities that should make him an asset to any program.

And in an attempt to find out everything on the internets about the young chap, here is a poorly recorded video of him playing with a basketball.

Heslip has a good attitude about the whole transfer dynamic, stating:

"Wherever I go, when I get there it's going to be hard to earn playing time," Heslip said. "I understand that and that's what I want. I'm not going anywhere with the promise of playing time. When I get there, I'm going to work hard and do my best to get out on the floor."

Lot of things I don't get about this news, but Georgetown could potentially have 13 scholarship players next year for the first time in awhile.  What, if anything, does this say about our recruitment of Cook and Johnson?  Cook is a DC Assault player, was he turned off by Cox's departure?  Johnson announced he was visiting Rutgers a week after the Cox announcement.  Is this a sign of things to come?