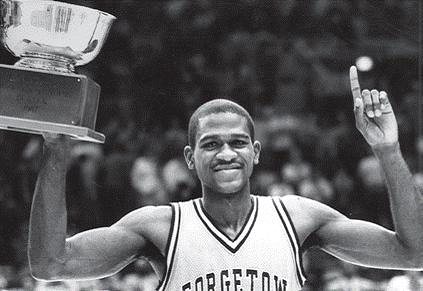 The Washington Post is reporting that Reggie Williams has been hired as the new boys' basketball head coach of Archbishop Carroll High School.  The Post states:

...Williams, who spent 10 seasons in the NBA, had a tough basketball season this past year. He previously had been the coach at Jericho Christian, which closed before last school year. Williams then was hired to coach at Towson Catholic, which also subsequently closed before the school year.

Finally, Williams was hired just before the season to be the coach at Chesapeake College, a junior college on the Eastern Shore. The Skipjacks finished the season 6-16.

Williams was hired by George Leftwich, a former high school teammate of John Thompson Jr. at Carroll.  Leftwich was also one of the first assistant coaches at Georgetown under Thompson, but stayed only one season.  Leftwich's son, George Leftwich Jr., led the #16 Princeton Tigers to a near upset of the #1 Hoyas in the first round of the 1989 NCAA Tournament, the closest any 16-seed has come to beating a 1-seed.  I think this is when I am supposed to say small world or something lame and cliche like that.  Good thing I didn't.

(More on Williams after the Jump)

Williams is one of the greatest Georgetown players ever.  The two-time All-American ranks third on the Top 100 Players in Georgetown History list and is #3 in points, #6 in rebounds and #6 in steals over his career.  He led the Hoyas as a freshman in the 1984 NCAA Tournament Championship game with 19 points, 13 of which came in the second half.

In case you were wondering if this helps Georgetown on the recruiting front, it doesn't, for now at least.  There are no immediate Carroll prospects on Georgetown's radar.  Carroll is no longer the basketball powerhouse it once was but it plays in the uber-competitive WCAC, home to DeMatha, Gonzaga, St. John's and others.  Things can change easily.

Overall good news for Reggie and the Georgetown family.  Seems like former players are all over the news today...