The NCAA released attendance figures for the 2009-10 season.  As seen below, Georgetown ranked 5th in the Big East and 29th in the nation. 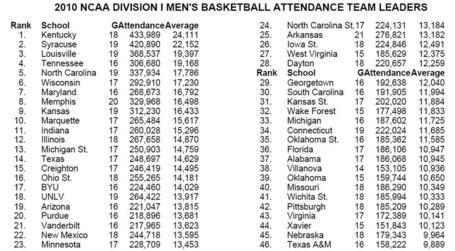 (More on attendance after the Jump)

It is unclear how many of those 12,040 spectators Georgetown averaged per home game actually cheered for the home team.  That is an entirely different problem, one that the Hoya Hoop Club discussed at their recent executive meeting.  We will have more on that as the off-season rolls along.

The Big East ranked 4th amongst conferences, averaging 11,014 per game, behind the Big Ten, SEC and Big 12.  The Big East Tournament drew the second largest average attendance amongst conference tournaments.  More interesting stats can be found on the NCAA website, like the fact Georgetown was top 20 in the nation in terms of total attendance, including home, road and neutral games.