The Truth Behind Jim Calhoun's "Leave of Absence"

Share All sharing options for: The Truth Behind Jim Calhoun's "Leave of Absence"

Last week's news about Jim Calhoun's new 5-year extension to remain the coach at UConn didn't shock anyone and basically means that Jim Calhoun gets to keep his job for as long as he wants it.  What's fair is fair and the man did bring two national championships to a women's hoops school.  Of course, earning those rings required the services of countless legends ranging from players stealing laptops to coaches who raise hell over kid's summer camps. 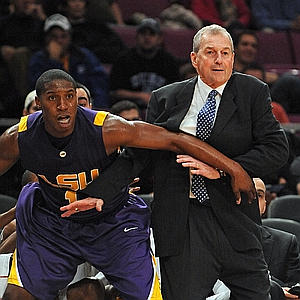 Calhoun teaching the fundamentals of boxing out

There's no secret that we here at Casual Hoya don't respect the man who famously wouldn't give a dime of his contract back, but it's interesting nonetheless to learn that the recruitment for the incoming class was done with the usual style and grace that we've come to expect from Calhoun and the Huskies.

Calhoun's Leave of Absence explained after "The Jump":

Calhoun took a well-publicized mideason "break" during this year's team meltdown, and party line was that it was due to Calhoun's recurring health issues, the health issues that have caused Calhoun to miss quite a few games over the past few years.  The larger story (in spite of the Hartford Courant's denial) was that it came about after a postgame pushing and shouting match with current UConn junior Charles Okwandu . Realistically, if Okwandu, a 7 foot 255 pound junior can't fend off a weakened old man like Calhoun, something's seriously wrong (and it explains why he's taken only 33 shots in his first 2 years), and maybe Calhoun was simply regretting ever recruiting the stiff.  But that's beside the point.  The real takeaway here is that Jim Calhoun was involved in a pushing and shouting match with one of his players.

At least some of the coaching community thought that this would spell the end of Calhoun's stay in Storrs; after all, physical confrontations have ended the reign of other national championship winning white men.  But this time, other coaches were on the prowl like sharks in the water.  Through an impeccable source, we've learned that immediately before Calhoun signed his extension, at least one SEC school began making calls to see whether an incoming UConn recruit was interested in moving on to a school where the coeds aren't 1) bundled in overcoats 365 days a year or 2) physically manhandled by their coach. [Casual Note: Is there ever a reason to turn down the SEC and head to Storrs?]

So what does this tell us? Not much new. UConn cheats and SEC schools do the same, college basketball recruiting is an ugly game and coaches are willing to do whatever it takes to get ahead.  But where there's smoke, there's often fire, and the next time Calhoun leaves UConn's bench citing health reasons, it may very well be that the health of his tenure and UConn's program is at stake.