Share All sharing options for: Georgetown Lax Screwed by NCAA...Again!

According to this piece in Lacrosse Magazine (yes, it exists), despite defeating nationally ranked Big East rival Villanova on Saturday, the Hoyas were once again tossed aside by the NCAA Selection Committee for the 2010 Men's Lacrosse Championship.  To make matters worse, it appears that the team that made the Tournament ahead of Georgetown was Notre Dame, a team that the Hoyas beat during the regular season. 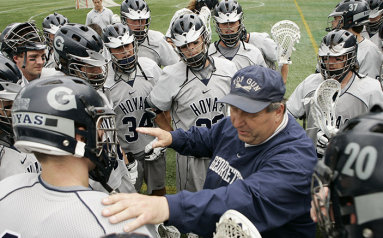 Hoyas Lax Screwed after The Jump:

The Hoyas fell into a trap similar to Loyola last year -- a strong RPI (10) and a sound strength of schedule (12). But the Hoyas didn't snag a truly notable victory along the way, and it would seem that's what vaulted Hofstra (beat Johns Hopkins), Loyola (beat Georgetown) and Notre Dame (beat Duke) into the field.

Undoubtedly, that would be the Hoyas, who missed the NCAA tournament for the third straight season. The most vexing situation for Georgetown was its victory over Notre Dame -- as well as defeats of Villanova and Rutgers, teams the Fighting Irish lost to -- and still
sitting on the outside in favor of its Big East brethren.

The committee's decision also had coach Dave Urick thinking of two years ago, when the Hoyas beat Duke in the regular season but was nonetheless excluded from the tournament. Quality wins, it would seem, meant more this year than then.

"I think the consistency or lack of consistency is the thing that is most difficult to deal with," Urick said. "Our RPI, it was my understanding it was very good, and they selected a team that had we had a conference tournament, Notre Dame would not have been in a tournament. Notre Dame has losses to two teams we beat. Head to head, we beat Notre Dame. It's disappointing to say the least. I feel most sympathetic to our seniors. I think these kids deserved a better result."

I'm not a big Lax guy so I'll leave it to those more involved to opine on the NCAA decision.  In case you're wondering, the UVA men's team that had an "alleged" murderer on its roster is the #1 seed.