The Greatest Two Minutes in Sports: A Casual Look at the 2010 Kentucky Derby

Share All sharing options for: The Greatest Two Minutes in Sports: A Casual Look at the 2010 Kentucky Derby

Last year I was in Houston for a friend of mine's wedding on Derby Day (note: this was the 2nd of my 'friends' to have a wedding on Derby Day which is effectively like kicking me in the nads), and because I was the only one with a sportsbook account, I was happily placing illegal bets with my online funds in exchange for my friends' cash.  I did so knowing that it was a shot in the dark that any of their bets would acually come through, because horse wagering is ostensibly a crapshoot no matter how much time and energy you spend pouring over the past performance charts of the entries into a race.  One of the more drunk of my friends told me to place $25 to win on a horse named Mine That Bird, a 50-1 longshot that looked more like a donkey than a thoroughbred.  I happily took the $25 and planned to spend it on booze at the bar, except just over 2 minutes after the race began I ended up owing this douche $1,250 because the donkey won.  Great wedding.  There was another time when another one of my friends won over 5K by nailing a $1 trifecta box on the 2006 Derby, the OTB wouldn't pay him because he didn't have the proper documentation to fill out a tax form, and his friend who filled it out for him wound up getting audited by the IRS.  In addition, that 5K was GONE after a weekend of swimming in champagne at VIP tables in various 'bars' in NYC.  Just two weeks later, Barbaro broke his leg and eventually died.  The Derby is the best.   The point of this is that the Derby isn't just a horse race.  It is a money-making opportunity.  And we here at THE GLOBAL PHENOMENON want to help you make money. 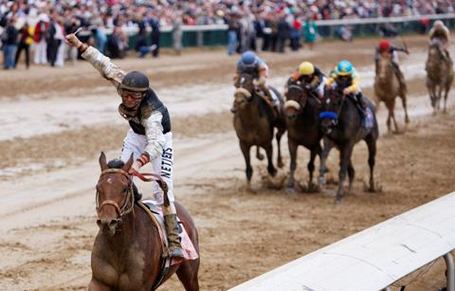 Not pictured: The horses I wagered on.

So as you get set to place your wagers on the 136th Run for the Roses, feel free to take some of the sage advice you will receive below in mind.  Just know two things about me first: 1) I am never right except most of the time, and 2) I haven't consulted the one guy I should have before I wrote this.  And we're off...

Casual Derby Preview after The Jump:

Here are the 20 horses entered to run in the Derby in order of post position:

1. Lookin' At Lucky
Odds: 3-1
Casual Thoughts: Baffert horse that has looked impressive in preps though finished a disappointing 3rd in his last race, the Santa Anita Derby.  Baffert famously threw jockey Garrett Gomez under the bus after that race, publicly questioning why he took him to the rail when the horse hasn't shown any ability to get in front of heavy traffic.  Well guess what Baffert, now you've got the rail in the damn Kentucky Derby, and it's going to take a lot for this horse to weave through the mess of 20 horses, get to the lead and maintain it down the stretch.  Assuming everything goes right this horse has the ability to finish in the top 4, but I just think it's asking too much of him.  No value at 3-1 odds.  None.

2. Ice Box
Odds: 10-1
Casual Thoughts:  Nick Zito horse ran an impressive 99 Beyer speed figure while winning the Florida Derby in come-from-behind fashion, running from 11th to 1st down the stretch.  Horses with closing speed tend to do well in the Derby where all the speed out of the gate tends to gas the burners, so assuming Ice Box can get a clean run, he should be a factor.  I would use in all exotics (tris and supers) and he could win the whole shebang.

3. Noble's Promise
Odds: 12-1
Casual Thoughts:  Purchased for a measly 10K, this horse lost to Lookin' at Lucky by a head in the Rebel but finished 5th while showing very little down the stretch in his last start, the Arkansas Derby.  Could bounce back in the Derby, but I don't think he'll get a great trip breaking from the 3 post, and he'll need all the breaks he can get.  TOSS.

4. Super Saver
Odds: 15-1.
Casual Thoughts:  This horse has Street Sense written all over it, with Borel on the mount to a closing running style that is suited perfectly for the Derby.  Since Pletcher owns it he probably won't win, but I like Super Saver to be in the mix and at 15-1, there's value in him.  He's won at Churchill before.  Include in exotics.  Great value as pick to win.

5. Line of David
Odds: 30-1
Casual Thoughts:  Won the Arkansas Derby by jumping out the the lead early and holding off all comers, but that's not how you win the Derby.  Has never shown an ability to come from behind and pass horses if off the pace, so I suspect he'll be out front early and then get run down.  TOSS.

6. Stately Victor
Odds: 30-1
Casual Thoughts:  Career best Beyer of 95 in the Blue Grass offset by nothing higher than 81 anywhere else.  Will likely be one of the longest shots on the board.  TOSS.

7.  American Lion
Odds: 30-1
Casual Thoughts:  A speed horse who likes to run to the front, Lion will need to turn in a remarkable effort to win the Derby.  And by remarkable, I mean every other horse needs to fall over.  TOSS.

8.  Dean's Kitten
Odds: 50-1
Casual Thoughts: Has already run 11 times in career and looks to be overmatched in this one.  Like Mine That Bird last year and Giacomo in 2005, this horse has NO CHANCE to win the Derby.  NONE.  TOSS.

10.  Paddy O'Prado
Odds: 20-1
Casual Thoughts:  With Kent Desormeaux on board you just never know.  I don't think Paddy is a threat to win the race, but he could if the track is sloppy as expected. Paddy could pop up at the bottom of tris or supers.  He has apparently looked great this week, I love his running style, and I always look out for those gray horses to be threats.

11. Devil May Care
Odds: 10-1
Casual Thoughts:  The last filly to run in the derby was Eight Belles, who had to be put down after the race.  The fact that she's a Pletcher horse with 'tactical speed' and that fellow filly Rachel Alexandra impressed so much last year is likely resulting in her 10-1 odds, but I just don't think there's much value here.  If the chick beats me, she beats me.  TOSS.

12. Conveyance
Odds: 12-1
Casual Thoughts:  A gray Baffert horse who is a burner and will certainly be in front at some point, though I suspect will get run down as the distance of the Derby begins to take its toll.  Will probably have to go wire to wire to win the thing, but past speed figures are good enough that he could be a threat to fall into the bottom of exotics if the track is sloppy.

13.  Jackson Bend
Odds: 15-1
Casual Thoughts:  Cool name for a remarkably consistent horse that hasn't won a race since October 2009, but has finished 2nd in every race since.  Dropped a 100 Beyer last year and has leveled off in the low 90s, he may be able to bite off a piece on Saturday.  Zito horse whose sire is named Hear No Evil and dam is named Sexy Stockings.  Casually.

14. Mission Impazible
Odds: 20-1
Casual Thoughts:  Awful name, just terrible.  Why not Mission Impossible?  Mission Possible?  Mission Unpassable?  The horse's mom is named La Paz, that's why.  Mission's best race to date was his last prep in winning the Louisiana Derby, but that field that included something called Mr. Mardi Gras wasn't that impressive.  Nonetheless, his stretch drive in that one was something to behold, and if he closes like that in the Derby, he could be a factor.

15. Discreetly Mine
Odds: 30-1
Casual Thoughts:  This horse will need the lead early to propel him around the track, and I don't think he has shown the speed among his peers to grab it.  TOSS.

16.  Awesome Act
Odds: 10-1
Casual Thoughts:  Impressive 98 Beyer figure in winning the Gotham was followed by a pretty solid 93 number in his 3rd place finish in the Wood Memorial.  This horse has sneaky speed, and if he can get a clean trip I suspect he can make some noise on Saturday.  He apparently has looked iffy during prep work at Chruchill this week, however, so I'm hesitant to use him.

17. Dublin
Odds: 12-1.
Casual Thoughts:  Dublin's dad is a horse by the name of Afleet Alex, who would have likely won the Triple Crown but for that freakish early pace in the 2005 Derby that crushed the field down the stretch and allowed Giacomo to rumble to the wire first.  Alex won the Preakness by 5 lengths after nearly falling down at the top of the stretch, and romped to a Belmont win in one of the more convincing performances I have ever seen.  Don't believe me?  Here it is (the magic happens at about the 2:20 mark).  Now, Dublin isn't Afleet Alex, but blood is blood, and I'll take the blood of a champion at 12-1 odds or better any day.  A D. Wayne Lukas closer with good speed on a sloppy track? Love, love, love.

19. Homeboykris
Odds: 50-1
Casual Thoughts: This horse has the 'just happy to be here' vibe after making the field due to an injury to Endorsement the morning of the post draw. Homey don't play that. TOSS.

20. Sidney's Candy
Odds: 5-1
Casual Thoughts:  The toughest horse in the field to predict, I would like this guy better if he didn't draw the 20 post.  Big Brown won the 2007 Derby from the 20, but he was a legitimate superhorse with tremendous speed.  Sid has run Beyers of 95, 95, and 100 in his last 3 races (all wins), so he may have the ability to make something happen, but I don't love the value right now at 5-1.  Sid has shown in his prep races that he likes to get out to the lead and hold it, but I think starting from the 20 is too much to ask.  Or is it?

The Bottom Line:
If you're looking to win some major coin on the Derby, you don't do it by wagering $ on a horse with low odds.  You make money by nailing the trifecta or even better, the superfecta, loaded with VALUE horses that have a chance to hit the board.  With that in mind, here are the horses that will go off at 10-1 or higher that I will be including in a nice, easy, dare I say casual, $1, 4-horse trifecta box (means that it doesn't matter which order they finish so long as you get the top 3 in some fashion) for $24: DUBLIN, ICE BOX, SUPER SAVER, PADDY O'PRADO

Will any of those horses hit the board tomorrow?  Probably not, but on a sloppy track loaded with 20 3-year old question marks, anything can happen.

Happy hunting, and enjoy the greatest two minutes in sports.