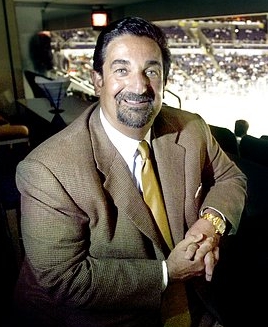 Ted Leonsis (C'77) has negotiated a deal to buy the majority stake of the Verizon Center and Washington Wizards.  Leonsis, already a 44% owner of both, will buy the remaining 56% from the Abe Pollin family for an undisclosed amount.  After the deal is approved by the NBA Board of Governors, Leonsis' sports and entertainment company, Lincoln Holdings LLC, will have full ownership of the Washington Capitals, Washington Mystics, Washington Wizards, Verizon Center and Baltimore-Washington Ticketmaster franchise.

Leonsis, a frequent courtside observer at Hoyas games, is on the Georgetown Board of Directors and will be receiving the John Carroll Award from the University this weekend.  He is also an investor in SB Nation, which means he pretty much owns or advises everything that affects my daily life.

His list of 101 Things to Accomplish in Life, which includes going to the Final Four with Georgetown at #43, is a good read and has inspired me to start my own list:

In a month filled with talk of Greg Monroe going pro, Big Ten expansion, and hostile Georgetown neighbors, I welcome this news.  Only good things can come from this as Leonsis has established a reputation of being a very fan-friendly owner with extensive local ties.  He is one of the most successful Georgetown alums ever and an avid Hoyas fan - which can only bolster Georgetown's position in the Verizon Center events pecking order (looking to move ahead of the Jonas Brothers).  In fact, in his My Life 365 interview with Ronnie Thompson, Leonsis listed his parents and Georgetown University as being the most important influences in his early life.  Great news all around.

Ted - this Casual Headband is for you.