The Final Four - Who You Rollin' With?

Share All sharing options for: The Final Four - Who You Rollin' With?

It has been well documented that the last three weeks have sucked for us.  We lost to Ohio, then watched the "Bracket of Death" die slowly, with Kansas getting ousted in the 2nd round, clearing the path to what would have been a fairly painless Final Four run.   But again, we lost to freakin' Ohio.

Nevertheless, there are games to be played Saturday night, and you need to have some sort of rooting interest if you are going to watch.  Here's how you should be cheering. 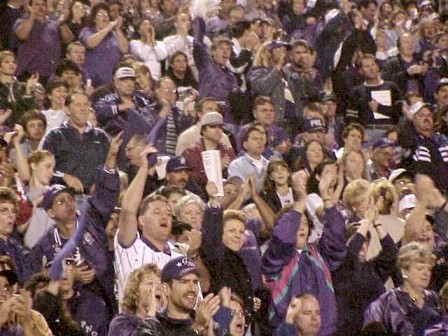 After the Jump, we tell you who you should and shouldn't root for.

Nolan Smith's heartwarming story about honoring his late father.  Even the most cynical Duke hater can't help but be moved when reading about Nolan's story.

We demolished Duke in front of Barack Obama and Joe Biden.  Like literally demolished them.  If Duke wins it all, we know we are the best team in the country, at least by the transitive property.  That's how that works right?

It's Duke.  You can't actually cheer for Duke.  SB Nation's own Andrew Sharp methodically destroys the program in this epic article, just in case you need any more reason to hate the Blue Devils.

Don't cheer for Duke, or you'll be similar to a 12-year-old me, who was a moron.

They are in the Big East.  Our conference had a miserable tournament, with Georgetown, Villanova, Marquette, Notre Dame, Pittsburgh and Louisville not advancing past the first weekend.  A West Virginia national title will redeem our beloved conference.  And they aren't Syracuse.

Dan Wetzel of Yahoo! writes a pretty compelling article about good old Huggy Bear. Joe Posnanski follows Wetzel with another awesome article.  And Huggins one time drank beers with our own itsallthatmatters, which is also a pretty fun story.

West Virginia fans are terrible, Bob Huggins is a drunk, "Take Me Home Country Roads" is awful, and The Smoking Musket is the worst college basketball blog IN THE WORLD.

If you are focused on the Big East's reputation, cheer for West Virginia.

I have a huge man crush on Tom Izzo.  Michigan State always performs well in the tournament.  It's very impressive that they got back to the Final Four without Kalin Lucas.  They knocked out Maryland.

They are boring as hell to watch.  The Big 10 sucks.  They aren't very good.  We didn't beat them this year.

No real point to cheering for them, unless you want the Legend of Izzo to grow.

They are playing in front of their home crowd.  They have the Hoosiers angle.  Their coach looks as young as me.  We demolished them at Madison Square Garden.  They play a fun brand of basketball, and give hope to teams that don't have huge football revenues (ahem Georgetown).  Gordon Hayward is likeable and goofy.  They knocked out Syracuse.  Their blog, the Dawg Pound, is great and agreed to answer our questions two times.  Their mascot is the Bulldog, our mascot is Jack the Bulldog.

No real cons for cheering for Butler other than they aren't from the Big East.

Cheer for Butler.  We beat them, so we know we are the best team in the country if they win, their blog agreed to two Sleeping With The Enemy features and THEY KNOCKED OUT SYRACUSE.

So there you have it, for this weekend, Hoyas are Bulldogs.