Share All sharing options for: Greg Monroe Declares for the NBA Draft 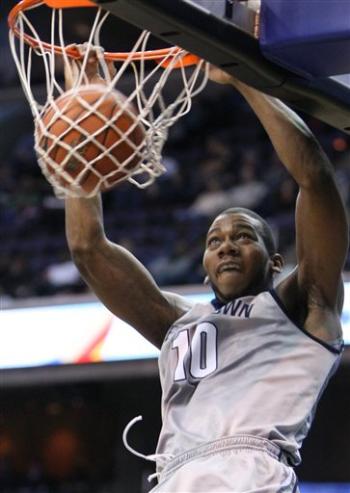 Georgetown big man Greg Monroe has declared for the 2010 NBA Draft.  He plans to sign with an agent and will not be eligible to return next season.  Monroe is the first Georgetown underclassman to declare for the NBA Draft since Victor Page in 1997.

Monroe played two seasons for the Hoyas and racked up numerous accolades including Big East Rookie of the Year (2009), All Big East First Team (2010) and Pete Newell Big Man of the Year (2010).  This year he averaged 16.1 points, 9.6 rebounds and 3.8 assists a game and set a Big East record for a big man by tallying 12 assists against Providence.  He had 14 double-doubles, scored in double digits 30 times, and had 15 games with double digit rebounds.  He also led the team in scoring 13 times, rebounding 30 times and assists 15 times.

It is sad to see him go, and questions will always linger about the potential for next year's team had he stayed, but this was the right decision for him.  By all accounts, Monroe will be a lottery pick in this year's draft.

This will be the fifth player John Thompson III will have had drafted in his six years at Georgetown.  Georgetown has had more players drafted in the past four years than any other team in the Big East and along with Syracuse, is the only team to have a player drafted each of the last four years.