Is Greg Monroe Coming Back To Georgetown?

Share All sharing options for: Is Greg Monroe Coming Back To Georgetown?

As the April 25th deadline for underclassmen to declare for the NBA Draft draws closer with easing passing day, we can't help but wonder whether Greg Monroe is actually considering sticking around for one more year on the Hilltop.  While nearly all of the underclassmen rumored to be bouncing early to start getting paid more than they did in college have given some indication whether or not they are doing so, Monroe has been strangely quiet.  Almost too quiet. 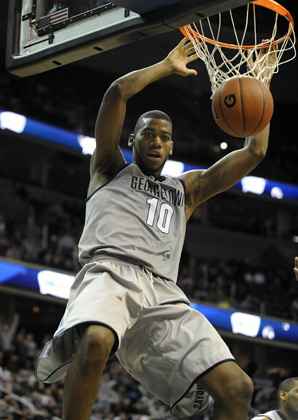 In a heroic act of actual journalism, we here at THE GLOBAL PHENOMENON contacted an anonymous source close to the 6'11" sophomore to try to get a sense of which way he's leaning.  Our source has seen Monroe play hoops since Greg was 14 years old, and while our conversation didn't provide a definite answer to the question we're all wondering, it did reveal some interesting information that could provide credence to those championing the belief that Monroe will indeed be back at Georgetown for his junior year.

Continued after The Jump:

- The source was pleased with Monroe's development in his sophomore year, as he was more aggressive on both ends of the court and as a vocal leader.  While the source says he has told Greg to dunk the ball more often, Monroe maintains that he's 6'11' and doesn't always need to.  The source equates his demeanor to Tim Duncan's, since he doesn't like to show people up on the court.

- The passing ability Monroe possesses is natural and he's had it since our source first set eyes on him when Greg was a youngster.   Put simply, Monroe likes to pass.

- Greg chose to attend Georgetown primarily due to JT3, as he was comfortable with him as both a role model and mentor.  Monroe is actively involved in the church in his hometown, and Georgetown's reputation as a religious school that happens to have some success developing big men weighed heavily in his decision.  (I note here that the prevailing wisdom in Louisiana is that if LSU had an African-American head coach at the time Greg was being recruited, Monroe would have worn the purple and gold and been a one and done in Baton Rouge.)

- After Monroe's freshman year at Georgetown he felt he was in no way ready to perform at the next level, enjoyed his teammates and the coaching staff, and was excited to return for his sophomore season.

- While our source doesn't know whether Monroe will go pro, he did add that Greg is a very competitive and thoughtful person, who will make his own decision - a decision that will be supported by his primary mentors, his mother and uncle.  Greg feels that ultimately players are judged by their success in the playoffs, and the disastrous loss to Ohio coming on the heels of last year's NIT appearance have stung him.  In his junior year in high school, Monroe's squad lost early in the State playoffs, and Greg was determined to come back in his senior year and win it all - and that's what he did.  He said to Greg, legacy is important.  He said that Greg feels he has things left to accomplish at Georgetown and that success both at the college level and in the NBA would mean a lot to him personally and for his supporters back home.
Now the last thing I want to do is to start getting your hopes up that Monroe will be back, because I still can't fathom a scenario in which it makes sense for him to not at minimum declare for the Draft and not hire an agent.  Hoyas fans have been down this road with Jeff Green just 3 years ago, and we were painfully tormented as the Draft declaration date approached and Jeff wavered between between going pro or returning to Georgetown, a choice that would have virtually guaranteed Georgetown a National Championship but ultimately resulted in the burgeoning legend of this guy.  BUT...as the list of impressive underclassmen in the Draft grows larger and draft experts continue to slot Monroe towards the bottom part of the top 12, could Monroe be considering that should he return for his junior year the Hoyas will be a top 5 team, favorites to win the Big East, and he would be a likely top 5 pick in 2011?  Will a sure-fire lottery pick turn down an instant payday and risk injury for a chance at collegiate postseason redemption?