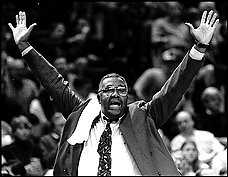 Tragic news out of Washington, DC today.  It seems that John Thompson Jr., the patriarch of Georgetown basketball, has eaten freshman swingman Hollis Thompson.  Hollis, who has no relation to Big John or current Georgetown coach John Thompson III, was 6'7" and a svelte 94 pounds.

Find out more about the event after the Jump.

"We knew Big John was upset with our performance in the NCAA Tournament and he kept muttering ‘I'm going to eat these kids for breakfast', but we assumed he was speaking metaphorically," explained junior guard Chris Wright.

The rest of the basketball team was as shocked as Wright by these recent events.  "Big John shows up to every practice and growls the entire time, but it's usually focused on us big men, I've never seen him even talk to Hollis.  That's what makes it so weird," remarked freshman forward Jerrelle Benimon.

To delve deeper into the developments, we have pieced together a rough account of what happened in McDonough Gymnasium earlier today.  It seems that practice started on time at 10:30 am.  The schedule included some layups, a three man weave drill, and then some casual scrimmaging.  Because sophomore center Greg Monroe is back in New Orleans on Easter break, Hollis had to step in and guard Julian Vaughn.  After Vaughn got three putbacks in a row, Big John seemingly exploded.  The dialogue that took place is below:

Hollis:  Yo old man, back up, you can barely walk.  I was 5 years old the last time you were relevant.

JT Jr:  Oh you think I'm not relevant?  How relevant will I be when I whup your skinny behind?

Hollis:  Man, I'll deflate your head faster than that basketball you used to keep in your office.  Tired old man with cliché ideas.

From there what ensued was described as "disgusting", "disturbing" and "impressive".  Big John, hungry for lunch, swallowed Hollis in two big gulps, then screamed "Anyone else think I'm an old man?" as he hobbled off the court.  JT3 was able to keep his cool, steady demeanor throughout the events, only remarking "Sometimes bigger guys eat littler guys, just the way it goes."

As news spread throughout campus of Hollis' demise, freshmen girls were unequivocally crushed.  "He was just so cute and nice, with that laid back Cali swagger," explained Katie Rogers, who spent many nights grinding on Hollis at Rhino.

For the Hoyas, this marks another year of offseason tumult.

With Monroe's NBA decision looming, the Hoyas could be losing 2 of their top 6 performers from the 2009-2010 squad.

More than losing a player for next year's roster, the team was crushed to lose a friend.  "Hollis was mad cool.  He loved skinny jeans, which was the main reason he stayed so skinny throughout the year.  He had big plans to put on weight this offseason and restock on bigger skinny jeans when he got back to California, but Big John never gave him that chance," explained a tearful Julian Vaughn.

President Jack DeGoia and Interim Athletic Director Dan Porterfield could not be reached for comments.