Share All sharing options for: Aaron Bowen Commits to Georgetown 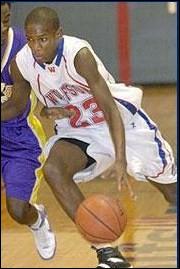 As previously reported, Aaron Bowen, a 6'5'' wing out of Jacksonville, Florida, has given a verbal commitment to play for Georgetown next year.  NBE Basketball reports:

Pitts told NBE last week that Bowen averaged 17.5 points a game along with 6 rebounds and 4 assists, but his biggest improvements since arriving at QEA came on the defensive side of the floor.

"[He] has learned to become a better defender and he competes every play," said Pitts.

More on Bowen after the Jump

Bowen had originally committed to Marquette in 2008 but re-opened his recruitment after assistant coach Dale Layer left the Golden Eagles.  He choose Georgetown over Florida, Florida St., Duke, Providence and others.

ESPN had the following to say about the slasher after watching him in December:

Bowen is a long and lean wing that played well at the Kreul Classic in December. He has great length and can score over smaller defenders with ease. Bowen sprinted the wing in transition where he hit spot up jumpers from behind the arc or finished above the rim when ahead of the pack. He can hit the open three when set in the half court by spacing to the open area or coming off screens. He also displayed good touch and body control along the baseline when he received drop off passes created by dribble penetration. Bowen also had a presence on the offensive glass where he had a couple nice tip ins. Bowen is capable of defending both wing positions as well. He must add strength and be more consistent to take his game to the next level but he has the size and skill to be an excellent college wing.

Rivals ranks him as the 29th best small forward in his class and 129th best player overall, while this site labeled him the 4th best player in Florida.  He has since moved to North Carolina to complete his senior year.

Marquette blog, Cracked Sidewalks, reported that Bowen went under the radar of most programs and recruiting services due to an injury during the summer of 2008.

Bowen joins guard Markel Starks and forward Nate Lubick in Georgetown's Class of 2010.  There is one scholarship remaining and Georgetown is still pursuing big man Moses Abraham, who is set to announce his decision next week.  With the addition of Abraham, this could be one of Georgetown's most well-rounded recruiting classes since the Class of 2004 which brought the Hoyas Jonathan Wallace, Tyler Crawford, Jeff Green and Roy Hibbert.