The Morning After: Austin Freeman is Awesome

Share All sharing options for: The Morning After: Austin Freeman is Awesome 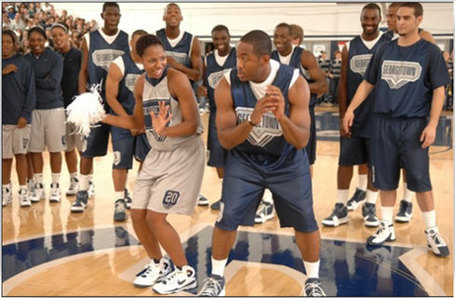 Well apologies for no post-game yesterday, we'll try extra hard this week to post while watching Georgetown play at NOON.  Awful, awful awful Big East Tourney draw, but Georgetown did what it had to do to ensure itself a first round bye.  Good news is that we ended the regular season on a win, Syracuse did not. Therefore we are better than them.  Right?

Not much post-game coverage of the early game but we'll have more on the Big East Tourney later.

Post Game Quotes - GEORGETOWN OFFICIAL ATHLETIC SITE
Georgetown Junior Guard Austin Freeman On how he felt during the game ... I'm fine, I'm fine. It was just good to be out there again and to play with my teammates and just doing what I do. It was a lot of fun to be out there. On the crowd's support ... I was happy to have their support out there. It got me going out there. I want to thank them a lot too.

Win Secures First Round Bye for Hoyas | The Hoya
Now healthy as a team, the Hoyas will look to put their 2-4 finish to the season behind them in the postseason.

Austin Freeman returns, leads Georgetown past Cincinnati - washingtonpost.com
With the win, Georgetown halted a late-season slide after losing four of its previous five games. And the commanding margin sent the Hoyas into the postseason with new confidence and no doubt about Freeman's ability to contribute. "As long as we can limit the sways in his [blood-sugar] levels, we don't anticipate" a problem, Georgetown Coach John Thompson III said. "We're going to see a lot more games this year like that."

Hoyas roll in Freeman's return, 74-47 | Washington Examiner
Considered day-to-day after returning to practice on Wednesday, Freeman's name wasn't listed in the starting lineup on the scoreboard before Saturday's game. But with one sign reading, "He who is brave is Free," and a host of students holding up a group of seven posters that spelled, "AFREE15," each carrying dozens individual messages of support, the Mitchellville native was introduced as normal and honored before the game for eclipsing 1,000 points in his career.

Early Saturday reaction and analysis: Kyle Kuric steals the show | College Hoops Journal
No. 19 Georgetown 74, Cincinnati 47. Awesome to see Austin Freeman come back from his diabest diagnosis (we still don’t know if its Type 1 or 2) and put up 24 to get the Hoyas an emphatic, punch-to-the-chin kind of win.

Hoya Prospectus: Recap: Georgetown 74, Cincinnati 47
I'm not sure what happened in the respective locker rooms at half time, but Cincinnati came out completely flat and the Hoyas were willing to take advantage of that.  For a long stretch of the Vesper half, if Lance Stephenson didn't score the Bearcats didn't:  Georgetown went on a 32-8 run where Born Ready scored all of his team's points.

Georgetown's Freeman starts, helps Hoyas knock out Cincinnati's at-large hopes - Campus Rivalry: College Football & Basketball News, Recruiting, Game Picks, and More - USATODAY.com
"Just in general, our team is healthy and we haven't been in a while," Thompson said Saturday after the win. "Now Austin, what's going on this week has been, for him personally and us, emotionally trying but at the same time I think he's still - and we're still - learning his body and how it reacts. But I think ... as long as his levels are managed we should not see any change in his performance."