Sleeping With The Enemy: Behold The Bearcats

Share All sharing options for: Sleeping With The Enemy: Behold The Bearcats

A weird and scary week for the Hoyas that started with the game against Notre Dame will come to an end with the regular season finale againat the Bearcats of Cincinnati.  As usual we here at THE GLOBAL PHENOMENON are taking you inside the ropes, outside the lines, and behind enemy territory to bring you everything you need to know ahead of tomorrow's clash.  Special thanks to The Bearcats Blog for providing the answers to our penetrating questions.  This Coors Light is for you.  Before you dive into the Q&A, please click the below to get a taste of the beautiful city of Cincinnati, Ohio.  Enjoy.

CH:  Lance Stephenson came equipped with the BORN READY nickname. After a year of watching him play, what would you call him?

I would call him PLAYS ERRATIC. He has all the talent, but he hasn't figured out how to put it all together every night. He'll put up 20 one game, and you'll think "Here we go, the light came on." And then he'll score 6 points the next game and you'll wonder if he even suited up. The Louisville game was the best example, as he scored the first 12, then put up 0 the rest of the game.

The Xavier-Cincy showdown has become one of the top rivalries in college athletics (and certainly in hoops), with nastiness even spilling into the stands. What’s the worst thing about Xavier?

I'll skip the fans are [male reproductive organs] who think Xavier's program is holier than thou because they are a Jesuit school and UC players got in trouble. Back in like '94, when Gillen was the coach, the game was really heated. Dontonio Wingfield flipped off the student section during intros, and the players and coaches cussed at each other all game. Near the end, Xavier coaches allegedly grabbed their crotches at a timeout. Bob Huggins famously didn't shake Gillen's hand, and Gillen acted like a [female dog] about it. I hated Gillen before that, but it only made my hate increase. Gillen left Xavier, like all their coaches do, but has since started doing commentary. He is the [bloody] worst, and every time I hear his nasally voice I think back to how much of a [butthead] he is, and blame Xavier for hiring him, making it possible for my hate.

More fun with The Bearcats Blog after The Jump:

Isn’t it weird that the Cincinnati airport is in Kentucky? 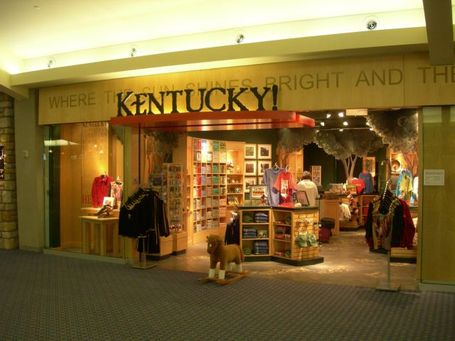 Very. Here's a fun note, that's not fun, the airport is in Boone county, but run by Kenton county. No one really wants to claim it.

Some have speculated a major realignment in college athletics should Pitt depart the Big East for the Big 10. One scenario is basically pulling all the non-football Catholic schools into one Midwest-East Coast league; where would that leave Cincinnati? Re-join Conference USA?

Probably. I have no idea where Cincinnati would go if the Big East dissolved, so it would have to be a move like that. Maybe they can be team 15 in the Atlantic 10.

I attended the Sugar Bowl in New Orleans and was impressed at the number of Cincy fans that came to the game.  They generally seemed like a lively bunch and knew how to party.  If I’m heading to Cincy for any reason, can you tell me where the cool kids hang out?

Newport on the Levee is probably the place to go. There are some bars, a good steakhouse, a comedy club. There are some shady places downtown, so don't turn around in an apartment complex, make eye contact with a guy sitting on some steps, and then quickly try to turn around. A group of guys will surround your car and scare the [bejesus] out of you before letting you leave.

Cincy had an incredible run in the 60s (strangely winning back-to-back championships AFTER Oscar Robertson left) but was fairly quiet until Huggins rebuilt the program. It’s no secret that he had some ethical challenges both personally and professionally and when he brings WVU into the gym, are most people booing or cheering?

Cheering. He got a giant standing ovation when he returned last season, and a deafening ovation when he came back on Senior Day the year he was fired. He came back when he coached Kansas State to play Xavier, and he was cheered. His being fired fractured the fanbase. Cincinnati fans were extremely loyal to Huggins, and still are to this day. When he was hired by Kansas State, stores ran out of Kansas State apparel. No one showed up to non conference games Andy Kennedy's year, and people were very slow jumping on board when Mick was hired. Even now, they won't show up. Cincinnati fans bought into Bob Huggins warts and all, and they haven't let him go.

The Enquirer’s sports writer, Bill Koch, grossly turned down our Q&A session – what do you think of his coverage of the UC basketball program?

He's alright. He doesn't say anything offensive. His blog on the website sucks, and I'm 98% sure he doesn't know how to use twitter.

What’s the best place to get Cincinnati chili and do you go four-way or five-way? 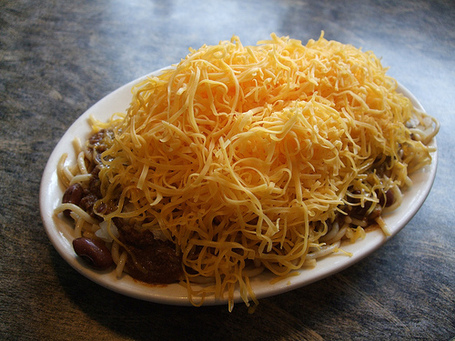 Casual Chili in the 'Nasty  via farm3.static.flickr.com

It's Skyline by far. Anyone who says Gold Star or anything else is crazy. I like the 3 way better, but 4 ways with the red beans aren't bad. I don't like onions, so I've never gone that far.

Right now Cincy is likely on the outside looking in to the Tournament.  If the Bearcats beat the Hoyas on Saturday, make an argument as to why the ‘Cats should be in the field.

I'm not sure that one can be made. The only way I think they have a shot is if UC gets to 19 wins. The wins over Maryland and Vanderbilt aren't enough. Cincinnati hasn't beaten a team who's been ahead of them in the standings so far.

I have to go with Stevenson. I love Kenyon Martin, but the lip tattoo is kinda [whack]. And it makes me sad that he's so whipped.

How do you see this game playing out?  Final score prediction?

I see it being ugly when both teams go 6 minutes without scoring. The way UC has gone this year, they'll have a chance to win, but miss an open 3, and give up an open shot for the Hoyas. I think the Hoyas are going to win 66-61.