Share All sharing options for: The Top 10 SMH Moments of 2009-2010 Georgetown Basketball

Between Midnight Madness way back in October of 2009 and present day, much has happened.  Some healthcare bill got passed, some golfer engaged in extramarital affairs, some TV show captured the hearts and minds of America, some blog became THE GLOBAL PHENOMENON.  Most of all, these past six months marked the meteoric rise of the phrase SMH, which is defined by Urban Dictionary as:

Acronym for "shake my head" or "shaking my head." Usually used when someone finds something so stupid, no words can do it justice. Sometimes it's modified to "smfh" or "smmfh" by those that prefer profanity in their internet acronyms.

For many Georgetown fans, this season could be defined by just three letters.  SMH.  The highs, the lows, the laughter, the tears, the love, the hate, the soaring wins, the crushing losses.  SMH.

Without further ado, the top 10 moments of the season that made me Shake My Head.

Not enough was made of this because the loss was so damn heartwrenching, but that dunk was insane.  Speaking of insane?  How about the way THE GLOBAL PHENOMENON treated Wright this season?  Wright's inconsistent play at times paled in comparison to the schizophrenic way we handled him.  Stepping back, all he did was average 15 points, 4 assists, and a measly 2 turnovers per game while playing more than 35 minutes.  More than that, he was so clearly the only player who gave it 100% every game out that we named an award The Chris Wright Heart of a Champion award.

9.  The emergence of Julian Vaughn and Jason Clark

The two starters who stepped in for DaJuan Summers and Jessie Sapp were inconsistent at times, but completely outperformed expectations.  Vaughn was huge in victories over UConn, Washington and Villanova.  He seemed bothered by injuries at the end of the season, although he had the single most badass Associated Press report during the Big East Tournament game against South Florida.

After a timeout in the first half, the 6-foot-9 junior walked over to a bucket sitting courtside and promptly vomited. Vaughn didn't even bother to get a drink of water, wiping his face on his jersey and heading back onto the court moments later.

When I vomit I usually end up spending most of the rest of the day curled up crying with my thumb in my mouth.  When Julian throws up, he continues to play in the Big East Tournament.  That's admirable.

Jason stepped into his role very nicely, averaging more than 10 points per game and having the wonderful task of locking down the other team's top scorer.  He led Georgetown with 24 points in a victory over Villanova, and was our second most consistent three point threat throughout the year.  Alliteration is fun.

8.  The passion of the male cheerleader

Eric Cusimano deserves a round of applause.  I'd argue he was Georgetown's most consistent performer this year outside of Austin Freeman.  No one, and I mean no one, screams a more hearty "We Are...Georgetown".  No one tosses t-shirts with more verve and pizazz.  We've gotten word that Eric is a senior this year, and we will be sad to see him go.  I'd like to see him enroll in grad school at Georgetown so he can continue cheering. 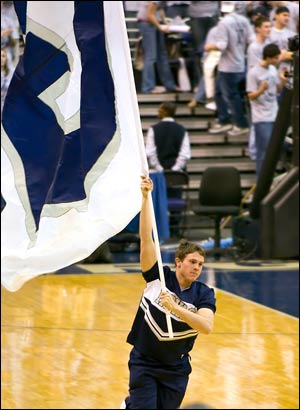 My expectations for Sanford and Benimon at the beginning of the season consisted of hoping both had pulses.  What else was I supposed to think?  We signed them both in the spring, seemingly in a panic when it became clear that we had 7 scholarship players.  Somehow, Benimon became the 6th man on a team that was in the top 15 for most of the year.  Sanford showed a knack for getting steals, knocking down sweet floaters, and rocking a nice flat top.  All three of these things I respect very much.

Just remarkable.  Rutgers was 15th in the Big East and a team we beat by 25 less than a month before the Valentine's Day Massacre.  Mike Rosario salsa danced on the scorer's table just 5 feet away from me.  I still see that image and no amount of Clorox will make it go away.  Well guess what?  You are getting a taste of it too.

We've said it, JT3 has said it, Jim Boeheim has said it.  #10 is probably the best passer in all of college basketball, regardless of size.  If he played his last game in a Georgetown uniform, may as well salute him for his preternatural ability to know where his teammates are at all times.  My next challenge for him is to use preternatural in one of his English classes next year on the Hilltop.

The social media site is the gift that keeps on giving.  We found out that Jason Clark's laptop is the size of a paperback book, that Henry Sims is the funniest college basketball player alive, that Austin Freeman likes steaks, and that #savagelife was much more effective a movement than #swaglife, among other things.  Twitter rulez.

My crappy prose will not do Freeman's season justice, so I'm going to let the numbers speak for themselves. From December 23rd to February 23rd, Austin scored less than 15 points just once, in a win at Pittsburgh.  Austin scored 28 second half points to lead Georgetown to a stirring comeback over UConn during that time.  He scored 25 points on 12 shots in a win over then #2 Villanova.  He scored 29 points on 12 shots in a road win over Louisville.  He scored 20 points on 11 shots over Duke in front of President Obama.  He shot 53% from the field, 86% from the line, and 45% from three.  He averaged the most points in a season (16.5 ppg) for any player in the JT3 era.  Oh, and he was diagnosed with diabetes in the middle of it all.  After that life-altering news, he came out and scored 24 points against Cincinnati and helped lead Georgetown to the Big East Tournament finals.  Another year of watching Austin play makes me downright giddy.

2.  Losing to Ohio in the 1st Round of the NCAA Tournament

Ohio was 7-9 in the powerful MAC conference.  They dismantled us, scoring the most points against a JT3-led Georgetown team, and the most points against the Hoyas in NCAA Tournament history.  Other notable teams we've played in the NCAA Tournament include Michael Jordan's UNC, Hakeem Olajuwon's Houston, Larry Johnson's UNLV, Christian Laettner's Duke, Marcus Camby's UMass (well not really because that team doesn't technically exist), Joakim Noah's Florida, Greg Oden's Ohio State, and Tyler Hansbrough's UNC.  And Ohio, led by two midget guards, scored more points than any of those teams.  Ohio.  Yes, Ohio.  Do I need to say it again?  Ohio.

1.  2 victories over Final Four teams for the 2nd year in a row

And we have 1st round NIT and 1st round NCAA exits to show for it.  SMH.