A Guide to Cheering for the Best Georgetown BET Seeding

Share All sharing options for: A Guide to Cheering for the Best Georgetown BET Seeding

All fans know that their respective rituals, superstitions and beliefs are the sole reason why their favorite teams win.  If it were not for that fact that I pounded my head against a wall for the length of every timeout during the second half of the UNC game in 2007, or had taken three consecutive shots of tequila to show support for Jonathan Wallace taking three free throws to tie the game at Marquette in 2008, we would have absolutely lost those games.  So with that in mind, I urge you, loyal Georgetown fans, to do whatever and whoever you normally do while watching the following Big East games to ensure Georgetown has the best possible scenario come Big East Tourney time.

There are eleven games left in the Big East season, one tonight, two tomorrow and eight on Sunday.  There will be plenty of jockeying for seeds 6-11, and unfortunately Georgetown has played itself into this mess.

The Hoyas are uncomfortably sitting in 7th place right now, with a half-game lead on the Fighting Irish who face the Huskies in a crucial game tonight.  There are only two remaining first round byes available.  Here are the five games that will determine Georgetown's seeding:

Cincinnati @ Georgetown, Saturday, March 6th, 12pm
A win guarantees Georgetown a first round bye, a loss can push them out of the top 8.

Notre Dame @ Marquette, Saturday, March 6th, 2pm
Another opportunity to cheer against the Irish.  If they lose both games, they will play themselves out of a first round bye.  If they win both, they guarantee themselves the 7th seed.

Louisville @ Syracuse, Saturday, March 6th, 2pm
As much as this pains me to say, we want Syracuse to win.  They have already clinched the top seed and regular season title, time to move past the rivalry and cheer for who puts Georgetown in the best position.  A Syracuse win will drop Louisville into a tie with Georgetown (if Georgetown wins), and the Hoyas own the tie-breaker.

Connecticut @ South Florida, Saturday, March 6th, 2pmThis game only matters if Georgetown loses.  A Georgetown loss and South Florida win will result in a tie between the teams, and the Bulls own the tie-breaker.  Georgetown will drop out of top half of conference standings.

Best Case Scenario:
Georgetown wins, Connecticut or Marquette wins against Notre Dame, Syracuse wins.  Georgetown will get the coveted 6 seed, which plays all games at 9pm.  The Hoyas would face the 3-seed in the quarterfinals which would be either Villanova, West Virginia or Pittsburgh.  This of course assumes they beat the winner of the 11 vs. 14 game, which could include South Florida and Rutgers.

Worst Case Scenario:
Georgetown loses, Notre Dame wins one of two games, South Florida wins.  Georgetown will fall to the 9th spot, play on Tuesday and be in the same bracket as Syracuse. 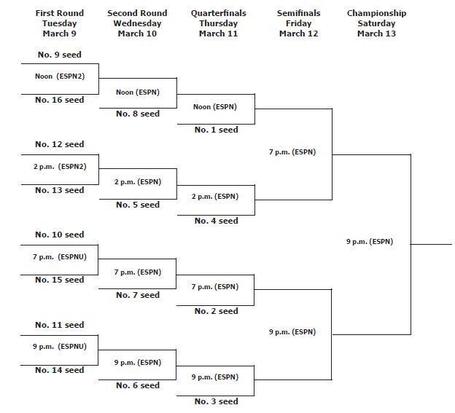 Gets even more fun if Seton Hall wins out and creates a four-way tie for the last two remaining byes.  Georgetown can still sneak into the 8th spot in this scenario, but will be lined up to play #1 Syracuse in the quarterfinals.  If you thought Verizon was Orange in DC on a weeknight, imagine what MSG will be like at noon on a Thursday.  The Cuse delinquents stay purposefully unemployed for this very scenario.  We have not beaten Syracuse in the Garden since 2000.

Moral of the story: Georgetown needs to win on Saturday.