Sleeping With Our Best Friend: Back For Sloppy Seconds With Butler!

Share All sharing options for: Sleeping With Our Best Friend: Back For Sloppy Seconds With Butler!

Maybe we here at THE GLOBAL PHENOMENON are taking a little too much joy in Syracuse's loss to Butler, but you know what, who cares!  While Georgetown's season screeched to a halt against the clearly underrated and MAC power Ohio Bobcats, let's face it, that was just so last week already.  So to get you pumped up for Butler's battle with Kansas State, here's a little catch up session with our new best friends.  Once again a special thanks to Kevin Knaus and the Dawg Pound for providing us with answers to our penetrating questions on such short notice.  Kevin, this gratuitous picture of a half naked woman in a bikini is for you.  And yes, I'd be remiss if I didn't mention that the Hoyas thrashed Butler this season in the Jimmy V Classic. 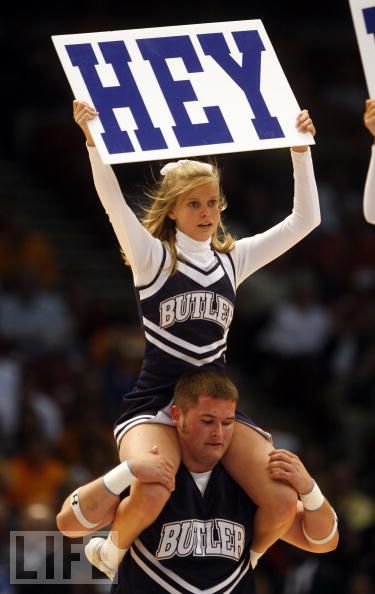 So I put my hands up, they're playin' my song, the butteflies have gone away.  It's a party in the USA!  (via cache2.asset-cache.net)

CH: What happens in Indy if Butler makes the Final Four?

First, Butler in the Final Four would be terrible for Indianapolis business. Butler fans aren't going to stay in the hotels, eat in the restaurants, or pay high prices.  They will drive to the games and drive home.  Secondly people will finally realize that, yes, Butler has a basketball team and that they should be underrated and ignored no longer, and we could only attempt to imagine the celebratory chaos that would break out on campus.

What has the atmosphere been like on campus during the Tourney run? Did more people than usual get to make out after the win against Syracuse?

The atmosphere on campus has been nothing short of chaotic.  Classes have been skipped, canceled, ignored, or let out early.  Butler apparel has been flying off the shelves and local television news crews roam campus interviewing students at will.  After the defeat of Syracuse, the main street was closed and hundreds of students poured into the rain, to dance, scream, and yes, one can only assume, make out.

More with Butler after The Jump:

How has this team changed from when the Hoyas defeated them in the Jimmy V Classic?

Led by Robert Nored and Willie Veasley, the Dawg's defense has improved since our last encounter.  Especially during the tournament Nored has stepped up offensively and been a great addition to the dynamic of the team.  Matt Howard has also decided that he does like to play more than 20 minutes per game, although layups are still optional.

Did defeating Syracuse make it any more special to you or were you just happy to advance?

While it still would have been awesome to make it to the Sweet Sixteen again, that fact that the Dawgs have defeated number one seed Syracuse against high odds and much skepticism to advance to the Elite Eight for the first time makes the season that much sweeter. (Casual Note: The correct answer was simply "Yes.")

What do you think this run means for the future of Brad Stevens at Butler? Do you think he'll stick around like Mark Few at Gonzaga and build a perennial power or will he jump ship to a place like, say, St. John's?

With a strong team that has nowhere to go but up, Brad Stevens would be crazy to leave Butler for another program.  Having most of the returning lineup and the overwhelming support of the Butler community I don't see him leaving just to rebuild a completely new team in the near future. As long as Butler is paying him competitively with the offers he may be receiving, Stevens should be with the Dawgs for years to come.

In our first encounter you told us about how Butler rewards its students that show up to the games by giving them PoundPoints which can be exchanged for prizes.  How many PoundPoints do you have and have you cashed them in for one of those 3D TVs yet?

I have 49 PoundPoints with a ranking of 62nd out of 1068.  I will be sure to cash them in at the end of the year, whether or not they get me a TV is yet to be seen however.