Share All sharing options for: Down Goes Syracuse - Great Day in Hoya Land 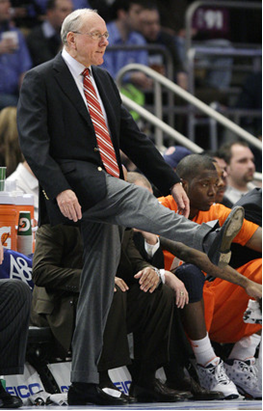 Aw shucks.  I failed to live up to expectations, again

The Syracuse Fruit/Color were upset by the Butler Bulldogs in the regional semifinals.  This marks the 5th time Syracuse has failed to advance past the Sweet Sixteen since 2003, when something unmentionable happened.  This is also the fourth time in their last five tournament appearances that the Orange have been defeated by a lower seeded team.  Some more interesting tidbits from the game.

I could not care less if this looks bad for the Big East.  Just glad to see Syracuse sent home.  Looking forward to the Orange exCUSEs for this flop.