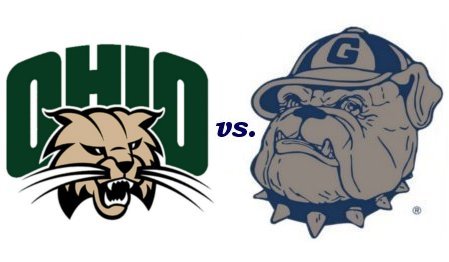 Last week in the Bahamas, I had a fun time…I think… It is all a blur, not because the vacation moved very quickly (although it did), but because rum is cheap in the Caribbean and I could not pass up a good deal. I was upset that I was not able to don the face paint at the Garden and let every player in the Big East know how crappy I think he plays. However, dedicating last Spring Break to watching us suck against St. Johns (seriously?) was not a fun experience. I had to deal with watching the games in the islands, screaming and shouting in the middle of bars and restaurants filled with local Bahamians, who are great people and actually knew who Georgetown was and were fans (probably because of the Global Phenomenon).

As I sit down to write my perspective, I have to say that I have absolutely no knowledge about anyone on Ohio. It is impossible to make fun of them because I didn’t even know they had a basketball team. I hope that we make sure no one finds out who they are by eliminating them from the tournament. Our players are not going to take opponents lightly; they know we have a very difficult bracket. However, the nice thing about the NCAA tournament is that if you go undefeated you are the national champion (yes, this is an attack on the BCS system). One game at a time! Let’s go Hoyas!

OldHoya proudly bought his ticket to Providence and has made the trek up to the land of Dunkin' Donuts. Few things put a smile on his face like the beginning of the NCAA Tournament, particularly with the Hoyas as a high seed. Last year has already been conveniently erased from his memory but OldHoya feels that this is the strongest postseason team in years - and yes, OldHoya knows that he isn't going out on much of a limb saying that.

There's nothing bad about the Italian section of Providence. There's a lot bad about the Big East's pathetic opening round so far.

1st day of the NCAA Tournament is the best day of the year, and it's nice to have the Hoyas back in the mix to wager on. Though the Hoyas got screwed worse than Bret Hart by getting the 3-seed in the brutal Midwest, Ohio doesn't pose much of a threat. Ohio lost by 25 to Pitt and finished 7-9 in the MAC before winning the conference tournament.

Assuming Georgetown plays the brand of hoops it displayed in the Big East Tournament, this one should be in double digits early. 13.5 is a lot of points to give to a team that will likely be heaving 3s throughout the 2nd half, but I think Georgetown wins and covers.