This GameThread was a live blog effort conducted 3 years after the actual Final Four game. After posting this, the Hoyas promptly lost to Ohio in the 1st Round of the 2010 NCAA Tournament and frankly nothing has been the same since. Many fans blame the recent downturn of the program on this failed cathartic exercise. It does, however, contain the greatest comments section in the history of the site. 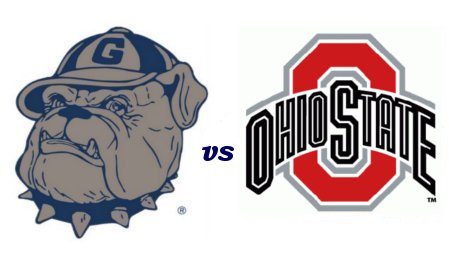 Oh, man.  Final Four, baby!  I'm still riding the wave from the win over UNC and my subsequent march to the White House with a few hundred of my closest friends.  Can it possibly get any better than that!  Nothing can stop us now!  Not even Greg Oden!  Hoya Saxa!

Ohio State again? This is the second time in three years. OldHoya lived in Columbus, Ohio for many years but has been going to Hoya home games and all NCAA Tournament games since 1978. Rest assured, he's not missing the Final Four, particularly with two of the game's premier big men matching up. Let's not kid ourselves, though, this game will turn on star players and for that, OldHoya (like the rest of the free world) looks to Jeff Green. Have you already forgotten what he did against Vanderbilt? Even from his seat in East Rutherford, OldHoya heard the screams pouring out of Nathan's and could smell the bourbon flowing. Get the ball to Green and let's win the game.

UNC was probably the best team in the country and the Hoyas utterly dismantled them in the 2nd half and OT to reach the Final Four.  Vegas is making the Hoyas the favorite here based on that performance.  Ohio State plays a much more deliberate pace than the Heels, and I suspect the Buckeye's zone defense with Oden in the middle will cause the Hoyas some problems.  So long as the refs don't call this one tight however, I expect Roy to show up huge on this stage and prove that he is the best big man in the country.

I'm already spending the winnings here to buy my plane ticket for the rematch against Florida on Monday night.