WWMD - What Would Moses Do?

Share All sharing options for: WWMD - What Would Moses Do? 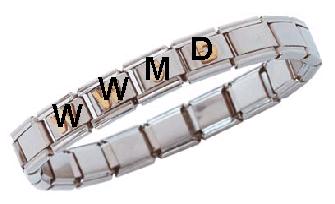 Bracelets for Sale in Red Square (via joeclarke.net)

Why can't our recent recruitments of big men follow normal trajectories?  You know -  meet, greet, wine, dine and sign.  First there was the Latavious Williams saga, an epic tale full of intrigue and indecision, and now there is the Moses Abraham story.

More on Moses After the Jump

What we know so far, from various media accounts including The Washington Post, is that Abraham was supposed to decide last Sunday between Georgetown and Maryland.  Various folks have mentioned that they saw Abraham present at Georgetown's Selection Sunday Soiree, which led most to believe that an Abraham commitment to the Hoyas was imminent.

This led to the obvious rebuttal from bitter Terp fans and the incredibly consistent whining that comes every time a Maryland recruit chooses Georgetown.  The back-peddling cries that Maryland didn't actually want Abraham because Gary Williams backed off and the big man was unable to pass Maryland's strict admissions standards.  The same stringent standards that led to Maryland's remarkable 8% graduation rate, the lowest in the country.  Hoya fans were just about to add Abraham to the list of players that picked/played at Georgetown over Maryland since JT3 took over the helm, a list that includes Jeff Green, Austin Freeman, Henry Sims, and Jason Clark, but indecision struck due to a swift gale from the midwest.

Tom Crean swooped in, like a golden eagle he once represented.  Abraham had received attention from the creme de la creme of the basketball landscape, eliciting calls from representatives of Texas, Kentucky, Florida and UCLA, but still managed to narrow his list down to Georgetown and Maryland.  But Tom Crean somehow caught the ear of Abraham.

Various reports out of the Midwest seem to differ with The Washington Post article, stating that Abraham is actually deciding between Indiana and Georgetown.  They report that Tom Crean made a last minute plea which is warranting serious consideration.  The Indiana website Inside the Hall actually said this morning that the Moses Abraham recruitment is the biggest story in its history as a publication.  They state:

The decision has morphed into Indiana's biggest recruiting storyline in quite a while if traffic to this Web site is any indication. Today, Monday, March 15, 2010 will go down as our most successful yet in terms of eyeballs, if you can believe that.

I guess there is nothing else to cheer for in Indiana right now.  Other than a Jeremiah Rivers haircut.

To put this all in perspective, Moses Abraham would be a excellent signing for Georgetown.  He would complete the already stellar recruiting class of Markel Starks, Nate Lubick and Aaron Bowen.  He is a 6'9'' bruiser with an incredible leaping ability.  And John Thompson Jr. said his blocks reminded him of Patrick Ewing.  He will be a worthy filler for some of Monroe's minutes, should he leave, but he won't replace him.  And he will add some much needed power in the paint.  But we will be fine without him as well.  There are others in the pipeline, including Class of 2011 stud Rakeem Christmas.  Do we want him?  Yes.  Will we be reeling without him?  No.  Are we a better fit for his skill set than Indiana? Absolutely.

There is no timetable for Abraham's decision.  It could come today, tomorrow or next month.  From a recruiting standpoint, the contact period (when coaches can conduct off-campus evaluations) starts today and ends next Monday, the 22nd.  You can be sure that Crean is already sitting at Abraham's kitchen table, exalting Bloomington, Indiana and his and the program's history of shaping big men into legitimate NBA prospects...yeah...

Here is hoping that Moses sticks to tradition and the program that has had four players 6'7'' and above drafted in the past three years.  The same program has had three NBA centers with one name recognition and is consistently referred to as Big Man U.  But high school kids are wacky, and there is no telling what will happen next.