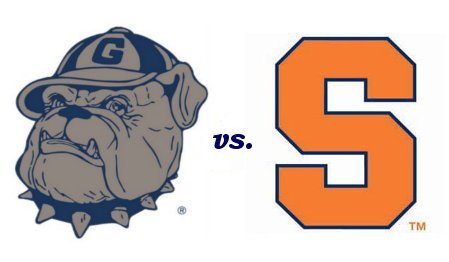 Last time we lost three in a season to Syracuse some dude named Esherick was coach and I was still in diapers. The team played well yesterday in spite of the efforts of the refs to throw the game; even the waiters serving me pina coladas agreed that something smelled like rotten fish tacos at MSG. Squash the Orange. Hoya Saxa.

OldHoya is feeling good enough about this game that he sent HoyaSonOne up to watch at MSG. The reason for optimism: Gtown is playing with house money and the Hoyas have played pretty well over the past 2 games, particularly as the big men battled with Cincy.

As loyal readers know, OldHoya's new digs include a 103 inch HD television. Some say that tourney time leads to lower productivity - OldHoya questions the manhood of anyone who claims that watching the Hoyas dominate the Orange is anything other than productive.

The opening line above has now moved to Cuse -6 with an o/u 139. I'll play the current 6 point line here since that's what you'll be getting in at if you wager this morning.

One of the things you always hear in sports is how difficult it is to beat a team three times. This is based on the premise that by the 3rd go-around, the team that had lost the prior two times will figure something out and that the team that had won the previous two times won't be able to match the tenacity it brought in the first two matchups.