Well, that was easier than expected.  A relatively relaxing 20 point win against Dominique Jones and the South Florida Bulls was kind of nice given the explosion that lies ahead tomorrow.  We here at THE GLOBAL PHENOMENON have a lot of work to do to satiate the appetites of our loyal readers before the monstrous 3rd matchup with the Orange, but before we turn the page on USF we're handing out some awards to those most deserving. 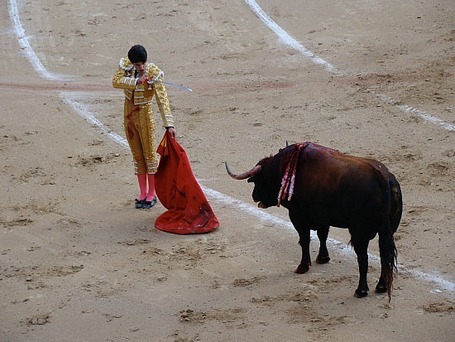 We've had enough of the Bulls.

Chris Wright Heart of a Champion Award:
Chris Wright.  Put simply, Georgetown loses this game without Wright.  Offensive production aside, his floor leadership with Austin Freeman off of his game and Monroe and Vaughn on the bench with foul trouble was invaluable.  CW finished with 15 points, 6 rebounds, 4 assists, and ZERO TURNOVERS.  A remarkable performance from our beloved Wrecking Ball.  Well done, sir.

Scottie Reynolds Award:
Dominique Jones.  If there was one guy in the entire Conference who you would want on your playground team, wouldn't it be Jones?  This guy scares the crap out of me whenever we play USF, and I'm just gald we were able to survive his latest onslaught and move on.  I'm already looking forward to my Knicks 'Jones' jersey next season.

The Tim Donaghy Award:
All the refs. Good God they were atrocious. They were inconsistent, dumb, and fat.  Referees in the Big East have caught a lot of flack this year, and it doesn't seem to be getting any better.  I'm usually not one to criticize officiating because they generally do a thankless job that is nearly impossible to always get right, but this game had some very questionable whistles.  The 4th foul on Monroe was one of the worst calls I have ever seen, as were the 5th on Vaughn, 4th on Thompson, 4th on Wright, etc..

The Corey Haim Award for Most Entertaining In-Game Comment:
It wouldn't be appropriate to honor the memory of the late great Corey Haim by singling out just one of you to earn this award.  Instead, we're giving it to each and every one of you who nearly shut down SBNation's servers by contributing a whopping 500+ comments during the game.  I'm sure your bosses are thrilled.

A Few Good Men Award:
The GLOBAL PHENOMENON staff. We have collectively decided that potential dismissal from our jobs be damned, we're bringing you content fast and hard for as long as the Hoyas play. Please do come join the fun. 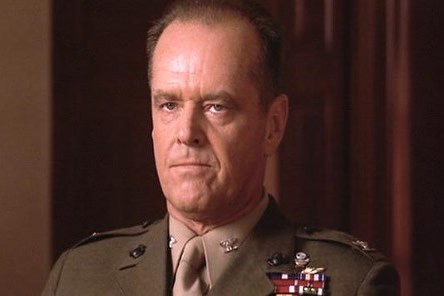 Fundamentals Award:
Despite all the fouls that were called against the Hoyas, Georgetown was saved by USF's atrocious free throw shooting.  USF finished 16-25 from the charity stripe for a 65% margin.  If they had made ALL of their free throws, oh, they still would have lost 69-58.  Nevermind.  USF sucks.  Thanks, guys!

Can't Play Like This Tomorrow Award:
Julian Vaughn. 6 points, 2 rebounds and 5 fouls.  Yes, some of the calls were horrendous, but Vaughn needs to stick around on the court more against the Orange.

Craig Esherick Award:
I'm still not sure why Georgetown played more than a single possession in man-to-man defense.  If they can't shoot, play zone!  Do I need to send JT3 all the tapes from my Syracuse Collection?  Also, at some point JT3 needs to stand up to the officials for his players and get T'd up.  I'm not suggesting he should have, but it would be nice to see for once, especially with the zebras acting so absurdly in this one.

The Phillips/Magnavox Award for Having No Idea What is Going On:
To whomever watched the game on a television this small: 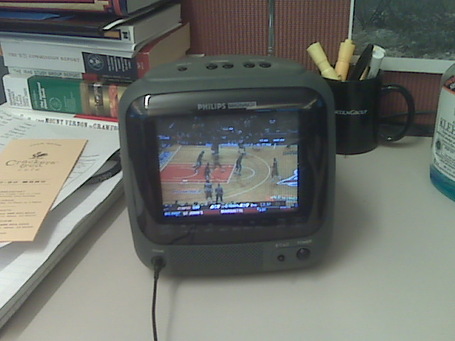 Is that Henry Sims?  Greg Monroe?  Wait, am I watching the right game?  What is the score?  That looks like a 6.  Or an 8.  Dammit.  This sucks.  Good thing Doris Burke is coming through LOUD AND CLEAR on my headphones. 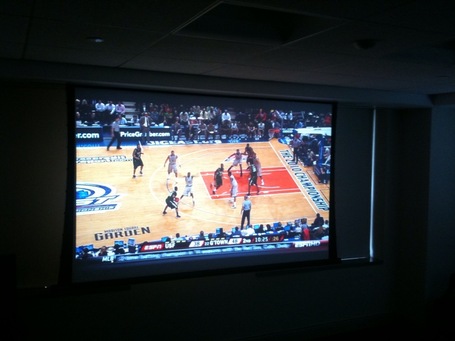 Move into a new office? Why not get an 108 inch HD projection set to watch games? OldHoya the best.

Robert Horry Award for Stepping Up in Big Moments:
Jason Clark. Go go gadget hit big three after big three for the Hoyas today, snapping out of a late season funk that made me very unhappy with him. He played well against Butler in MSG earlier this year, hopefully this trend continues.

Tracy McGrady Never Getting Past the 1st Round Award for Weird Statistic:
Austin Freeman has never scored in double digits in the Big East Tournament. That strikes me as odd. At the same time, he was the 4th or 5th scoring option as a freshman, last year didn't happen, and we've only played one game thus far this year. Something tells me Austin will break that streak tomorrow.

Amare Stoudemire Big Man Camp Award:
Greg Monroe. How about his footwork today? Somebody looks to have won most improved camper at Amare's skill camp, right? How many more rhetorical questions can I ask? Plenty? Is this thing on?

Revenge is a Dish Best Served At Madison Square Garden Award:
The Georgetown Hoyas.  Eat it, South Florida.  Have fun in the NIT. 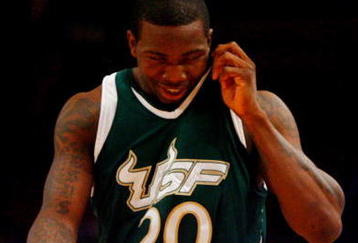 Y'all came to see Dominique Jones go home.  via cdn.bleacherreport.com