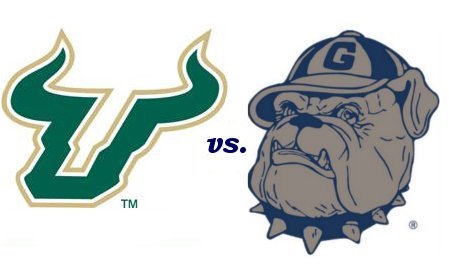 I traveled to the Big East Tournament last year, waste of a Spring Break, unless your definition of an awesome vacation is watching your chances of post-season glory bounce off the side of the backboard. So now I have decided to watch the BET from the satellite-equipped cabana outside my awesome hotel in the Bahamas.

To say I want revenge on the Bulls is an understatement. Not only did they embarrass us at home, right after our victory against Duke, but the vision of that empty student section will haunt me forever. And then Dominque Jones had the audacity to taunt us. No, I did not come to see him play, and I shall not be sipping on casual pina coladas during the game for his sake. They are to help me drown out the shrieks of the nearby sorority girls from [insert school not named Georgetown] as they marvel over their tans, the same tans that eight hours from now will make me so glad I am not in New York. As a wise man who writes this blog once told me, you're only in college once. Hoya Saxa, beat the Bulls.

Not a lot to like about this USF squad after the beatdown they threw on the Hoyas last time around. From the beginning, that was one of the worst performances the Hoyas have had this year.

This new "everyone plays" series for the Big East Tournament prevents most people from making it to the game - and OldHoya is disappointed that he won't make the trip this year. To prevent any sort of jinx, OldHoya will sandbag all memories of the finals and other games until we see how this year's team acclimates - suffice it to say that last year was not a happy memory, summed up well with Greg Monroe's "tweet" yesterday: "i know exactly how the players from UConn feel....that was us a year ago...." (OldHoya might not be the most tech savvy but his henchmen point him in the right direction - what the hell is a Twitter anyway?)

Back to USF - OldHoya acknowledges that Mrs. OldHoya is filled with more vitriol than he is but he has one wish for how this game opens as he'd like someone to pin Dominique Jones's first shot against the backboard. OldHoya's restrained himself over the course of the season but he hates that MF and did not come to seem him play.

This line is scary scary scary. I'm going to take the Hoyas -6.5 here because I think (read: HOPE) JT3 will have them focused enough not to overlook these guys again ahead of a potential war with Cuse on Thursday. USF played extremely sloppy against DePaul, and if it turns the ball over against Georgetown like that the Hoyas shouldn't have a problem stabbing the Bulls in the heart with spears. That being said, Dominique Jones sacres the bejesus out of me. That's right, BEJESUS.