Share All sharing options for: Beers With Bobby: An Evening with West Virginia Coach Bob Huggins

You are probably used to the Sleeping with the Enemy feature that is published right before games; a segment that sheds insight into Georgetown's opponents and the traditions of rival fans.  Unfortunately, Smoking Musket unnamed West Virginia blog decided not to partake in our fun, calling us "yet another rakish Georgetown prick with very little sense of humor."  To be honest, while we weren't expecting much from the Mountaineer faithful, we are slightly disappointed they could not answer simple questions like who they dislike more - Rich Rodriquez or John Beilein, or even comment on the unruly reputation West Virginia fans have developed over the past few seasons.  They obviously did not realize that the questions are an opportunity to respond to stereotypes about the school and that we are throwing them a softball to defend themselves while attack Georgetown at the same time.  West Virginia fans not understanding what everyone else finds fairly straightforward - who would have thought?!?  Oh well, can't win them all. 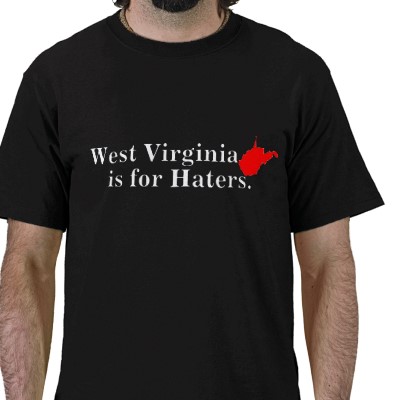 So instead, we present to you this story, full of excitement, intrigue, passionate love affairs and unbridled enthusiasm.

We here at the Global Phenomenon pride ourselves on our generally delusional theories on Georgetown basketball and place a premium on drinking and general debauchery. Sadly, this tale only involves the latter but its central character is none other than Bob Huggins. 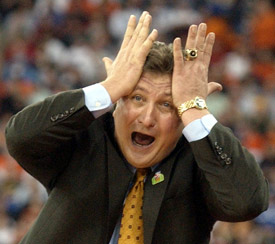 Back in the good old days, before bringing in the cast of characters currently running Morgantown, Coach Huggins led a crazed group out at Cincinnati. Never one to shy from controversy, they'd even made it into Sports Illustrated with questions of whether the program had become UNLV East. Huggins lived for yelling at his players and thrived on transfers and jucos - guys who had no other place to turn and would simply ball out for him.

Lucky for me, Huggins was heavily recruiting a juco player who played for a friend of mine at Tallahassee Community College - Antwan Jones (TCC was one of the top jucos in the country for a good 10 years and sent both Marcus Hatten and Bootsy Thornton up to St. John's). EVERYONE was in on Antwan who was built similarly to Devin Ebanks and could really shoot the hell out of the ball, so the juco coaches in Florida set up a tournament where he could play with a few other big time recruits and let everyone get an eye on him. Several high profile but ethically challenged programs, like LSU, were there and after Jones put on quite a show.

Of course, that was completely secondary to the show Huggins would put on that night back in Tallahassee. I was just out of college (completing my horrific "playing" career by blowing out my ACL), and hadn't been on the other side of the table for recruiting tales. There's no one better to learn the ropes with than Huggins, who told some incredible stories and didn't shy away from any questions.

We made it to the restaurant with a couple other coaches' wives but they were sent home, leaving 3 coaches and me around the table. Then the beers began flowing. Each time the waitress brought a pitcher to the table, Huggins ordered another and as we filled the glasses, he'd repeat, "My players play hard; I coach hard; and when I drink, I drink hard." Legendary.

After a few rounds, Huggins was willing to tell some of his recent recruiting stories and started in on Duke's then new assistant, Wojo. On the trail, Huggins made clear that he doesn't take anything to the gym with him because he has one decision to make: can the best player in the gym play on his team. Sadly, Wojo had a notebook with him the first day and Huggins began riding him mercilessly. This carried over into the night when Huggins and Wojo shotgunning beers out of a shoe before Wojo got so drunk that he shotgunned a beer straight into his ear. As the sun was coming up over the hotel, Huggins left Wojo, who was terrified that if he went to bed, he'd oversleep and miss K - his solution was to do defensive slides around the outside of the hotel until it was showtime. Suffice it to say, any activity leading to Wojo doing drunken slides around a hotel is a winner in my book. 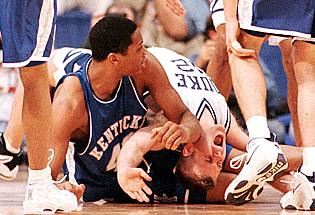 Without question, the most profanity laden story was when Bob Knight misconstrued something that Huggins had said in an interview. The two had never met but one day, Knight calls Huggins office and upon answering, Huggins hears, "Is this the mother*cker who said ___." Huggins responded with "Who the f*ck is this?" The two scream at the top of their lungs, repeatedly calling each other sanctimonious pricks until Knight finally snaps and tells Huggins that he had never met him but thinks he does a pretty f*cking good job and coaches the f*ck out of his players. The two continued shouting at each other before hanging up with a few good natured f*ck yous. Apparently they actually established a bond that day.

After a bunch of stories, I started asking Huggins about his coaching style. Interestingly, he answered everything. That year, several of his players had yelled back at him during games and people really questioned his ability. He was refreshingly honest and said that sometime's he's wrong and if so, he wants his players to let him know - it's clear that they know who the boss of the program is but they're entitled to their say. The big question, of course, is whether he's a cheater - and to this day, I don't know - but his response was somewhat glib in that the NCAA had never been able to pin anything on him. Of course, this overlooked the fact that his assistant coaches often take the fall for him.

His phone (one of those silly Nokia models that everyone used to have but with a Cincinnati faceplate) was ringing the entire night and ultimately, there was someplace he had to go. The next morning marked one of the finer hangovers I've ever had but it left some great stories. Huggins is a complicated character and this was before the DUI, so his guard was likely down, but he's one of the best drinking partners out there.