The Casual Awards: Hoyas Show No Fight Against Irish

Share All sharing options for: The Casual Awards: Hoyas Show No Fight Against Irish

After a maddening month of February in which we attempted to convince ourselves that Georgetown is one of the best teams in the country, we now know as we flip the calendar to the defining month of March just what kind of team we have. This may come as a newsflash to some of the more delusional fans out there, but the harsh reality is that this is not a very good team. Do the Hoyas have some good players that if they get hot can carry Georgetown to victory? Yes. Is this a team that can consistently be counted on the be a tough out for its opponent? No. Healthy Freeman or not, the Hoyas sucked against Notre Dame. Here are your damn Awards: 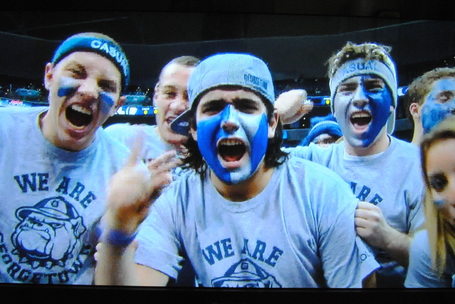 "Stay Classy Cuse" Award for Best Fans from an Opposing Team:
Notre Dame Fans. After the drunken louts of Villanova and Syracuse, Notre Dame fans were a breath of fresh air. They sat in the 400 section, where the belong, chanted politely as their team EVISCERATED us and then behaved with dignity and class during post-game cocktails. Having personally spoken to a handful of Notre Dame fans at Clydes and The Channel on Saturday, I have to say I found them pleasant and not terribly unattractive. Even the guy in the Leprechaun suit at The Channel carried himself with grace and aplomb. I hope we lose to them again in the Big East Tournament. It would be a pleasure.
Oregon Ducks Awful Jersey Award:
The Georgetown Hoyas' silver jerseys. Those things were atrocious, it looked like we were giant condom wrappers the entire game, which was appropriate considering what Notre Dame was doing to us on the floor.

I tried to to you people.

Georgetown Sucks Award for Georgetown Sucking:
Georgetown. Lack of inspiration, lack of motivation, lack of everything good. This game was absolutely pathetic and I hate writing these damn awards because they remind me how pathetic that game was and how pathetic it is that the play of a bunch of 20 year olds can affect my mood so much. And now my mom is yelling at me because the Double-Stuffed Oreos I have been pounding all day while watching re-runs of CSI Miami will ruin my appetite for dinner. 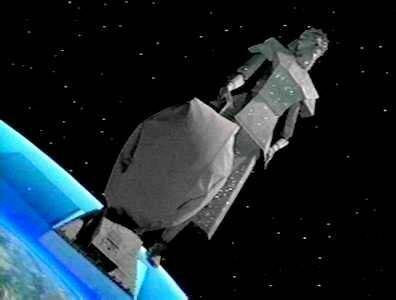 The Hoyas have gone from suck to blow. via blog.foolsmountain.com

Nicolas Cage Hallelujah Award:
Chris Wright scored 10 points. We lost. Hopefully we will never have to hear about the Chris Wright Theory ever again. Looks like announcers will have to go back to talking about how John Thompson III is John Thompson Jr.'s son and how he has always been John Thompson's son and he is ok with that. I haven't heard that story in a week, longest period since Thompson the Third was hired.

Worst Weekend Ever Award:
Cuse has a shot at being ranked #1 today after destroying Villanova. Georgetown lost to a team that lost to Loyola-Marymount, who lost to Wyoming, who has an impressive RPI of 218. Hoya Saxa!

The Anti-Michael Jordan Award:
Austin Freeman. We all remember Jordan's amazing flu game against the Jazz in 1997. Think back to how incredible that was, Pippen basically carrying MJ off the floor, completely spent from putting all he had on the court to will his team to victory. Well Austin was the exact opposite Saturday. I understand that he wanted to play, but if he's going to play, don't sulk like a child and chuck up airballs the whole time.

Hair Cuttery Award for Worst Hair Decision in Division I Sports:
Greivis Vasquez. I awoke from my post-game stupor sometime around 9pm to catch overtime of the Virginia Tech - Maryland game. What the hell is wrong with that kid? He had some kind of little Mohawk going on which was a national embarrassment. Of course, Maryland won. Maybe Henry Sims needs to think about getting an Afro.

NBC's Biggest Loser Award:
Chris Wright. Not a loser because he lost a lot of weight, but because he's a loser. Not a loser because he spends his free time writing for a Georgetown basketball blog like we do, but because he's a loser. He sat out most of his freshman year and came back right in time for the Big East Tournament, where we lost to Pitt and then flamed out in the 2nd round of the NCAA Tournament against Davidson. Then he fought Jessie Sapp, the captain of the team, submarining last season. Then he played basketball with the consistency of a poop after a Chipotle burrito this season, and he will be the reason we flame out in the first or second round.

Charlie Weis Award:
John Thompson III. Its starting to become apparent that Thompson is sort of a Weis clone. He, like Weis, won with another coach's recruits, locked himself into a long contract, and is too damn stubborn and arrogant to change his ways. Look I'm all for rah rah Esherick sucked, look at us now crap, but the reality is his resume for these past 3 years will likely read: 2nd round, NIT, 1st round in the last three seasons - not good, no matter how you slice it.

Tony Danza Who's The Boss Award:
Greg Monroe and Chris Wright. Apparently these two were jawing at each other the entire game on Saturday. What's infuriating about this team is that we have a midget point guard who believes he's the man, and the most skilled big man in the country that doesn't know how to take a game over. THERE WAS NO LUKE HARANGODY AND MONROE GOT LESS THAN 10 SHOTS. He should have had 30 points and 15 rebounds. Ugh.

The "Don't You Have Something Better To Do?" Award for Strangely Being at The Channel:
Terry McAuliffe. God I hate DC. I am pretty sure I saw this Democratic Party Superman at The Channel after the game. Seriously? The Channel? Shouldn't you be at The Palm? I also hate myself for recognizing him and coming up with that joke.

Craig Esherick Bonehead Coaching Award:
JT3. Why the hell was Freeman playing? After that first airball he should have left the game, went to the locker room, puked and tweeted. That's it. Not sure if Thompson is developing glaucoma, but Vee Sanford is pretty damn good. Good things happen when he's on the floor and he should have taken Freeman's minutes yesterday.

The Vince Lombardi Genius DAY-AFTER Coaching Award:
JT3. At least he knew he was wrong.

"If I had to do it all over again, would you not play Austin? Absolutely. That's easy to say now."

Dolly the Sheep Clone Award:
To Luke Harangody's mutant clone, whatever his name is. How did they find two people so similarly ugly? Is there some sort of mongoloid farm in bumblefck Indiana that produces these cross-eyed, pudgy-faced idiots? Also, did this farm produce Kevin's older brother Buzz in Home Alone? I need answers.

Anti-Carrier Dome Award:
The Verizon Center. We've written a lot about this, and frankly, there will be a lot more coming. For now, just know that Syracuse's fanbase - while lacking in intelligence, looks, and employment - is far superior in cheering their team on. Facts are facts.

Pedro Cerrano Award for Having No Marbles:
The Georgetown Hoyas. What a pathetic display of hustle shown by our boys yesterday. We gave up like 15 offensive rebounds and got thoroughly outworked by a bunch of 6'4" dudes. If that doesn't stink of the 2008-2009 variation of this team, I don't know what does.

Sticks and Stones May Break My Bones but Words Will Never Hurt Me:
Henry Sims. He said on his formspring that he hated the PHENOMENON. That's fine and dandy, but Hank, you're currently the 4th man on an three man bench that consists of three freshmen. Two of those freshmen were signed in May of last year. Get in the gym, learn how to throw a chest pass and stop reading the blog. Just kidding, we think it's awesome you read the blog. But please do get in the gym.

The False Prophet Award for Toying With Forces More Powerful Than You Can Imagine:
Sleepyhoya. We here at the GLOBAL PHENOMENON were truly moved and inspired by sleepyhoya's morning-of post that GOD HIMSELF was going to ensure a victory by the Hoyas over the Fighting Irish. By including death-bed grandmas, the Pope, the magic of satellite radio and Bruce Springsteen (a man beloved by approximately 60 percent of this blog's senior staff), sleepyhoya's prediction had the feel of divine guarantee. WELL WE ALL KNOW HOW THAT WORKED OUT! Sleepyhoya's hubris and false prophecy has clearly been noted by The Lord and we here at the GLOBAL PHENOMENON are now pretty sure God's plan for The Hoyas is the following: CRUSHING DEFEAT FOR ALL ETERNITY.

Only a swarm of bees can save us now. 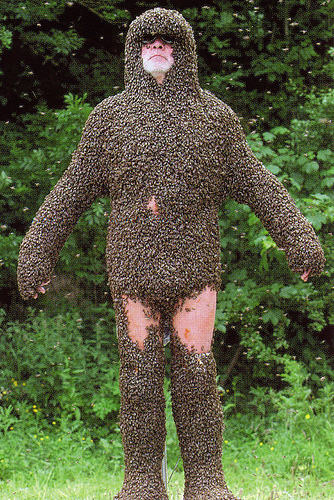 
The Well That Was Fun While It Lasted Award:
The 2009-2010 Georgetown Hoyas. We're done, finished, cooked, however you want to say it. Yesterday was the game I finally realized this season will not be special. I'm sure plenty of you came to this conclusion earlier, but I tend to be on the delusional side rather than the cynical. The team is too inconsistent, has too little passion, and the lack of a bench has finally caught up with us. Vaughn is banged up, Wright plays every other game terribly, Monroe isn't mentally tough enough, and we can't expect Freeman to shoot 95 percent from the field every game. I've had these moments of realization at varying times the past two seasons - in 2008 it was during the Pitt BET Final when I realized we weren't athletic enough to do any damage in the tourney and in 2009 it was when we got annihilated by West Virginia at home. We will not make it to the second weekend of March. You know it, I know it, and Bob Dole knows it.

Ellis Boyd 'Red' Redding Hope Award:
Remarkably, Georgetown can still play its way into a double bye despite being in sole possession of 7th place right now. Figure out the math yourself, it involves us winning out and a meteor hitting Louisville, Milwaukee and Morgantown. The chances of a meteor shower are higher than Georgetown winning two straight. 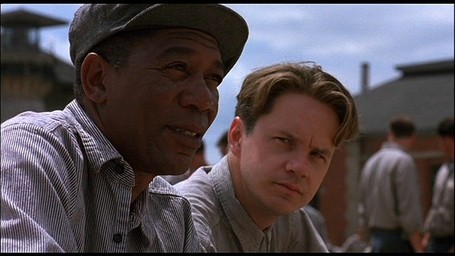 Hope is a dangerous thing. Drive a man insane. via growabrain.typepad.com