Sleeping With The Enemy: The Providence Friars

Share All sharing options for: Sleeping With The Enemy: The Providence Friars

We here at THE GLOBAL PHENOMENON have not made our affection for Katy Perry a secret.  It should come as no surprise then, that given Casual Hoya's clear influence over the team's performance on the court, that the Jekyll & Hyde Hoyas seem to embody some of her lyrics:

So after the thrilling win against Duke, the stink bomb against USF, and the rousing win over Villanova propelled by a rabid student body demanding headbands, the Hoya faithful are reasonably worried about the team will come out and handle what is at best a mediocre Providence Frairs team.  As usual, we're bringing you behind enemy lines to tell you everything you need to know about our next opponent.  Special thanks to our friends at The Friar Blog for providing answers to our penetrating questions.  When you're done reading his answers, check out this link for our answers to some of their questions.  Friar Blog, this Coors Light is for you.

'Sleeping with Providence' after The Jump:

CH:  How great is The Dunk? Not the arena itself, just being able to call something The Dunk. The best we can do is The Phone Booth. Which is pathetic. 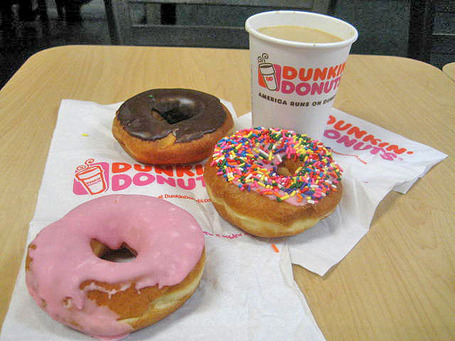 Providence runs on Dunkin'  via blogs.creativeloafing.com

Oh, it's awesome. Plus, being an absolute Dunkin' Donuts crack like-addict (if I don't have any French Vanilla by noon, I turn into a raging lunatic) I don't even mind the full name. I mean, The Dunkin' Donuts Center!? Most donuts don't even have centers! Except for gross jelly donuts and those delicious Boston Cremes. Boston sucks though. Have you tried their new triple chocolate donuts or muffins? They just came out last week, and are the perfect morning comfort food after a tough loss from the night before (you can imagine how healthy I am after the way things have gone this season). Anyways, it may seem like I work for D&D, but I just love them -- or I have been brainwashed over the years.

What can the Hoyas expect from this years Friar's squad? Who are the best scorers? Rebounders?

Providence is going to push the pace, shoot a bunch of threes, not turn over the ball, and get a great amount of second chance opportunities. The main weakness as everyone knows, is defense. Transitional, dribble-drive penetration, wide open three point looks, you name it. After the meltdown against USF in which Keno called everyone out, it looked like things were on the up and up after clamping down and beating UCONN. Well, apparently they suck regardless.

Jamine "Greedy" Peterson has been getting a lot of attention throughout the league, averaging a double-double (and getting 13 overall this season). What can you expect from him? At LEAST one highlight film dunk (he's been on SporsCenter's Top Plays three times this year already), to go along with a few dumb three-pointers. He's been slightly more selective as the season progresses, but he is capable of hitting a few bombs if he's feeling it. When he's on the court, Greedy will take a majority of the shots (believe it or not, that nickname was give before he played basketball as a child!). If anyone else shoots and misses, well, Peterson will be there for lots of offensive rebounds -- he's first in the BIG EAST. Friar fans have been pleasantly surprised by his rapid improvement as a redshirt sophomore.

Providence has a few other players capable of putting up some nice offensive numbers, but 5th year senior Sharaud Curry has been the most consistent in conference play. He'll get his points by way of the three ball mostly, as I don't see him being able to dribble-drive for his floaters with Greg Monroe lurking down low.

The most amazing thing that has happened in Providence Friar hoops in the past 10 years is when Jeff Xavier's brother PERSONALLY AND SINGLE-HANDEDLY stormed the court in the middle of the Marquette game last year: True of False?

I think the fact that Jonathan Xavier was in a cool furry parka made the single-storm move even more amazing. But, as epic as that event was last year, that does not compare to what happened in a game against UCONN at the DUNK earlier in the decade. During a foul shot in '03, someone from the crowd threw a dildo out on the court. It's a damn shame Youtube and DVRs weren't more prevelant at that time. The way the newspaper described it the next day was also pretty comical -- they said play was stopped when someone threw a "marital device" onto the court. I didn't know you had to be married to use one of those?

Can Providence ever get back to being truly competitive in Big East Basketball? What do you think needs to happen in order for the Friars to be a contender?

We sure can. Keno is slowly ramping up the recruiting -- first part of developing the program is obviously getting better players. Next year, we have two Top-100 recruits coming in, which is big for us believe it or not. In the upcoming classes, Coach Davis and his staff have been hard at work trying to reel in some of the top talent of the area. The prep scene especially has been booming in New England, and the staff has been in on the action early. Getting the top players to commit is obviously going to be a challenge, but I think it's going to snowball over the next few years. "First we get the jobs, then we get the khakis, then we get the chicks"

When Tim Welsh left did you buy an expanded Cable sports package so you could watch him and his hair flub color commentary for the fourth-tier Big East game of the week? And looking forward, does Keno Davis really have what it takes to make the Friars a perennial contender in the Big East? Really? Come on!

I don't know if you have caught any of Timmy's telecasts on the BIG EAST network, but he's actually really good. When PC had our big win over #1 Pitt last season, he did the halftime and post game show -- you could just see how proud he was talking about the kids who he mostly recruited. He's a good guy and knows basketball, who just had a few unfortunate breaks along the way. Timmy had some good seasons that just didn't end well, and by the end didn't surround himself with the best people to take the program where it needed to go. Does Keno Davis have what it takes? He's a young coach who is also still learning, but I think YES. You watch!

DMac had a nice shot at times (he once tied the record for most threes made without missing, 9, which has been broken since I think), but he suffered through some terrible slumps that drove us Friar fans nuts. Oh, and um law-abiding? Yeah, in 2004 McGrath pleaded no contest and agreed to anger management counseling after his girlfriend of 4 years accused him of throwing her on a bed and choking her. So I guess that makes him just a rich Eric Devendorf? Anyways, the incident led to an often quoted phrase that Donnie told the security guard that came to the room after hearing a girl crying. "Be cool, you know me". Not cool, DMac, not cool.

Man, Rick Pitino. Whatever happened to that guy after taking the Friars to the Final Four? He totally should have stuck around in Providence.

If he did, I DEFINITELY would not have an answer to the next question. Sleeping on a used college-dorm mattress is one thing...

What is your favorite restaurant on Federal Hill? Bob & Timmy's? Also, when were you last at "Legs and Eggs" at The Foxy Lady?

This may seem sacrilegious, but I think I can count my visits to Federal Hill on one hand. I've only lived in Providence for the 4 years I went to school there, so the only time it made economic sense to go there was Parents Weekends. Where did I wine and dine my future wife? Well, Dunkin' Donuts of course! That being said, I really enjoyed Cassarino's and Angelos the few times I was there. No idea how I never made it to the Foxy in my time there. Maybe because I was afraid of running into Mo Vaughn and other hated Red Sox? Ah, who am I kidding. I hereby give back my man-card. I don't deserve it.

If you were forced to save one life - Austin Croshere or Ryan Gomes - who are you picking and why?

I didn't start following PC Basketball until the fall of '98 as a puny little freshman, so I don't have any real affinity for Austin Croshere (even though he was a big part of the last great team that our school had, to go along with being a solid NBAer). Ryan Gomes? I had a huge basketball crush on the guy, and rightfully so. Since I went to school at PC, he was the only All-American to come by, and is currently the only former Providence Friar playing in the NBA right now. Plus, he's just a good dude. Now if God Shammgod (who also played two season before I came) enters the equation, that's a tough one. The guy had a sick handle to go along with his epic name. Plus, if I saved his life I could be handsomely rewarded, since his whereabouts have been unknown for a few years.

Marion Barry does not, as far as we know, come to Georgetown games. Does Providence's also formerly imprisoned mayor Buddy Cianci, ever come check out the Friars?

Man, haven't heard that name in awhile. I found out thanks to the good people at Wikipedia that he 1) Now lives in a posh condo that is adjacent to the Providence Place Mall (which is right down the street from THE DUNK, so he better effing go to games to support the team!) and 2) He got rid of his hair piece after getting out of prison and now looks like this.

How do you see the game playing out? Final score prediction?

The Friars are in the heart of a brutal six game schedule, which they will be hard pressed to get just one win out of. They missed out on a good chance on Saturday against Marquette, so I think they will come out strong to rebound. The Friars play better at home like everyone else in the conference, but I just don't see an answer for Monroe if Bilal Dixon doesn't have the defensive game of his life. I think our shooters can keep it close, but Georgetown pulls it out the last 8 minutes for a 7 point victory, 82-75.