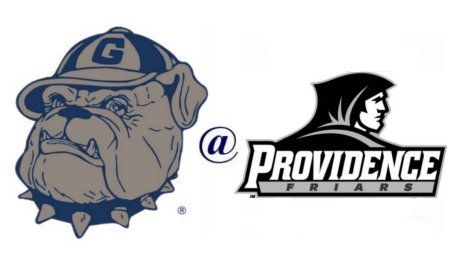 Revenge is best served cold by Austin Freeman, and he and Jason Clark dished it out to Villanova. I think my favorite part of the game however was before tip-off, watching Henry Sims go up into the student section and go crazy with the fans.

Also, if anyone doesn’t know, Georgetown has closed the university these past two days, and I am loving it. For those students that do not go to their classes anyway, this changes nothing, but I now have had two days of freedom with possibly more (crossing my fingers) on the way. Thank you DC plowmen for packing down the snow covering the roads into solid blocks of ice that will be there until April. Campus roads are pretty snow free, but take two steps out of the front gate and you can see DC’s snow preparedness, or lack thereof.

Providence, huh? Well, they're an original member of the Big East and a Catholic institution (though run by the Franciscans). Otherwise, as we all know, Coach Thompson II dominated hoops up there, leaving as one of Providence's all time bests, before heading to the Celtics to back up Bill Russell for a few years.

But let's live in the recent past for a few moments - how about that Villanova game? Incredible team performance dominated by assists and a great coming out resurgence by Jason Clark. Now let's focus on the awful: Jay Wright. Is there anyone who likes this guy? OldHoya overheard this coaching phenom say to the refs, "We're the number 2 team in the country, how about some respect?" Respect comes with dignity and OldHoya knows for a fact that there is no dignity in a coach whining to the refs.

What? The juggernaut Hoyas are only giving 4.5 to Providence? How does that make any sense?

Though Georgetown is 0-4 ATS in games after which they score 80 points or more, Providence is 2-7 ATS in all home games in which there has been a line and 0-2 ATS so far in February.

If Georgetown does not win AND cover the spread in this game, then I really have no grasp on this team (though my record ATS indicates otherwise). The pick is Georgetown -4.5 and I think the Hoyas will put up a decent amount of points on the board against a team that has trouble guarding the perimeter, has trouble guarding big men, and has trouble doing anything. Final score Hoyas 83 - Friars 71.

The Hoyas are currently 10-8 ATS (that's 'Against The Spread' for those just tuning in).