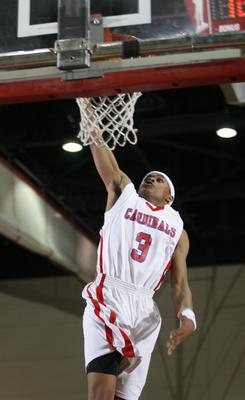 John Thompson The Third and the Georgetown staff have extended a scholarship offer to Tyrone Johnson, a 6'2'' guard out of Plainfield High in New Jersey.  Johnson is currently ranked as a top 50 recruit in the class of 2011 according to Rivals.

Johnson completely controlled the tempo of the game, using his size and strength to hold off opposing pressure and always staying under control while running the team. He picked his attack spots well within the offense, making great decisions off the ball screen, elevating for mid-range pull-ups with a soft touch, showing good footwork and explosion with his rip-through moves, and creating for himself and others off the dribble.

"Head Coach JT3 called me up and officially offered me. I am pretty excited. They (Georgetown coaches) have been recruiting me since i was a freshman so i have been waiting for this for a while. Coach Thompson keeps it simple. He asked me how i was doing, how was school going, how were my grades. We also talked about the success the basketball team has been having this season and the ups and downs a team goes through during the season."

Seems like a great fit with the offense, hopefully Calipari doesn't leave bags of money outside Johnson's home.