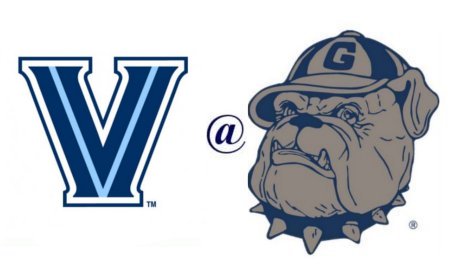 Well, that sucked, a lot. Students sucked for not coming out, but we lost that game on the court by giving them the win. However, harping on losses is so 2008-2009. I am looking forward to winning against Scottie and his posse.

For all of the shit that I am receiving from Villanova fans saying that they are no longer worried about this game, they should be. Our players are pissed. The good thing is, unless roofs are collapsing, I think that the turnout should be better for this game than South Florida. This game will go a long way to determining our season, and though students do not care enough to go to all Big East games, they are aware that this is an important one.

OldHoya made the mistake of trekking to Philadelphia to take in the Nova loss and will obviously be front and center for this game. As the loyal readers know, Nova boasts OldHoya's least favorite fans and he takes particular pleasure in beating them.

Last game was rough on the vocal cords as OldHoya was on his feet for half the game. There's no way that the Big East assigns that clown Cahill to GTown again, is there?

This snow won't help anything, but OldHoya is making the trek from his Georgetown home and expects nothing less from the student section.

Factors that the wiseguys in Vegas have clearly considered here in making the Hoyas the chalk:

1) The last time Georgetown played in a big game like this was just one week ago when they pasted Duke ay Verizon as a 1 point dog.

2) The loss to USF was a blip that will actually ensure the Hoyas play better against Nova.

Factors that the wiseguys do not know but we here at THE GLOBAL PHENOMENON do:

The pick is Georgetown -1.5. Wait...what! You're taking the Hoyas in spite of those two awful omens? Why wouldn't you take the points and #2 team in the nation in front of what might be a non-existent crowd at Verizon during the snowstorm from hell?

2) The way Georgetown played against Nova in the 2nd half of the prior game was pretty encouraging.

The Hoyas are currently 9-8 ATS (that's 'Against The Spread' for those just tuning in).