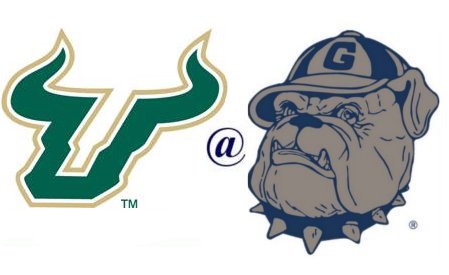 The Verizon Center is where amazing happens. The staff not letting me bring in face paint (because small tubes of blue and gray paint at a Georgetown basketball are clearly a security threat) was a bit ridiculous, but standing 30 feet from the president was pretty cool. Hollis must have thought so too because of the obvious double-take he did when he realized the president was right behind him.

Standing out in the cold for over ten hours before game-time definitely gave me hypothermia and a cold for the next couple of days. I also got body paint on every article of clothing that I had on (all 5 layers). However it was totally worth it, and to see Scheyer cry up close was too perfect.

I can’t say that the student population is very excited for the USF trap game because of the other two home games this week, but we should be ready for this talented team. Assuming everything in DC does not shut down from the three inches of snow, I will be headed over to the phone booth to watch Austin "I’m the shit and I know it" Freeman and company shoot over 70% from the field again (I say this as I cross my fingers). Hoya Saxa!

This game has trap game written all over it, and OldHoya knows a thing or two about trap games. They come once a season and take a team down from their highest highs, to their lowest lows. Kind of like what the 1985 Villanova Wildcats felt like after their cocaine highs faded away, but for them it was more than one time a season.

Would not have thought it at the beginning of the season, but this could be a defining game for the 2009-10 Georgetown Hoyas. USF won't provide the most physically challenging game for the Hoyas, but this will be a great test of our mental fortitude as we enter February. I've been around too long to look past games like this on our schedule, and faithfully subscribe to the ONE GAME AT A TIME motto. I also like a nice glass of pinot noir after work.

In the words of David Guetta (featuring Akon), 'damn you's a sexy chick.'

- Georgetown is 7-7 ATS when playing against a team with a winning record, and 0-3 ATS after scoring 80 points or more.

Georgetown will win this game, but the pick is South Florida +12.5. The Hoyas will keep lightning rod Dominique Jones under control, but he's too good not to get his, and I suspect some late outburst in garbage time will get USF the cover. The final score will be something like Georgetown 79 - USF 68.

The Hoyas are currently 9-7 ATS (that's 'Against The Spread' for those just tuning in).