After our man Varmint in Vegas went 4-7 in his first 11 picks (including a soul crushing and wallet burning 6 game losing streak), we here at the GLOBAL PHENOMENON began listening to your pleas to make a change.  But rather than dump Varmint while he was down on his luck, we decided to make things a bit more interesting while at the same time testing out one of gambling's greatest questions:

Tale of the Tape and Picks after The Jump:

Is this getting better and better by the day or what??? ..I bring happiness to people's lives. I document picks. Never forget that....My record is a blazing 4-11!

My pick for Friday: Sacramento State +3 vs. Northern Arizona  Sac St. has a lot of fight in them and will not lie down in this spot. Sac St might have the worst D1 gym in all of California.  There might be 27 people in the stands tonight. 68-67 Sac St WINS!!!

Empty your bank account and lay heavy.  Sacramento State +3 is a LOCK!!!

I am 4-0 and moving to Vegas.  This Varmint guy stinks like my poo and is embarrassing to the human race. 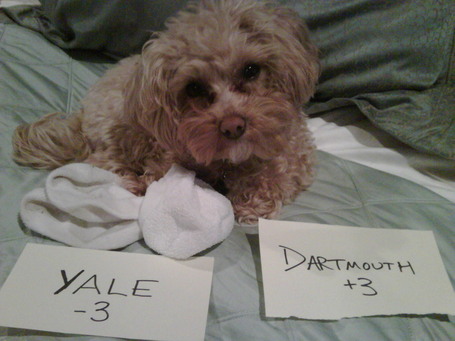 When I lived in NYC before moving to New Orleans, there was a big bulldog who tried to intimidate me by staring at me all the time.  Once I finally got the courage to bark at him though, he turned out to be really nice and let me sniff him.  Take Yale -3.