After our man Varmint in Vegas went 4-7 in his first 11 picks (including a soul crushing and wallet burning 6 game losing streak), we here at the GLOBAL PHENOMENON began listening to your pleas to make a change.  But rather than dump Varmint while he was down on his luck, we decided to make things a bit more interesting while at the same time testing out one of gambling's greatest questions:

Tale of the Tape and Picks after The Jump:

I think if I lose my next 2 picks I will be done.  Losing to a dog has taken its toll on my pride and I am beginning to get some odd looks from strangers at the local 'Books here in Vegas. 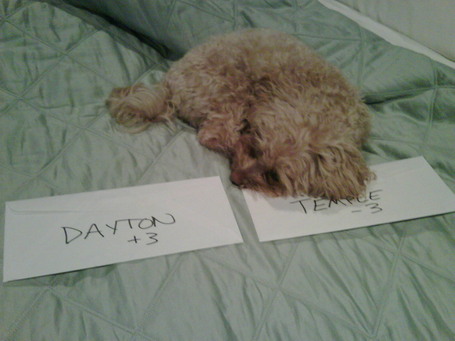 There's a chihuahua named Dayton in the neighborhood and he is always barking at me.  I'm not sure why he's playing basketball now and getting points to boot, but I'm going with Temple -3 because that's where my mommy and daddy go sometimes when they leave me alone in the house.