The Casual Awards: Eat it, Pitino

Share All sharing options for: The Casual Awards: Eat it, Pitino

Well, that was the end of an era.  Should the Hoyas and Cardinals not meet in the Big East Tournament, last night was possibly the last time JT3 will square off against Rick Pitino and the final time Greg Monroe will compete against his bad twin Samardo Samuels.  Unfortunately it did not mark the last time the Hoyas will face Edgar Sosa, as I am absolutely convinced that he and Scottie Reynolds will be back for their 9th year of eligibility in the fall.

The second half of last night's game was as good as the first half was bad, and as usual we here at THE GLOBAL PHENOMENON are handing out some Awards to those most deserving.  Onto the Awards... 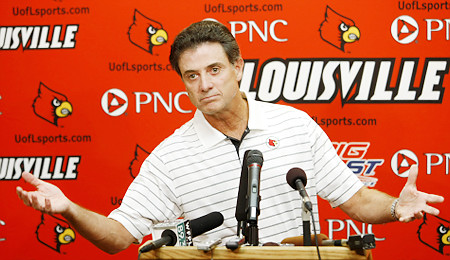 Red is the color of desire.  via assets.nydailynews.com

The Chris Wright Heart of a Champion Award:
Austin Freeman.  Somebody went into the locker room at the half, got in a taxi, went to the Louisville Ruth's Chris, had a nice steak, and then decided he was no longer interested in playing Louisville closely.  So Freeman lit up the Cards for 24 points in the second half and that was that.

The Agent Zero Award:
Chris Wright. A quick glance at the box score shows he had a horrible game.  Zero field goals.  Four points on free throws during garbage time.  A couple rebounds; four assists, but four turnovers.  But this is why the box score isn't enough to get the fully story...

The General Patton Award:
Chris Wright.  Expertly dictated the tempo throughout and took excellent care of the ball against a ball-hawking and pressing defense.  This was a big game for Georgetown in that it showed they can win without Wright scoring in bunches, but more importantly it showed Wright that he doesn't need to be the Wrecking Ball for the team to have success.

Another Award for Chris Wright Award:
How many times have you heard an announcer say that Georgetown has never won a game when Chris Wright sucks and that the reason we lost to Villanova in '85 was because Wright would have had a bad game if he were alive and yada yada yada.  Well Wright proved them all wrong because he only scored four points last night, yet Georgetown won.  What was the differentiating factor you ask?  Well I'll tell you, young chap.  Wright stopped shooting the ball.  In the six games Georgetown has lost when Wright has scored under 10 points, he has averaged nine shots a game for a woeful 28% FG percentage.  In those six games, he shot 1 for 25 from beyond the arc, and averaged four three point attempts a game.  In five of these six losses, Wright missed a shot with less than 30 seconds to go in the game.  Against Louisville last night, after missing three shots in the first half, Wright only attempted one more, at the 16 minute mark of the second half.  It is okay to have bad shooting games, just let those around you take over.  Wright finally learned that last night.

The Tony Kornheiser Award for Most Entertaining Game-Thread Post:

We need a layup drill

(Casual Hint: Any reference to women who shouldn't be wearing blouses with plunging necklines on SportsCenter always wins.)

The Orbit Mist Sugarfree Gum Award for Greatest No-Look Pass Ever:
Have you had this gum?  It is ridiculous.  I am chewing some right now and listening to Amy Winehouse and I seriously feel like I am relaxing in an Opium den.  Whoa.  Oh yeah, Greg Monroe's no look pass to Vaughn in the second half was sweet.

The 25-Cent Gumball Award for Almost Ruining the Greatest No-Look Pass Ever:
Remember that big hollow gumball you could get for a quarter (or a nickel back in the day) at supermarkets or in malls?  If you didn't crack your jaw trying to bite into it, you'd lose all the flavor in about 15 seconds.  I am STILL CHEWING that Orbit Mist gum and deliriously enjoying the Watermelon flavor.  So good it's almost made me forget about Julian Vaughn nearly bobbling Monroe's pass out of bounds. Come on!  Monroe is the best-passer in America.  BE READY AT ALL TIMES!

Aaron Burr Award for Most Efficient Shooter:
Austin Freeman.  29 points on 12 shots?   Absolutely ridiculous.  It was very nice to see this game revolve solely around Monroe and Freeman.  Seemingly every possession ended in a shot or nice pass by one of them.

Paris Hilton Award for Not Protecting the Hole:
The Georgetown Hoyas in the first half.  Just a terrible defensive performance.  Open threes and easy dunks galore for the Cardinals.  And get your head out of the gutter, we're referring to Paris Hilton's mouth

Steel Curtain Award for Awesome Defense:
The Georgetown Hoyas in the second half.  A completely different team.  Like we said in the post game, defense is the key to this season.  We've lost 6 of 7 games in the last two minutes by not getting key stops.  As long as we play defense with some passion, the sky is the limit.

Casual Contest Winner Award:
Big ups to eatthatbox09 for penning what we felt was the best response to one of the questions that the lazy bloggers at Louisville's Card Chronicle were to afraid to answer.  If you're not in DC, email one of us and we'll send you your awesome Casual Headband.

CH:  Do you think Rick Pitino's favorite Ludacris song is "What's Your Fantasy?" and was it playing during his restaurant romp? Speaking of restaurant romps, if you were Pitino and could have a restaurant in Louisville shut down so that you and your significant other could ‘get down', which would it be?

Vinnie Tatum has confirmed that, yes, "What’s Your Fantasy?" is indeed Pitino’s favorite song and was played to set the mood during the aforementioned encounter. He adds that Pitino finds that the song appeals to many of his personal fantasies, not only in reference to the table top, but also the sauna, jacuzzi, and back row at the movie.

Pitino was also interested in trying it in the library on top of books, but he was disappointed to discover that the U of L library only stocks books on tape.

Thank God I Didn't Go To That School Award:
Michigan.  What a day for the Wolverine faithful.  First the football program gets busted for practicing in the off season, then the basketball team goes out and shoots 16-64 on national TV, putting up only 44 points at home.  So much for robbing West Virginia of its coaches.  Let's call it the Curse of the Inbreds.

MajesticOne30 Basketball is poetry in motion.. We are the artist the ball is our pen the court is the paper.. And the hoop is were we publish or work T$M$

Henry Sims Award for Someone I'd Like to See Get More Minutes:
Unfortunately, not Henry.  This award goes to Vee Sanford.  He's a big guard with a sweet flat top and I like his presence on the court.  He's got some swagger to him, and always seems to play good defense.  And by always, I mean the 10 minutes I've seen him play in the last two games.  Give me more Sanford!

The Nikita Mescheriakov Award for Taking Control of a Must-Win Game in the Waning Minutes:
Reginald Delk. In the corner.  Wide open. Dagger for three!  OFF THE SIDE OF THE BACK BOARD!  Warm up the bus.  Yes, the bus with the jacuzzi for Austin Freeman so he can relax on the ride to the airport to fly back to DC a winner thanks to that shot that you would not believe happened were it not for a grainy, blackberry picture taken off the Comcast DVR.  Yeah, well here it is: 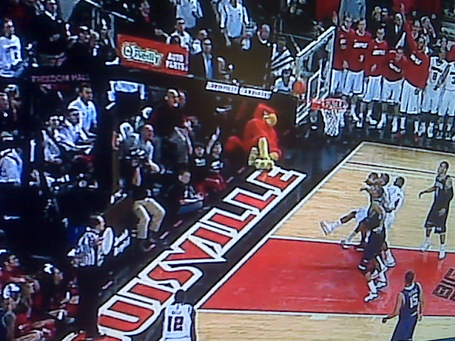 The Lumber Liquidators Plywood Bench Award:
TO OUR BENCH! For only the second time in the history of this blog we hand out this prestigious trophy; this time for TWELVE total points from our bench along with  brief moments of clutch three-point shooting.  Alas, Henry Sims will not be sharing in the award this time, since unlike during the Duke game I didn't notice his enthusiastic cheering from courtside.  But Thompson, Sanford and Benimon easily topped their ten against Duke.  We said it then, we'll say it now: Lack of depth? We are the deep blue sea, baby!

The AAA Award
"Triple A" doesn't get enough credit.  I called in a flat tire minutes after I discovered it after the final buzzer of the Hoyas game, the AAA guy came to rescue me within 20 minutes, fixed the flat in 5, and I was home in time to watch women's figure skating.  Remarkable efficiency.

Buh-Bye Award:
Georgetown can earn the 4th seed in the Big East and a coveted double bye in the Big East Tournament should the Hoyas win out and Marquette drop one to either Seton Hall, St. John's, Louisville, or Notre Dame.  5th seed here we come!

The sun shines bright in the old Kentucky home,
'Tis summer, the people are gay;
The corn-top's ripe and the meadow's in the bloom,
While the birds make music all the day.

The young folks roll on the little cabin floor,
All merry, all happy and bright;
By 'n' by Hard Times comes a-knocking at the door,
Then my old Kentucky home, goodnight.

Weep no more my lady
Oh! weep no more today!
We will sing one song for the old Kentucky home,
For the Old Kentucky Home far away.

They hunt no more for the possum and the coon,
On meadow, the hill and the shore,
They sing no more by the glimmer of the moon,
On the bench by the old cabin door.

The day goes by like a shadow o'er the heart,
With sorrow, where all was delight,
The time has come when the people have to part,
Then my old Kentucky home, goodnight.


The head must bow and the back will have to bend,
Wherever the people may go;
A few more days, and the trouble all will end,
In the field where the sugar-canes grow;

A few more days for to tote the weary load,
No matter, 'twill never be light;
A few more days till we totter on the road,
Then my old Kentucky home, goodnight.

The Georgetown Hoyas are a nationally ranked powerhouse.  With 19 wins in the bag and likely 3 left on the table (figuring wins against ND, Cincy, and one in the BET), the 22 wins and our impressive resume ought to be good for a 3 seed in the Dance and a crushing loss to Cornell in Round 1.

Notre Dame (and more headbands!) is NeXt.