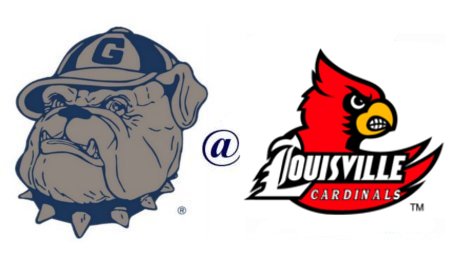 I am proud of our Hoyas. Am I happy losing to Syracuse? Absolutely, positively not - I hate them ever so much. However, most people thought that game was over (myself included) and the team proved all of those people wrong.

I think my most distinct memory from the Verizon Center last year was yelling from the front row, "SAMARDO!" When Samardo Samuels turned around I decided to scream, "Greg Monroe is gonna shit all over you," to which he just laughed. Needless to say, my prophecy was not fulfilled, but Greg came back for a second year to see my assertion through.

Louisville? Lousiville's in the Big East? OldHoya might not have been the valedictorian but knows plenty well that Kentucky cannot rightfully be considered an East Coast school.

But OldHoya does remember Louisville's coach. Recent years have seen him make some - ahem - missteps personally but Mr. Pitino also had history with the Hoyas back when he was coaching Providence. Pitino only stopped through for 2 years before heading back to the Knicks but those were some really important ones, none moreso than 1987, where Gtown and Providence met twice in the postseason.

The first game was the Semifinals of the Big East Tournament and the better team clearly won with Reggie Williams dropping 22 - a little guy named Billy Donovan played 40 minutes for Providence that night but was held to only 11 points and the Hoyas romped by 18. OldHoya has made it clear that some refs have been blowing the whistle way too long and although they T'd old Pitino up in this game, the squad was Jim Burr, Tim Higgins, and Jody Sylvester. You can see nearly every one of them calling games to this day and though OldHoya continues to toil at work, he's not chasing All Americans up and down the court 5 days a week - might be time to hang up the whistle, guys.

OldHoya cheered Gtown to the 1987 Big East Championship and was greatly enjoying Reggie & The Miracles' run through the NCAA Tournament until they came up on Providence. Unfortunately, Pitino had learned something from the loss and changed his entire strategy, giving the ball to his forwards rather than allowing his guards to chuck it. The game ended poorly with Gtown losing by 15. Providence went on to lose to Cuse (who in turn lost to Indiana).

Louisville, though, huh? In the Big East? Wild

The Hoyas are coming off two straight losses and need a win to stay in the hunt for the valuable 'double bye' in the Big East Tournament. The Cardinals are squarely on the Bubble and need a win for postseason survival. Normally I go with the team that needs a win more, but before I make the pick let's take a look at some numbers that matter:

- Louisville is 3-10 ATS after a Conference game.

- Louisville is 1-7 ATS coming off a win against a Conference rival.

- Louisville is 6-11 ATS against a team with a winning record.

- Georgetown is 2-1 ATS on Tuesday nights.

2-1 ATS on Tuesday nights! Sold. The pick is Georgetown +4, with a final score of Hoyas 76 - Louisville 71. Louisville needs this game more, but Georgetown is the better team this year and should rebound coming off the losses to Rutgers and Syracuse. You can take Pitino, I'm taking the points.