Sleeping With The Enemy: The Running of the Bulls

Share All sharing options for: Sleeping With The Enemy: The Running of the Bulls

So let's see where this game falls on Georgetown's schedule:  Syracuse, Duke, South Florida, Villanova.  Hmm....The Hoyas better not take USF lightly, because at 14-7 (4-5), winners of 4 of their last 5 games and armed with a guard in Dominique Jones who is shooting the lights out, these Bulls can play with anyone.  But don't just take it from me.  As usual we here at Casual Hoya are bringing you everything you need to know about our next opponent from behind enemy lines.  For this go-around, special thanks to Scott Carter of the Tampa Tribune for providing answers to our penetrating questions.  Mr. Carter, this Corona's for you. 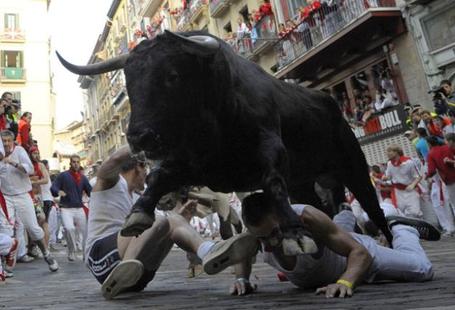 CH:  What can Georgetown expect out of this year's USF squad? Who are the best scorers? Rebounders?

A better game than usual to start with. The Bulls still aren't an elite team by any means, but at least they appear more competitive. They have won three consecutive conference games for the first time in school history and Dominique Jones is the main reason why. The junior guard is averaging 37 points a game over his last three and is developing into one of the Big East's top players. As for rebounders, JUCO transfer Jarrid Famous is USF's top rebounder in the absence of injured forward Gus Gilchrist. (Casual Note: I am pondering changing the blog's last name to Famous).

Were you surprised when South Florida was invited to the Big East?

It was a football decision pure and simple. Do the Bulls belong in the Big East in basketball? Some would say not. USF is always going to struggle to be competitive long term in the Big East, but if Coach Stan Heath can get two or three strong players to build around like he currently has in Jones and Gilchrist, then the Bulls can surprise people. The school doesn't have much of a basketball tradition, so three consecutive league wins has fans excited about the team's potential.

More with USF after 'The Jump':

Stan Heath, who wildly overachieved while at Kent State, really hit the skids at Arkansas before landing what appears to be a good job at USF. He's struggled mightily there and has tried to give it a run by luring suspect transfers (e.g., Mike Mercer) and potentially running afoul of the NCAA. Realistically, USF is - at best - the fourth choice for a recruit in Florida, following UF, FSU, and the U. But with the astonishing amount of talent in Florida (and we don't mean on the beaches), why hasn't Heath been able to get it done, particularly while someone like Seth Greenberg had them rolling for a while?

Heath is only in his third season, and he took over a program that was really in shambles. He's had to clear away some of the dead weight and tried to place his stamp on the program. Basketball success seems to always be fleeting in the state of Florida except for Florida's recent success under Billy Donovan, and you saw how the Gators quickly fell back to the pack. Right now, USF and FSU appear on the upswing, and Florida is trying to regain its footing. I think it's a little too early to give Heath a definitive grade at this point, but considering the recent history of the program, a 14-7 record and 4-5 Big East mark is a pleasant surprise.

Can South Florida ever be truly competitive in Big East Basketball? What do you think needs to happen in order for USF to be a contender?

I say yes, but only for short stretches. There are just too many traditional powerhouses for a school like USF to compete regularly for a conference title or NCAA berth. For that to happen, Heath has to catch lightning in a bottle sort of the way he has with Dominique Jones. Jones was relatively overlooked coming out of high school and is now considered a strong NBA prospect. He'll also have to take high-risk transfers such as Gilchrist, Mike Mercer and Anthony Crater and hope they produce on the court and stay out of trouble off it. Bottom line is that it will take a lot of hard work and some luck.

Bizarrely the Tampa Bay Area may be home to some of America's finest restaurants. First, at Bern's, please tell us what your optimum order is and what wines from the world's-largest wine cellar you would choose as an accompaniment. Furthermore, how great is the black bean soup at Columbia?

I've only been to Bern's a couple of times, but you can't beat a big juicy filet and then a trip to the dessert room. That's what really makes a visit there so memorable. You get your own little dining booth and some of the best sweets in the world. Personally, I'd take a trip to the Columbia first because of the great mojitos and Cuban food. The 1905 salad will make you think about becoming a vegetarian it's so good.

Can you give us some context on the "Bulls" nickname?

As far as I know, USF's campus occupies land once used to raise Bulls. There could be a better story than that one. What I do know is the Rocky the Bull, the school mascot, gets around on two legs pretty well. 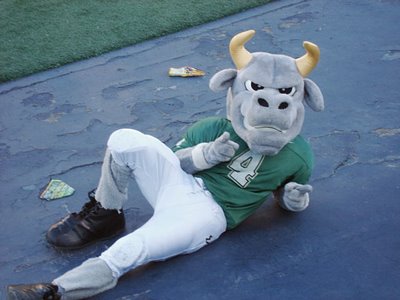 We're coming to get you, Georgetown!  via 4.bp.blogspot.com

In a shocking twist, Jim Leavitt led USF to the top of the college football rankings and was almost immediately shown the door, this after 14 years as head coach. Was this a case where the administration had been looking to fire him for some time or have expectations simply become unreasonable? If the latter, how much longer does Coach Heath have and what are realistic expectations for the hoops program?

There's no question some folks weren't too disappointed to see Leavitt shown the door, but the school's administration offered him an opportunity to apologize for whatever happened in the locker room with player Joel Miller and he stuck to his story. Bad way to see his career at USF end, but Skip Holtz has provided a new energy to the program. As for Heath, I'd be surprised if he isn't given at least five years to produce a winner here. I think in Year 3 most fans and school officials are pleased with the job he has done.

Isiah Thomas is the new head coach at FIU and has led them to a 7-16 record. Inexplicably (wink-wink), some of the nation's top recruits are interested in a program whose main claim to fame was having an NBA backcourt in Carlos Arroyo and Raja Bell during the Shaky Rodriguez era, and all this while playing in the awful Sun Belt and without decent facilities. In contrast, USF plays in the nation's premier hoops conference, is located in a casual town, and actually has decent facilities. Is this a matter of Isiah having deeper pockets to pay kids or is there more support from the administration at FIU as compared to USF?

You know more about Thomas' recruiting tactics than I do obviously J ... Any time a coach with such name recognition is hired, kids are going to be attracted to that school. But that only lasts so long; it all comes down to winning in the end. As for resources, USF does have more than FIU at this point, and playing in the Big East is certainly an advantage USF offers over FIU and other small state schools.

It's Saturday night in Tampa/St. Petersberg! Where are all the cool kids at USF going to hang out?

Somewhere I'm not probably. I'm a late thirtysomething and have a wife and daughter, so my off time is usually spent chilling with family and friends. Ybor City, Channelside in downtown Tampa, Clearwater beach and other spots remain popular with the college crowd. If you prefer a metro university setting compared to a college-town atmosphere, Tampa has a lot to offer.

How do you see the game playing out? Final Score prediction?

Georgetown looks awfully strong right now and had an impressive win over Duke.  As well as the Bulls are playing, I don't see them extending their winning streak...I'll say Georgetown 81, USF 71.

And now, for your entertainment until tonight's massive premier of 'Lost', please enjoy a few of David Caruso's legendary intros on CSI:Miami.