It is time to do something about the invasion of opposing fans at our home arena.  I am not going to make this some tired political rant or grassroots movement; I already attempted to do that in December with no success.  I am just going to introduce a new feature on Casual Hoya called The Traitor List.  The Traitor List is simply a compilation of lower bowl seats that are sold to opposing fans.  This list is a living and breathing organism that will be updated daily as you let us know which fans are selling their Georgetown seats souls to our opposition. 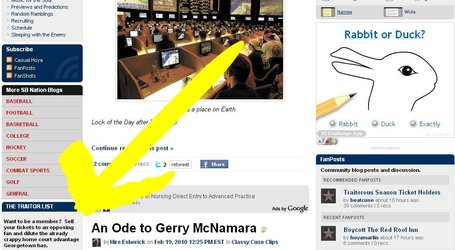 So next time you are at Verizon, take note of opposing fans sitting in the lower bowl.  Those tickets are part of Georgetown Season Ticket packages and should not be in the hands of non-Georgetown fans.  Be thorough and diligent, take pictures and notes.  Ask the opposing fans where they bought the tickets - the more information, the better.

What we do with this list is unclear and I am open to suggestions.  We could give it to the Georgetown Athletic Department, but they already hate us.  We could just leave it on the site, as some sort of traitorous branding, but the people that sell their tickets probably don't visit this site.  At the end of the day, it might just turn into group therapy for those of us that are sick of sitting next to Orange, Green and Gold shirts - and I am fine if that is the result.

Exposing the Traitors after The Jump:

I want to be perfectly clear; this is not an attack on the Georgetown Ticket Office, I realize they are severely understaffed and Steve Alleva is doing a phenomenal job.  Walking into Verizon for the Duke game and seeing a Sea of Gray was one of the most beautiful things I have ever seen, and we have him and his staff to thank for that.

This is an attack on those season ticket holders that take the incredible seats they are allowed to purchase and sell them to opposing fans.  Look, we are a small school playing in a big arena in a major city.  I understand that we will never have a true home court advantage.  But you do not have to make it worse by giving away the small advantage we have.  How can you possibly justify profiting off of tickets to an event staged to promote school spirit?  This isn't a business or investment opportunity, you are reaping benefits at the cost of a school you supposedly support.  Did you pay for your education with fake checks as well?  Do you scalp tickets to your daughter's dance recitals?  Promote and take pride in your damn school!

For those smart asses that want to bring up capitalism and free markets - how about selling your tickets on the HoyaTalk Ticket Exchange.  Sell your tickets to Georgetown fans and don't pay StubHub fees!  It is a good feature they have set up to foster ticket transfers between Hoyas.

And to those opposing fans that read this and laugh, smile, giggle and Tweet SMH: Congrats.  Your glory and amusement is our anger and pain.

Despite my intentions, I guess this is turning into a grassroots movement, someone come up with a clever name, I am exhausted and sad after writing this.

A special thanks to beatcuse for getting the ball rolling on this - great idea.