Sleeping With The Enemy: Fear The Orange

Share All sharing options for: Sleeping With The Enemy: Fear The Orange

Has there ever been a Georgetown squad quite like this one where, in mid-February, no one following the team can say with any degree of certainty how good they really are?  Is Georgetown the team that lost to ODU and Rutgers?  Is Georgetown the team that beat Duke and Villanova?  Unfortunately we here at THE GLOBAL PHENOMENON are also having a difficult time figuring Georgetown out.  Some think the Hoyas are destined for Indianapolis, others are checking out potentially casual 1st round NIT sites.  One thing we are united on, however, is our unanimous disdain for Syracuse.  Ahead of our second battle with the Orange at Verizon on Thursday night, we're once again going head-to-head with Troy Nunes is An Absolute Magician, the greatest Syracuse blog on the interweb to bring you everything you ever wanted to know about our bitter rivals.  After you're done reading this, check THIS out for our responses to some of their questions.  Troy Nunes, this Coors Light is for you. 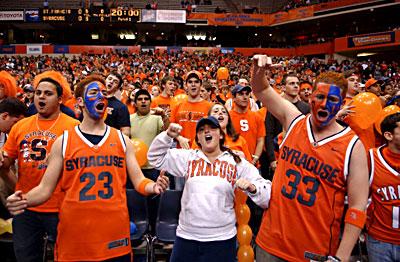 Unfortunately these clowns were unable to storm the court against Louisville.  via 1.bp.blogspot.com

CH: What happened to Georgetown at the Carrier Dome? How was ‘Cuse able to weather that initial 14-0 spurt and then dominate the rest of the game?

Syracuse seems to have developed a knack for either playing poorly at first and taking over late or establishing themselves early and then breaking down later. You guys got the former. I don't know if SU plays better when they've got the odds stacked against them or what but they seem to respond much better when the game is close than when they've got a comfortable lead.

Once SU took the lead and the crowd got into it, the momentum-meter has swung irreversibly in Syracuse's favor. I would assume your fans will do something similiar, but, I guess we'll see.

Ever since ‘Field of Dreams,' every man has enjoyed a nice game of catch with his father. And I suppose hoops players enjoy a nice game of 1-on-1 with their dads. Be honest: getting matching FAMILY FOREVER tattoos and talking to your dad multiple times in the week is disturbing and wrong, right?

How else would we know that Leo and Andy Rautins are related? It's not like anyone ever mentions it during a Syracuse broadcast. Ever. Thankfully, no broadcaster is so lazy as to repeat the same ten "interesting bits of info" each and every game. I'm sure that won't happen at all during this game. Nope. Not at all.

More with Syracuse after The Jump:

You guys celebrated like we had just landed on the moon after kicking our ass at the Carrier Dome last month, but failed to acknowledge that the Hoyas handed the Orange a similar ass-whupping last year at Verizon, and then collapsed in epic fashion. Do the Orange fear any sort of collapse in the near future? Wouldn't losing a few more games take a little pressure off? 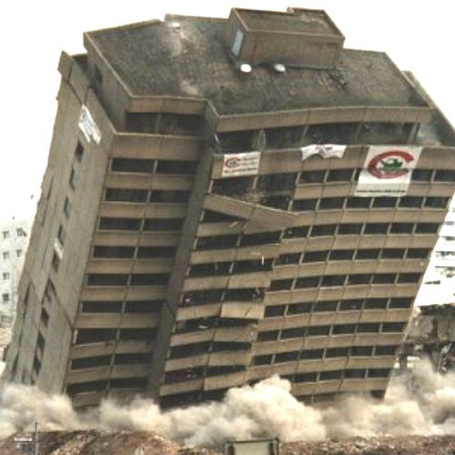 As much as Syracuse has been at the top of the rankings all season, we've still got a little bit of a chip on our shoulder. A lot of folks don't hold SU in the same esteem as Kansas or Kentucky and we feel like we should be. We also having been playing very dominating basketball for a while, just barely getting past UConn and now losing to Louisville.

The Louisville loss put the fear of God into us because it validated that fear we've had for a little while. That we might be fading just a bit. A 2nd loss in a row, to Georgetown no-less, would cause a catastrophic system crash in Cuse Nation. We're working under the belief this is special team that's destined for great things. We don't want to find out we might possibly be wrong.

MASN is infatuated with the 6 overtime game, admittedly a spectacle, but if I walked through Syracuse and asked the best memory of the program over the past 10 years, at least a few people would say the national championship, right?

A lot of people would say the Six OT game just because its so much fresher in our minds than the 2003 Title game. But at the end of the day, winning the National Title, in a great game, trumps anything else. You can't possibly say winning the national title in a game that came down to the final second isn't the best memory you have of the program...just not possible.

Our own WadeTandy inexplicably declared that Arinze Onauku would be a starter on his All Big East team. Is there any way to defend such a selection? Would he even make a Syracuse all big man team over someone like Otis Hill?

Here's the thing...take away the free-throw shooting for a second. Now, Arinze Onuaku is the best Syracuse big man since...well, Otis Hill. Okay, maybe Etan Thomas. But he's been even better than Etan was in school. We really haven't had that many. It's mostly been a parade of goofy white guys (Elvir Ovcina, Criag Forth, Billy Celuck). AO led the Big East in FG percentage last year and I believe he's on pace to do it again. If he was only just a little more competent from the free-throw line, you wouldn't even be questioning it.  But God...he's a terrible free throw shooter.

John Wallace infamously signed a shoe contract with Karl Kani and Derrick Coleman signed with BK. Can you think of any worse shoe deal in basketball history?

Unless Marius Janulis signed an endorsement deal with Scrulnik Shoes & Guns in Lithuania (I'm assuming this is a real company), I think you probably nailed it. Though at the time BK wasn't nearly the bad idea that Karl Kani turned out to be.

In an incredible line of unathletic guys overachieving, Lawrence Moten (a DC native) became the Big East's all-time leading scorer and will likely be passed by Luke Harangody. Records are made to be broken (or so the cliché goes) but what's the general feeling in Orange-land about that travesty?

It's a bummer because Moten is probably the most over-looked Syracuse star of the Jim Boeheim Era. Like you said, he's the all-time leading scorer in Big East history (for now). And yet he's barely ever mentioned in the same breathe as Carmelo, John Wallace, Derrick Coleman or Gerry McNamara. He was the victim of some really bad NCAA Tournament years so that probably affects his legacy as much as anything. John Wallace isn't remembered half as fondly if the '96 Orangemen lose in the Sweet 16.

I believe someone has actually broken that down before and came to the conclusion that UConn is our nemesis but Georgetown is our arch enemy. We can probably stomach a loss to UConn more than Georgetown. And that extra ten years of bitter rivalry between us cements it.

What happens to Cuse when Boeheim retires?

I'm scared. I'm very scared. In theory, this game should go to the Hoyas. But who knows which Georgetown team is showing up. My feeling is that the good one shows as they seem to play up or down to their opponent. If that's the case, I think we're in for a barnburner. There's no way I'm saying Georgetown wins anywhere, let alone on a Georgetown site so I'll say Syracuse 71, Georgetown 70.

Do you realize that I hate you?

Quite well. Very much so, sir. But it feel like a gentlemanly hate. Quite neighborly. 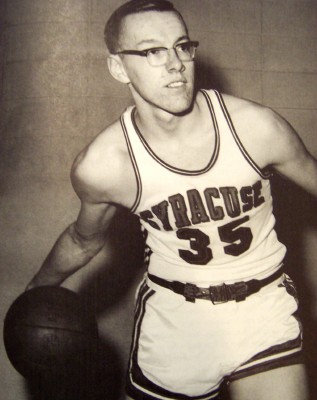