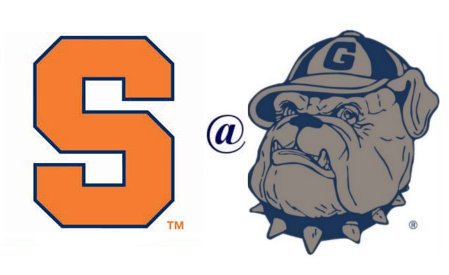 I hate this deathly sickness that I have right now. In fact, I am pretty sure I have whooping cough or some other serious illness that I should probably get checked out. However, when compared to the frozen tundra that is Syracuse, everything (even the plague) seems pleasant. And when I say I hate Syracuse, I primarily mean the basketball team and the pathetic craphole they call a school, but I really have begun to hate the city as well. In fact, I was out at Rugby the other night hitting on some chick, until I found out that she was from Syracuse, New York, I casually dismissed her from my presence.

I look forward to the battle that will determine if good triumphs over evil. Personally, I am going to be rooting for good. However, to all those Syracuse fans out there who dislike world peace and enjoy the suffering of innocent puppies, shame on you.

OldHoya's lived a full life with plenty of Gtown highs and lows and therefore chooses to forget everything about the recent Syracuse and Rutgers debacles. In fact, what debacles? Let's move forward.

It's well documented that Syracuse is a cold desolate wasteland and frankly, OldHoya questions why anyone would ever want to live there. In the spirit of competition, OldHoya began wearing a casual Jim Boeheim mask to the games many years ago - back then, Boeheim loved the mask, told OldHoya that he looked better than Boeheim did, and even signed a poster where OldHoya was wearing the mask. Now - NOTHING. Clearly there is no sun and no reason to be happy in upstate. Pathetic.

We all know the stakes - this is the biggest game of the season, ESPN will be there, and this is a chance for the Hoyas to dominate. OldHoya gives a shout out to everyone on the list to be loud and demonstrative from the opening tip.

That 2 point spread indicates that Vegas doesn't really have a clue as to what will happen. Could Georgetown win by 15? YES. Could Syracuse win by 15? YES.

I wouldn't go anywhere near this game, but since I have to pick an outcome, let's look at a few relevant numbers:

- Syracuse is 5-1 ATS in lined road games, and 13-6 ATS when playing against a team with a winning record.

- Georgetown is 6-7 ATS against conference opponents, and 9-8 ATS when playing against a team with a winning record.

The pick is Syracuse +2, but I'll take the Hoyas to win in a squeaker so that everyone on the blog doesn't kill me. Final score: Hoyas 73 - Orange 72.

Again, your money should go elsewhere on ANY OTHER GAME in ANY OTHER SPORT. I will gladly exchange an ATS loss for a big Hoyas win tonight, but that damn 2-3 zone is a nightmare for Georgetown's offense.

The Hoyas are currently 11-9 ATS (that's 'Against The Spread' for those just tuning in).