Open Forum: The Worst Loss of the JT3 Era

Share All sharing options for: Open Forum: The Worst Loss of the JT3 Era

We have previously detailed the best games of the JT3 Era, but after Sunday's pathetic loss to Rutgers, a team that nearly fell to Division II Caldwell College five days earlier, it's time to reflect on the worst loss during Thompson the Third's tenure on the Hilltop. 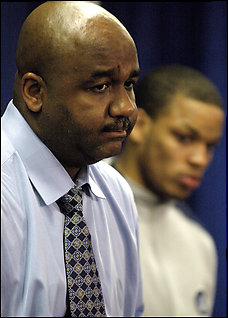 Rutgers was bad. But was it the worst? via media3.washingtonpost.com

I am sure everyone has an opinion on this so share your thoughts in the comments and we will put a poll up later to determine the consensus pick.

For me, the worst loss is Rutgers. Granted, it is still fresh in my mind, but the loss came when the team had the most to gain from a win and lose from a loss. We all gripe about the first St. John's loss last year, but the Hoyas were down and unranked at the time. They were 6-10 in conference play and had lost 9 of 12 previous games. Against Rutgers, Georgetown was ranked #7 and had the opportunity to take sole possession of third place in the most competitive conference in the country by beating a Rutgers team that had two conference wins at the time. Rutgers had an RPI of over 100, well below powerhouse programs Iona, Wofford and Wright State. And oh, Georgetown had previously defeated the Scarlet Knights by 25 points.

Even though we might have all been delusional for thinking that Georgetown had a shot at a two seed in the NCAA Tournament, this was not a game Georgetown should have lost. This loss is not acceptable, it is not a blip or outlier, it is cause for alarm that we can play so well and so poorly in a span of one week.

I won't go overboard/Hoyatalk-ish and question JT3's coaching abilities - that is poppycock. The man has single-handedly done more for this program in a shorter period of time than any other coach could have done; but I want to see a new team on Thursday, and want to see Chris Wright sit on the bench if he pulls the me-first bullshit he did on Sunday. There have been rumors about Wright for awhile, that his complaining about playing time was the cause of the collapse against Davidson in 2008, and of course the infamous fight in Durham last year for which Jesse Sapp took the fall. But Sunday's game was a perfect display of how selfish play can disrupt a team. There is plenty more blame to go around, see yesterday's awards for a full list, but Wright's performance stands out in my mind. If JT3 doesn't talk some sense into him, hopefully the other players will. While many point to the 16-0 record Georgetown has when Wright scores 10 or more points as proof that we cannot win without him, I think the Villanova game is a great example of how we can. We dropped 103 points on the #2 team in the country despite 7 points and a 2-6 shooting performance from Wright. We can afford to have bad games from Wright; we cannot afford for him to bring the rest of the team down when he does. Being a leader does not necessitate perfect execution all the time, rather it requires that you to take a step back when you are having an off-night and let others dictate the game. The sooner Wright learns this, the better and more consistent Georgetown will become.

For those looking to move on from the Rutgers debacle, come back this afternoon when we start looking ahead to the Cuse game on Thursday, but for now, I am just not ready to move on, not yet, not after that disaster on Sunday.