Casual Communication: Where We Fight Syracuse and Villanova

Share All sharing options for: Casual Communication: Where We Fight Syracuse and Villanova

After a week long hiatus from Casual Communication, we're back, with more drivel that sort of relates to Georgetown basketball.  As usual, get your questions into Jeff Green's Dad and they will definitely get answered for next week's edition.

We have two main rivals in the Big East this year - Syracuse and Villanova (I think West Virginia is overrated).  Hypothetically, Georgetown's shot of winning the Big East Tournament and getting a #1 seed is contingent on you winning a fight against a player from each team.  Who are you choosing? Who would be the last person you'd want to fight? Jeremy, NY

I'd hate to have the pressure of me beating the crap out of an opposing team's player for our potential #1 seed in the NCAA Tournament.  That said, I was a green belt in Tae Kwan Do growing up, and currently take a boxing class once a week, so you're in good hands Hoyas.  Jab, cross, jab, cross, uppercut.

Villanova:  The player I'd have the best chance against is Taylor King.  He is slow, spastic, balding, and an idiot.  If I were a Villanova fan, I'd curse every single day having to watch him play.  I'd definitely use the Rope-a-Dope tactic, let him tire himself out, and then go to work.  The player I'd least like to fight on Nova would be Reggie Redding.  There's something crazy about that kid, like he could snap at any second.  My brother took a class with him as a freshman and claimed he was the least friendly person he had ever encountered.  He scares me.

Syracuse:   Clearly, the easiest person to fight would be Andy Rautins.  Between his gelled hair, scrawny body, ridiculous tattoo, and bromance with his father, I'm pretty sure I'd make quick work of him.  Or as quick work as I could, considering I am 5'10" and 155 pounds soaking wet.  The last person I'd want to fight on Syracuse, and maybe in the entire world, would be Arinze Onuaku.  I'm pretty sure he could kick my ass with just a glare. 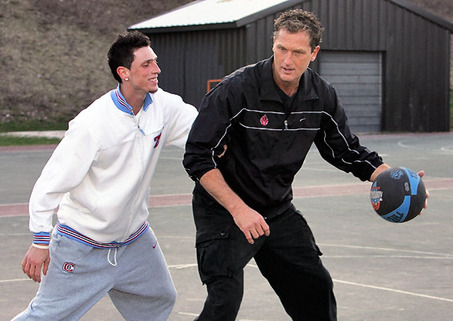 Just two guys, one ball, and one really creepy relationship.

More questions after the jump.

You are correct.  It was my first time ever betting on Georgetown, and let me tell you, it was doubly stressful.  First, we played like crap for the first 30 minutes, and then I was frantically cheering for made free throws when the game was sealed.  All in all, not that enjoyable, but now I'm RICH.  I will celebrate like I did three weeks ago after the Duke game - get drunk enough to get kicked out of the Irish Channel and then pay $114 for a room at the Red Roof Inn for a nice blackout slumber, but instead of sleeping in the bed I pay for, I'll sleep on the floor outside the room.  Yes, that is the best use of my winnings.

Now that the Hoyas have an established 'Big 3' in Monroe, Freeman, and Wright, who would you prefer taking the last shot with 6 seconds left when the Hoyas are down 1 to Cornell in Round 1 of the Dance? - Sini Kel, DC 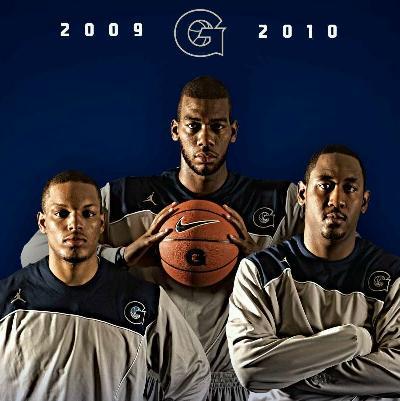 One of us will end your season, we promise.

You're forgetting Nikita Mescheriakov.  I'd like for him to take a last second shot.  Oh, that already happened?  That's right.  Anyways, all three have shown the propensity to hit a big shot in tight situations.  Wright did it last year against Syracuse, singlehandedly sending the game to overtime, which we ultimately lost.  Freeman carried us on his broad shoulders to rally from 19 down to beat UConn this year.  Monroe hit the game winner against Temple, which continues to be an impressive win, as much as watching the game made my eyes bleed.

Of the three, I think my third option would be Wright because he has a little DaJuan Summers syndrome, which is having more confidence than actual talent.  I could see a scenario where we are down two in the waning moments and he tries to pull up for a 25 foot game winning three.  And then airballing.  That would suck.

My second option would be Monroe.  He is quicker than almost anyone covering him, and has enough court vision that he could dish if the defense collapses on him, similar to what Jeff Green gave us back in 2007.  The difference is that Jeff was a threat from 15 feet, whereas Greg hasn't shown that he can consistently knock down a 15 foot jumper.  A defense will know that Greg can't hit that shot, so they could sag on him.  Also, he has the hand strength of a 13-year-old girl, which scares me in last second situations because refs tend to swallow their whistles.

My first option would be Freeman.  He can get his own shot off the dribble, and has a quick enough release to get off a shot from anywhere.  Freeman, with his weight loss, has a unique combination of speed and power that very few players in the country possess.  He'll blow by a bigger defender, and outmuscle a quicker one.  He finishes strong around the basket, and has the calm demeanor that is key in late game situations.  If we end up in a tight situation, he's the one I want taking our last shot.  Though, if in some odd circumstance we end up in a spelling bee to decide our season's fate, he will be my last choice.

What the hell is this BUZZ thing on my gmail?  Chris, Washington

You're asking the guy who still is mystified by Twitter.  From what I can tell, it's basically Facebook on your gmail.  If you use Google for updating your daily reading, it will allow your gchat friends to see what you're reading, your photo albums, etc.  And it looks like you can update your Google Buzz status, similar to Twitter, only for your gchat friends.  I could be dead wrong, and if so, I'm sorry Sergey and Larry.  Also, awesome Super Bowl commercial, definitely my favorite of the night.

The fact that any women showed up at the Casual Hoya blogger meetup has to be some sort of miracle. If you could meet any woman famous for being on the internets, who would it be?  Footer, DC

I was not at the GLOBAL PHENOMENON's first in person meeting because I am still banned from the Irish Channel, but I did hear it was a wonderful success.  Ladies love bloggers, that's been clear for a long time.  Nothing more attractive than writing about your alma mater's college basketball team to the point of obsession.  But here's what's interesting about the staff of the GLOBAL PHENOMENON.  I am the youngest person on staff, haven't met two of the other members, and was severely intoxicated when I met Hire Esherick and Lordnick.  Yet, my two biggest celebrity crushes are Katy Perry and Kim Kardashian, which happen to be the two biggest crushes for all of Casual Hoya.  We have SO MUCH IN COMMON. 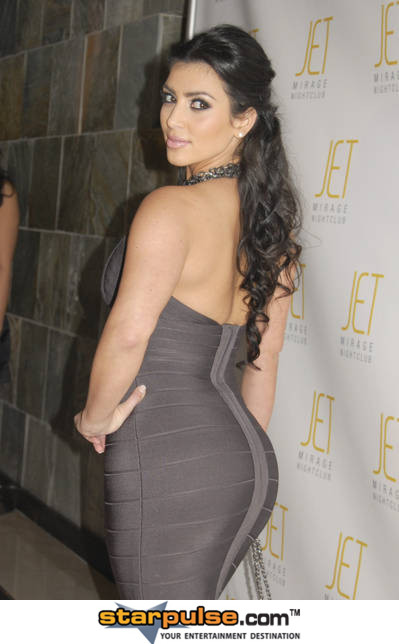 Kim, if Reggie ever gets boring, you can find me in my parents' basement.  Love, Jeff Green's Dad

So we know that the Global Phenomenon is a TV watching crew with all the mentions of Jersey Shore.  What about Lost?  Tim, Philly

Unfortunately I don't watch Lost.  I tried one time in Season 4, and needless to say, I was Lost.  Get it?!  But yeah, umm I assume Greg Monroe is Matthew Fox's character and Austin Freeman is Josh Holloway's character.  Does that sound right?

Yes, in fact, I am.  Thank you very much.  I am really proud of him.  It's weird, all this time Georgetown fans were busy chanting at Jeff's Mom, but they never knew his dad had such talent for comparing Georgetown players to Jersey Shore characters.  You'd think they'd reevaluate wasting all that energy chanting "Jeff Green's Mom" and actually focus on the real talent in the family.

But in all seriousness, Jeff was my year at Georgetown, and was responsible for so many of my favorite memories at Georgetown so I thought this was the best way to pay him back.  Even if he doesn't read the PHENOMENON, I'm sure somewhere inside him, he appreciates it.  You're welcome buddy.

if everyone stays next year - how good would we be? Would we seal up some holes on our bench?  Marc, NJ

If everyone stays next year we will be ranked #1 in the preseason, without a doubt.  We'd have three seniors and two juniors, including Monroe, who would probably be the preseason Player of the Year.  As for the bench, Hollis Thompson, Henry Sims and Jerrelle Benimon would have another year of experience, and we'd be adding Nate Lubick and Markel Starks.  Man, we'd be nasty.  It's probably all for naught though, I'd put Monroe's chances of staying at about 10%.  It's a shame too, because it'd be twice in four years that we'd have the #1 team in the country if our skilled big man would come back (Jeff Green in 2007).  Jeff's "testing the waters" was particularly painful because he waited for the last possible day to declare.  I hope Monroe just pulls the band aid quickly if he plans on declaring.

It will be interesting to see how we'd be next year without Monroe.  He is so instrumental to this offense, and impacts the game in so many ways, as we saw against Providence.  It's a bit worrisome that JT3's offense is predicated on having highly skilled passing big men because they don't grow on trees.  Skilled passers like Green and Monroe have once-every-ten-year type passing ability, and Georgetown fans have been blessed the last five years to watch them in a motion offense that rewards high basketball IQs.

For now, we should definitely enjoy Monroe while we have him.  We also have a really good chance at contending for a National Championship this year.  When this team is playing its game, it's hard to imagine anyone beating us.  Then again, our last four games we've throttled Villanova and Duke, lost to South Florida, and eeked out a win at Providence, so it's hard to imagine this team putting together six straight games of great play.  But we shall see, that's the beauty of March Madness, or so I'm told by Jim Nantz. 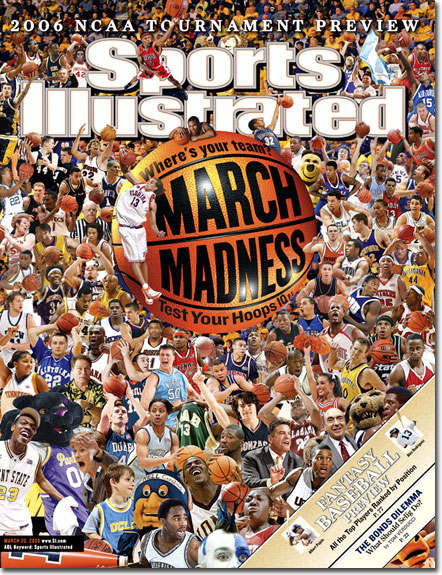