Share All sharing options for: The Casual Awards: Here Comes The Delusion...

To refresh your recollection, the Georgetown Hoyas have wins at Old Dominion and against three conference champions (Coastal Carolina, Wofford and Utah State) plus a vicious "road win" at the 8th ranked team in the country in Mizzou plus a convincing win over a top 5 team in the ACC in NC State. If Georgetown can beat Temple and Memphis on the road while taking care of business at Verizon against Appalachian State and Loyola, the Hoyas will have completed the toughest out of conference schedule in the country undefeated and will have built a resume so strong that assuming The Holy Trinity stays healthy it will be difficult for the Selection Committee to seed Georgetown anything lower than a 2 seed come March. Is that delusional enough for you? As usual after Georgetown's latest VICTORY we here at THE GLOBAL PHENOMENON are handing out hardware to those most deserving. Away we go... 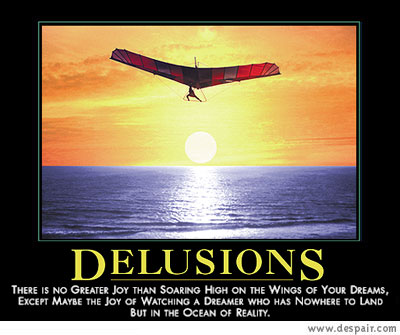 The Chris Wright Heart of a Champion Award:
Chris Wright. I shall refer to the Casual Postgame Recap for this one:

Wright attacked the basket time and time again, getting easy layups while scoring 21 points on 9 shots. He added 4 steals and 2 assists. No other Hoya was in double figures, but 5 other players had 6 points or more. I'm not sure what happened to Wright over the summer - whether it was the departure of Greg Monroe or the Chris Paul camp he attended - but it is impossible to overstate how spectacular and composed Wright has been. He is controlling games on both offense and defense, hitting enormous shots, and providing the right type of fiery leadership that last year's team lacked. It would be silly to say that the Hoyas are more talented without Monroe, who was arguably the best passer in the nation last year. A team never gets better losing a lottery pick. But this team is just different. Part of the reason is because there is one unquestioned leader this year - Chris Wright.

The Dickie V Award:
After the Missouri game we figured only Doug Gottlieb could own this one, but Orrin Hatch is making a serious run at it. I guess ESPNU was thrilled to be able to stroll out a United States Senator during its broadcast, but Orrin Hatch's 5 minute stint was about 5 minutes too long. A mind-boggling and rambling session about the BCS and relatively nothing related to hoops or especially what was occurring on the floor, this was just awful. 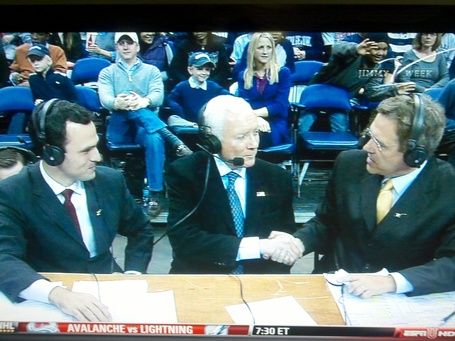 Nikita Mescheriakov Memorial Award:
Nate Lubick. Casual airballed three pointer. I like you Nate. I believe you are going to be a great four year player. That said, IF YOU EVER SHOOT ANOTHER THREE POINTER I WILL KILL YOU. Don't take that literally, I just mean I don't enjoy when you airball 23 foot jumpers. What is it with big men at Georgetown trying to shoot threes? Julian Vaughn shot a ton of disgusting looking threes last year too. Stay inside and get your points on layups, dunks and tip ins. We clear?

Kat Stacks Internet Tough Girl Award:
Syracuse fan Alex O. Last year, this dude gained some notoriety by mocking Austin Freeman's diabetes. He spent his Saturday night trying to get a rise out of Chris Wright on Twitter. Alex O is really making a name for himself on the internet. I solemnly swear that if I see you at the Syracuse game, I am going to punch you square in the face. I am not trying to be funny here because I am positive I could absolutely pummel you. If you want to continue to act tough on the internet, you can act tough in person, right? We shall see.
Greg Monroe Special Passer Award:
Henry Sims. Am I crazy or does he look like Jeff Green in the high post out there? Sims led the team in assists yesterday and could have had a few more had his teammates finished a couple bunnies. I divide this team into three tiers based on how comfortable I am when a player has the ball in a close end-of-game situation. Wright, Freeman and Clark are Tier 1 guys. Hollis and Julian are Tier 2 guys. Sims, Vee, Markel and Nate are Tier 3 guys, but the more they play, the more comfortable I am getting. 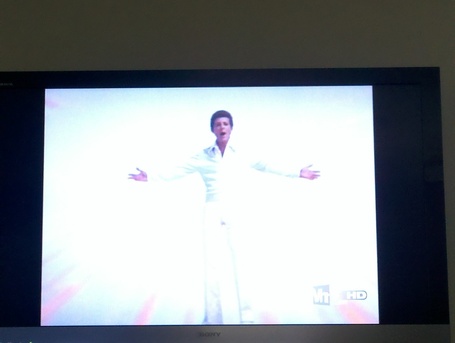 Tai Wesley. The Utah State forward and leading scorer fouled out and wasn't much of a factor against the Hoyas, but damn is he handsome.

Michael Turner That Guy Has To Get More Minutes Award:

Vee Sanford has to play more. Before the Big East starts, he needs to be getting 10-15 minutes a night. Vee is currently averaging 8 minutes a game and Chris Wright is averaging 33. That difference will only get wider as the season progresses unless Vee gets more time in the next few games. Sims has become more comfortable because Vaughn hasn't been able to stay on the floor due to illness and foul trouble. We need Sanford to get the same exposure and save Wright's legs for February and March.

The Tesla Award:
Utah State coaching staff. Signs, signs, everywhere are signs. I respect the attempt at trickery and chicanery by having signs for various plays in your playbook to confuse the defense, but while these kinds of maneuvers may work against the likes of Hawaii, they don't have much of an impact in the Big East. 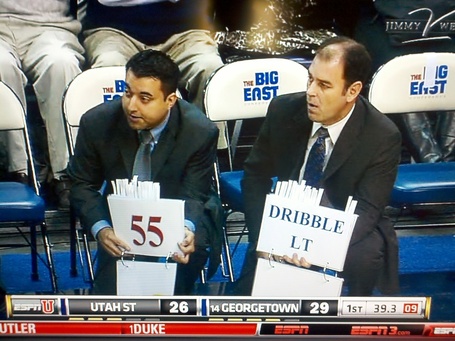 Ooh you guys are SO like confusing Georgetown's defense with your tabs and binders.

The Jim Nantz Commenter of the Game Award:
Be(a)st of the Big East is this game's winner for the insight below.

we played Temple our first game and lost to ODU after going 8-0
This year, we played ODU first and are playing Temple with an 8-0 record…

The Document Your Lunch Award:
Behold the Wonky Dog! 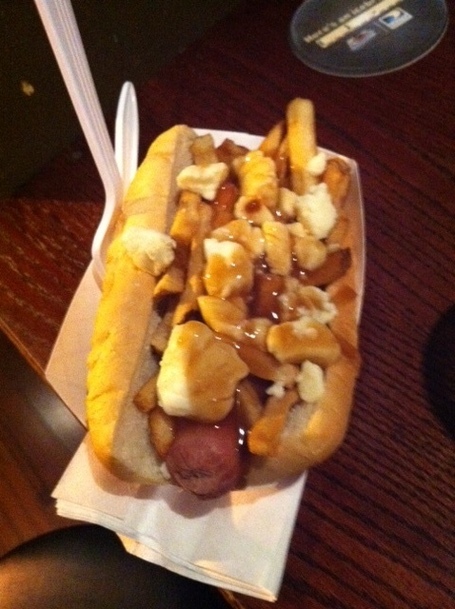 127 Hours Award:
Word of advice here. You may want to check out this movie because Danny Boyle directed it and you find James Franco attractive, but if you get squeamish at the sight of someone CUTTING HIS ARM OFF I'd stay home. Oh, this award goes to Henry Sims, because he is awesome.

Old Balls Award (Named in Honor of the Winner of 2010 Casual Bracket Contest):
NC State. Come on dammit! Up six on Syracuse with 11 minutes to play in the second half and chucking awful jumpers on four consecutive possessions to lose the game with numerous opportunities to take the lead down the stretch? FAIL. DAMN YOU, WOLFPACK.

Improper Use of Casual Swag Award: 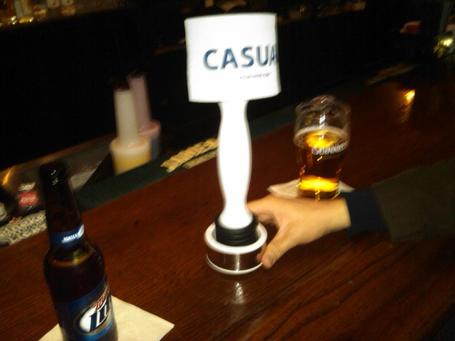 Casual Swag can be used for many things, however, a shake-weight warmer is not one of them.

Live By the Three Continue to Live Despite the Three:
Georgetown Hoyas. From shooting the lights out against Missouri the Hoyas only took eight shots from beyond the arc, making a dismal two. So what? The inside game worked. We are clearly unstoppable.

DC is for Lovers Award:
Nothing like waking up early to run down to you illegally parked car to find a pile of these littering your windshield. Better than a ticket, I think.

The Leaving Las Vegas Award for In-Game Beverage Choice:
Solid in-game drinking by one of our West Coast Casualties. 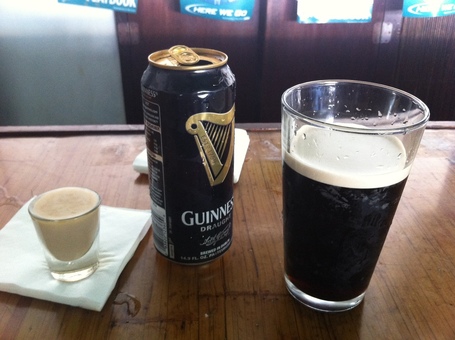 Drinking makes a win so much better.

The Complete's Idiots Guide to Being Pathetic Award:
Syracuse fan Jay Costa. Nothing says pathetic more than spending your Saturday night trying to fight with Chris Wright on Twitter and then ending the conversation with the following shameful attempt at intimidation: 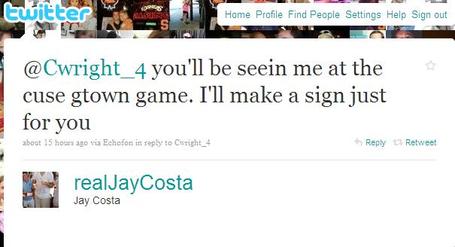 The Things Better Improve By Conference Play Award:
Verizon Center Concessions. It does not need to take this long to get a bud light and an order of the new buffalo chicken tenders. I would like to write fascinating awards about Georgetown's press or Utah State's horrible shooting but I missed a huge portion of the first half in the chicken line and a huge portion of the second half in TWO different beer lines trying to beat the 15 minute cutoff. And don't even get me started on the premium beer carts still being closed. I can't take much more domestic light drafts! 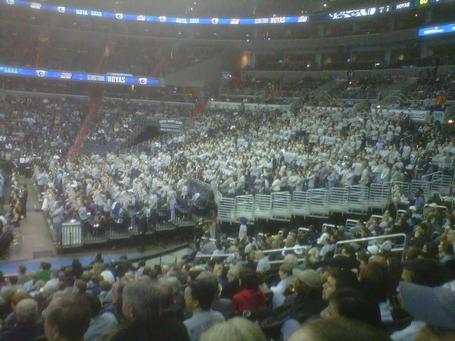 Solid turnout by the students 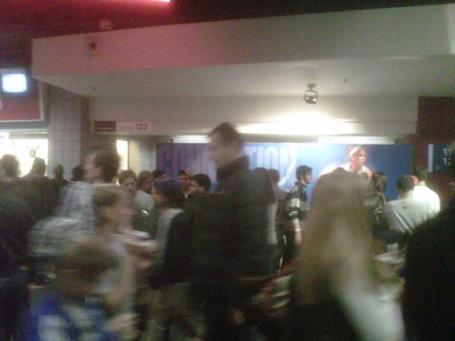 The Temple Owls are NeXt.