The Casual Awards: Irish I Were Drunk

Share All sharing options for: The Casual Awards: Irish I Were Drunk

When Irish hearts are happy,
All the world seems bright and gay.
And when Irish eyes are smiling,
Sure, they steal your heart away.

Well, that sucked.  In the wake of Georgetown's season ending loss to Notre Dame, we've managed to pick ourselves up from the cold damp floor and hand out hardware to those most deserving.  Away we go... 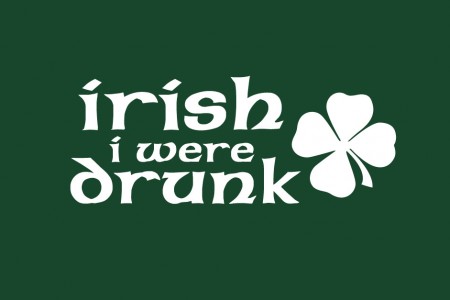 The Chris Wright Heart of a Champion Award:
Yikes.  With so many options to choose from it's difficult to pick just one.  Next award please.

Roy Hibbert Silly Fouls Award:
Big Roy was phenomenal at Georgetown, but too often I'd find myself dumbfounded when he'd commit fouls 30 feet from the basket for no reason. Well, Julian Vaughn is Roy on steroids. How often can a guy pick up two fouls in one minute? It is driving me crazy.

George Bush Mission Accomplished Award:
We're going to have nights where we don't shoot the ball well, and on those nights I'd like Austin Freeman and Chris Wright to bully their way to the basket. If we aren't shooting well, I'd rather not have Jason Clark shooting 30 footers, or Henry Sims and Nate Lubick attempting threes.

Ed Rendell Wussies Award:
We lost the game fair and square. I get that. But those were some ticky tack fouls called. I blame Georgetown as much as the zebras. We have to learn to adapt to different refereeing styles - I'm staring directly at you Julian, Nate, Jerrelle and Henry.

The Wet Blanket Award:
Man it would have been fun to start out conference play with a nice winning streak so THE GLOBAL PHENOMENON could continue to belittle our other Big East brethren and poke fun at Syracuse.  But now the Hoyas are WINLESS in Big East play and don't have another true test until Pitt on January 12th.  Hooray beer.

Jekyll and Hyde Award:
Chris Wright.  3 points on 1 of 9 shooting (0 for 5 from three), 4 fouls and 3 turnovers.  This game demonstrated just how much CW means to this team's success.  I didn't notice that ND did anything particularly unique on defense to bother Wright when he had the ball, so hopefully this was just a blip on the radar.

Deep Impact Award:
For the inevitable meteor from Syracuse that heads our way after each Hoyas loss, here's an email I received from a Syracuse fan this morning:

Is it possible that The Hoya Trinity are not the greatest backcourt in the history of all of time and space?  Perhaps they are just a poor man's version of Tim Abromaitis and Ben Hansbrough.

Side note:  I say all of this and may end up eating crow if ND beats Cuse at home this weekend, but Cuse pulls out that victory, expect another email from me on Monday.

Hakeem Olajuwon Phenomenal Post Moves Award:
You know how Kobe famously worked with Hakeem to develop his footwork? Looks like our own Julian Vaughn did the same. A tremendous lefty hook and a thunderous dunk?  Wait, those were his ONLY BASKETS OF THE GAME?

John Cahill Award:
No, the refs did not decide this game - it was Georgetown's horrific offensive (pun!) output. But a 27-9 free throw disparity in favor of the home team gets a Cahill, narrowly avoiding a Tim Donaghy Award.  Georgetown was whistled for 24 fouls in this one which was one more than the number of field goals they made.

The Old Balls Award:
Jenn Sterger's attorney.  So after all the nonsense with the cell phone messages and dongshots, Brett Favre gets a $50,000 fine from the NFL and famewhore Sterger has to find another way to reclaim her 15 minutes.  High comedy out of her attorney who derided the NFL's decision, saying the punishment did not fit the crime and calling the NFL a good ol' boys league.  You don't say, Ace!

David Hasselhoff Award for Being a Drunk:
JahidiLikesPie.  The dude drank EIGHTEEN (18) Coors Lights before, during and after the game.  EIGHTEEN.  And this was during a game in which his Nervous Level was 'Guarded."  Really looking forward to the Pitt game.

That Blogger From Rakes of Mallow Was Right Dammit Award:
In the comments of our SWTE with Notre Dame, blogger CW discussed the importance of having a great coach.  Not taking anything away from JT3 but Mike Brey did an outstanding job preparing for the Hoyas.  ND won that game because of coaching.

Balanced Offense My Ass Award:
Georgetown.  Austin Freeman has 21 points but no one else had over 8.  Awful.

Reggie Miller Award:
Given to a player who shoots when hot and shoots to get hot, this one goes to 2/3 of the Hoya Trinity: Chris Wright and Jason Clark. A combined 4-18 from the floor! Tres bien. In fairness to them, everyone other than Austin Freeman sucked last night but shots like Clark's step back NBA 3 in the last couple minutes are not the type of team ball and good shot selection that had propelled Georgetown this year.

JGD Loves His Girlfriend Award:
"I'm going to be honest, I watched the first 15 minutes of the game, and then I went to dinner with my girlfriend and her family. Was I mad at her initially for scheduling a dinner during the first Big East game? Sure. Am I thrilled with her now, knowing I missed that poopshow? Hell yes. I snuck to the bathroom of DBGB to check the score, "oh 69-55, whatever I'll go back to my delicious steak frites".  Had I been at home watching the game, I may have hurled myself out of my apartment." 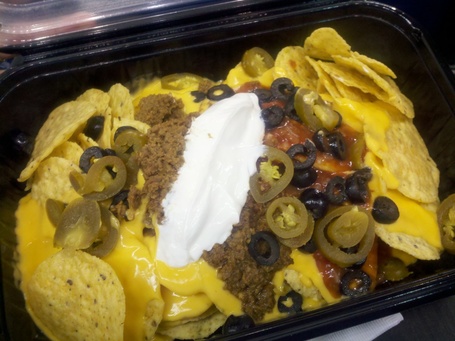 Nachos at the New Orleans Arena are like manna from heaven 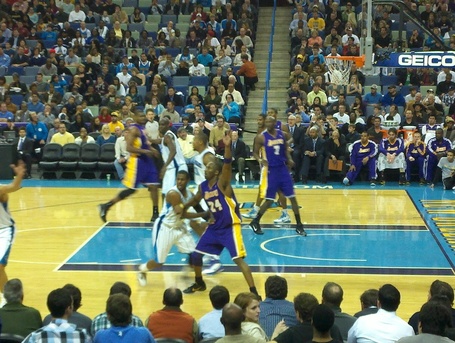 Split 'Em Award:
Julian Vaughn and Henry Sims combined for 8 points and 8 fouls in 40 minutes of play.  On a blackjack note, I no longer split 8s against a face card, I just won't.  I don't care what 'The Book' says, that move just doesn't make any sense to me.  Why turn a 16 into two 18s and hope the dealer doesn't have a 20 when you know he does?  Even if I split and then work my way into a double down scenario on one or both of the hands, my back is still against the wall.  So if you're the truck driver playing that riveting $5 hand at third base in a casino in Biloxi, MS on Christmas Eve, please next time don't blow the smoke from your Marlboro Red and mutter "you should have split 'em" under your breath when I have $50 on the table and take just one card and stay on a 20 and push.  Thanks.

The Silver Lining Award:
If this is the game where nothing went right I'd rather get it out of the way now then have it show up and bite me in the ass in March.

Gratuitous Picture of Susan Boyle Award:
This is what you get when Georgetown loses.