Sleeping With The Enemy: The Aggies of Utah State

Share All sharing options for: Sleeping With The Enemy: The Aggies of Utah State

Better late than never!  As always we here at THE GLOBAL PHENOMENON are bringing you everything you need to know about Georgetown's next opponent.  Special thanks to Tony Jones of the Salt Lake Tribune for providing us with the answers to our always intriguing questions. Mr. Jones, these glasses of champagne are for you.  Bring it. 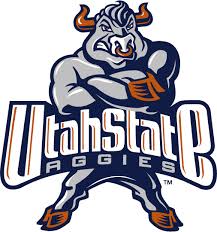 I am a high school senior playing basketball at Salt Lake City High. Why do I go to Utah State instead of Utah or BYU? Step into coach Morrill's shoes and recruit me.

Stew Morrill has become an institution at Utah State, winning 75% of his games in his 13 year tenure. Do you have any fear that he will jump to a bigger school or do you see him as a Utah State guy for life? It seems like he'd be a prime candidate for Mark Few's job at Gonzaga if he ever leaves.

I could see Morrill going to Gonzaga. He played there in his college days. Other than that, Morrill is an Aggie for life.

Tai Wesley is Utah State's best scorer. He will be one of the best interior players the Hoyas face this season. Brady Jardine averages 9.6 rebounds per game.

Other than BYU, Georgetown is the only ranked team that Utah State will play this season. How much would a potential win mean for the Aggies?

Since the Aggies will probably win the WAC, a win over Georgetown would give USU a national ranking, two to three seed lines in the NCAA tournament and a guaranteed at-large berth should Utah State lose in the WAC tournament.

Utah State always seems to be the ‘mid-major' team that has 25 wins each season but is always on the bubble. As an Aggies fan, talk to us about whether you think Utah State is perceived properly in the eyes of the Selection Committee.

Not an Aggies fan, but the NCAA tournament has given Utah State a fair shake. The Aggies were an at-large team last season and have been given at-large bids before. USU has to schedule tougher more consistently, but this schedule has a lot of potential NCAA tournament teams on it.

There is a big rivalry between Utah and Utah State, but not as big as the Utah State-BYU rivalry is.

Talk to us about the WAC this year. How many teams do you think the conference will send to the NCAAs and where do you see the Aggies finishing?

The WAC is a one bid league this season, possibly two if the Aggies falter in the tournament.

Do you ski or snowboard? For your money, where is the best place to ski if I'm venturing to the great state of Utah?

It's Saturday night in Logan, Utah. Where are all the cool kids going? Tell us something about social life at Utah State that we wouldn't expect. On a related note, I've heard the alcohol content in Utah is abnormally low due to some crazy laws. What happens when you venture to other states to drink?

I reside in Salt Lake City, but have seen enough of Logan to know I wouldn't want to be there during partying hours. Salt Lake is like any other city its size. It has some nice clubs. And if you're in Salt Lake looking for alcohol, it's very easy to find. That's the bad rap Utah gets. Salt Lake is actually pretty modern. You can get drunk there just as easily as you can in D.C.

My prediction: Georgetown 75, Utah State 63. The Hoyas are playing their best ball since the 07 Final Four season. They have too many ways to score and will eventually pull away.