The Casual Awards: Winning In Memphis

Share All sharing options for: The Casual Awards: Winning In Memphis

Put on my blue suede and gray shoes
And I boarded the plane
Touched down in the land of the Delta Blues
In the middle of the pouring rain
W.C. Handy Patrick Ewing - won't you look down over me
Yeah I got a first class ticket
But I'm as blue as a boy can be

Then I'm walking in Memphis
I was walking with my feet ten feet off of Beale
Walking Winning in Memphis
But do I really feel the way I feel?

Hanukkah. DONE. Christmas. Done. Out of Conference schedule. DONE. My 24-hour bout with diarrhea. DONE. After yet another convincing win by your Georgetown Hoyas over a ranked opponent on the road, we here at THE GLOBAL PHENOMENON are handing out hardware to those most deserving. Away we go... 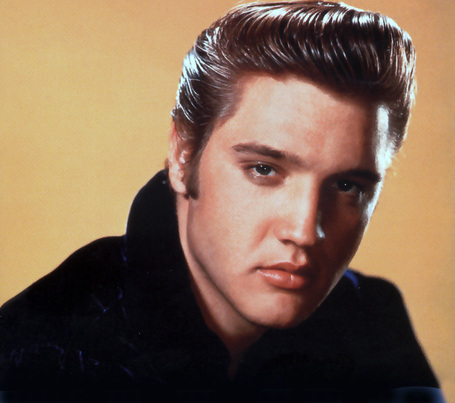 Thank you, thank you very much. (via Creative Commons license)

The Chris Wright Heart of a Champion Award:
Austin Freeman. 24 points on 9 of 12 shooting to go along with 5 rebounds and 4 assists, Freeman silenced those who began to question whether or not he had lost his stroke by asserting himself early and often for the Hoyas. Honorable mention to Julian Vaughn, whose 15 points on 70% shooting and 10 rebounds gave Georgetown a fierce inside presence.

The CasualHoya.com Delusional Award for the Greatest Basketball Team in the History of Basketball:
Georgetown Hoyas. The team is just awesome. AWESOME. There is ABSOLUTELY NO REASON RIGHT NOW FOR EVERYONE ON THIS BLOG TO PUT DOWN NON-REFUNDABLE DEPOSITS FOR BASEMENT HOTEL ROOMS AT THE FINAL FOUR. NONE. There is absolutely no way that any other college basketball team on the planet earth is better than the Georgetown Hoyas. That is an indisputable fact. And after we win the national championship we are going to sell CasualHoya.com to Groupon for $10 billion dollars.

The Gun in the First Act That Goes Off in the Third Award For Something Noticed that Causes Concern:
Free throw shooting. A lot of fouls get called in a physical game against a team like Memphis and the same Georgetown Hoyas that were perfect from the line against Missouri shot a decidedly mediocre 65 percent against Memphis. Not good. Eight points left on the floor, which didn't matter that night, BUT WILL MATTER IN THE FUTURE. And oh, irony of ironies, that we notice this issue against Memphis which lost a national championship game (that never happened) because of poor free-throw shooting.

The Cap Gun in the First Act That Goes Off in the Third Award for Something Noticed that Doesn't Really Cause Concern:
The Return of the Wrecking Ball. Chris Wright's life was changed by CP3 camp and the good habits he picked up over the summer are a lot of what makes the Hoyas this year the NATIONALLY-RANKED POWERHOUSE that they are. But in tight moments against Memphis, your sharp-eyed bloggers noticed hints of the Return Of The Wrecking Ball: reckless, uncontrollable drives into the lane that typically do not end well for you and yours. The appearances were brief and rare, but the first noticed this year. A worrisome development if Wright responds to close games by going into hyperdrive instead of playing calm, cool and collected like he does when he's at his best.

The Silence Of The Lambs Award:
There's no sweeter sound than the silence of an arena during a Hoyas road win. Put the fucking lotion in the basket!

Jon Gruden Horrific Commentator Award:
Jon Gruden is the worst. I haven't hated a commentator this much since the days of Billy Packer. Well, Stephen Bardo just made a strong case for Rookie of the Year. His debut was LeBron James-esque, just taking the basketball world by storm. I watched those snazzy highlight compilations this morning, and in the +8:00 clip of Georgetown highlights, Bardo was talking about Memphis for like 75% of the time. What an asshat.

Vinnie Johnson Microwave Award:
I may be dating myself by referencing a Detroit Pistons team that was dominant when I was like three years old, but Vee Sanford is the college basketball version of The Microwave. The kid is averaging 19.8 points per game on an adjusted 40 minute basis. Last night he scored 5 points in 6 minutes and that tear drop shot brings a tear to my eye every time he floats it up.

Austin Freeman Efficient Scorer Award:
Julian Vaughn. Obviously Freeman qualifies for this award damn near every game he plays, but Vaughn put up 15 points on 9 shots while grabbing 10 rebounds and 4 blocks. And I won't even mention just how handsome he looked in the black uniforms.

The Bash Brothers Award:
Everyone loves D2: The Mighty Ducks. My favorite characters are Dean Portman and Fulton Reed, better known as The Bash Brothers. The torch has officially been passed to Jerrelle Benimon and Nate Lubick. They must be called The Bash Brothers. JT3 has never had two players as aggressive and badass as these two. Every foul they commit means something. They are serving notice to anyone who comes in the lane that you will get knocked on your ass if one of The Bash Brothers is in the game.

John Wooden Schooling Youngsters Award:
Chris Wright. The Wrecking Ball showed Memphis' Joe Jackson a thing or two about playing the point guard position last night. If I were announcing the game I would have said "Chris Wright is making Joe Jackson look like Tito tonight" after Wright's numerous uncontested layups and backdoor cuts. But I wasn't commentating, and instead had to hear Stephen Bardo spend his entire night slobbering over a Memphis team that lost by 17 points.

Broken Record Award:
I feel repetitive continually saying how lucky we are to watch Freeman and Wright play basketball together. Nevertheless, I'll say it again, and I promise this won't be the last time I do. Watching Austin Freeman and Chris Wright play basketball together is an absolute pleasure. There is no substitute for experience in college basketball, and Georgetown fans are enjoying the perks of watching seniors guards game in and game out. Not to go all Billy Madison on you, but "YOU'VE GOT TO CHERISH IT."

Sleepy Award for Outstanding Christmas Contribution:
Bruce Springsteen. You were expecting something else? Sure we love hearing Bono and casual loves hearing Sandler's Hannukah song but until the sleigh bells ring and we learn the big man wants a new saxophone, it ain't Christmas.
Tim Gunn Fashion Sense Award:
Hoya Trinity. It's Christmas time and the good folk at Nike saw fit to hand off some gray retro Jordans? Tremendous upside and out vaunted trio rocked them well.
Romy and Michelle High School Reunion Award:
4 glasses of Buffalo Trace bourbon on the rocks with a splash of soda remarkably helped ease the pain of missing the Memphis game to attend wife's 15 year high school reunion. Honorable mention: ESPN ScoreCenter App for the Droid X. 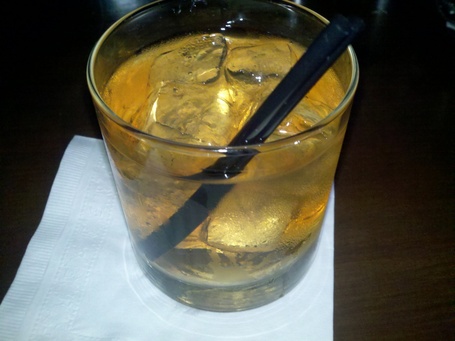 Big Man U Award:
Georgetown. We've taken to overlooking the contributions of our bigs as we focus on the backcourt but that game isn't a blowout without some tremendous frontcourt work. Vaughn had a series where he blocked two shots, got the rebound, and fired a Wes Unseld (or Kevin Love for our younger readers) style outlet to Wright, which Wright converted without a dribble. That is a damn fine play. Sims continues to impress with precision passing and a developing understanding of the game and Lubick and Benimon provide solid support minutes off the bench.
Relocation Move of the Year Award:

Hoyas assistant coach Coach Robert Kirby. I have no doubt that the crushing home prices in DC are higher than in the Starkville Mississippi metropolitan area but do you think coach Kirby regrets that move one bit? Brings in Tyler Adams and bails on a horrific program that has star knucklehead, Renardo Sidney, fighting with A TEAMMATE during a nationally televised game? There is no way to justify the SEC's existence. Place is filled with corruption and morons.

The Elephant In The Room Award:

D.J. Stephens' dunk on Hollis Thompson. His teammates gave him enough crap on Twitter already, so I don't want to pile it on. But OMG THAT DUNK WAS ABSURD OOOOOOOHHHHHH BOYYYYYYY. I will say I was impressed Hollis hit that lay-up and the free throw afterwards and sort of redeemed himself. But OOOOOOOOH CHILDDDDDD THAT DUNK WAS RIDONKULOUS.

Bold Prediction For The New Year Award:
Markel Starks is about to have a breakout Big East campaign. I can see him getting more and more confident and comfortable each game, and his shot continues to improve. I think he is going to start really making noise as we enter Big East play.

Deep Blue Something Award:
Remember the guys that sang "Breakfast At Tiffany's?" That song rules. Well this award goes to the Georgetown Hoyas. How deep are we this year? Jason Clark gets into foul trouble, and he is immediately spelled by Starks and Sanford. Nate Lubick has some ticky tack nonsense called on him? Bring in Jerrelle Benimon. Julian Vaughn gets two quick cheapies? Here comes Henry Sims. Our depth is insane.

…seeing it written this way reminds me of the way some chick (please don’t be you!) in my section screams it. With a bloodcurdlingly high pitched, always annoying voice, this girl at times makes me wish that Vee wasn’t on the court. And I LOVE the guy! From the cringes looking down the section, it looks like this scourge is killing other fans—die-hards—as well. Anyone else getting this? Am I the only one?

Eat Crow Award:
To all those fans (including myself) hating on our zone. It was extremely effective against Memphis, and helped slow their frenetic scoring.

Old Balls Award:
The NFL. Move the game between the Vikings and Eagles to Tuesday because of some snow and wind? SACK UP YOU PANSIES! Did my entire Week 16 Fantasy Super Bowl chances hinge upon Michael Vick sucking in a driving snowstorm in Philly? Will I now likely get crushed because the powers that be would rather see the DOG MURDERER roam free and score 4 touchdowns? Thanks, jerks.

I Hate Stephen Pardo So Much I Made Another Award:
One of the only times Pardo spoke about Georgetown last night, he actually annoyed me, believe it or not. He insinuated that Freeman isn't athletic because he is such an efficient scorer in the mid-range game, as if those things are mutually exclusive. To announcers of future Georgetown games, just because Georgetown is fundamentally sound does not mean that they are unathletic, please try to comprehend that. If you don't believe me, watch this video of Austin Freeman.

Empire State of Mind Award:
The game watch at Sidebar. Free beer one hour before the game!?!? I felt like I was in a fat kid in a chocolate factory. Bud lights will inspire you, let's hear it for New York.

No One On The Corner Has Swagger Like Us Award:
Oh Lord, I am white. Nonetheless, the Georgetown Hoyas are carrying themselves like proven veterans who expect to win right now. And you know what? As a fan, I've taken on the same personality. I expect us to win every game. I don't get that rattled when a team makes a run, because I believe we will pull it out in the end. I haven't had this much confidence in a Georgetown team since 2006-2007. Last year when we won big games against Duke, Butler, Syracuse and Villanova I was ecstatic and shocked. This Memphis game would have fit in the same category last year, but this year, I am just ready for the next game. The team is on a mission this year, and I'm ready for the ride.

Notre Dame is NeXt.