The Georgetown Hoyas Are The Greatest Team Of All Time, Dominate Loyola 99-75

Share All sharing options for: The Georgetown Hoyas Are The Greatest Team Of All Time, Dominate Loyola 99-75

The last tuneup of the year couldn't have been any better for the Georgetown Hoyas.  After a week-long layoff while the players were taking finals and being college students, Georgetown came out and destroyed Loyola (MD) 99 - 75. The Hoyas shot 64% from the field, reminiscent of the cocaine-infused 1985 Villanova Wildcats.  Austin Freeman, Chris Wright and Jason Clark played season low in minutes, while Henry Sims and Nate Lubick continued to evolve.  Sims tied a career high of with 12 points hitting all five shots from the field, and has many Hoya fans clamoring for Big Hank to join the starting lineup.  Lubick scored eight points as well, even hitting a three along the way. 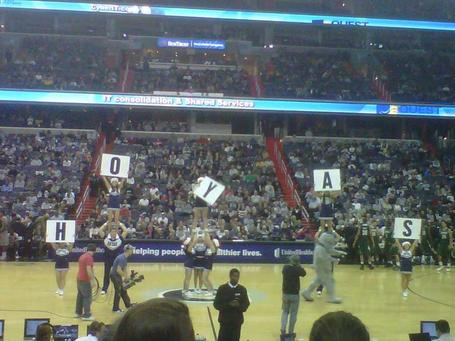 The Hoyas played every player on the roster, with the freshmen and sophomores getting plenty of run.  Moses Ayegba continues to show signs of brilliance, chipping in with six points and nailing all four of his free throw attempts, while Aaron Bowen, Markel Starks and Jerrelle Benimon saw plenty of action.  Benimon tied for the team lead in field goal attempts with seven, making four of them to finish with nine points.

After The Jump, more thoughts about things.

I know that Julian Vaughn hasn't looked good in the last few games.  He has been slow, often in foul trouble and looks to have regressed since his breakout year last year.  That said, I still believe he should be starting.  We have played one team this year that was extremely physical - Temple.  In that game, Vaughn singlehandedly kept us in the game in the second half.  It's great that Sims and Lubick are getting better and contributing.  We need both of them to give us big minutes this year.  It makes me very, very happy that Sims has become a legitimate player.  He plays with poise, has expanded his offensive game, and is the best passing big man on the team.  Lubick gets better every single game he plays in and will definitely start next year along with Sims.  Benimon looked great today too.  Yet, against big, aggressive teams, I still trust Vaughn more than any other big man on the team.  We know he's not going to play 30 minutes a game, and that's why Sims, Lubick and Benimon are so important.  But, he is still the most experienced big we have and I'll be much more concerned if he is stinking up the joint against Big East competition.

Georgetown faces the 18th ranked Memphis Tigers on Thursday, and then Big East play starts against Notre Dame the following week on the 29th.  I am expecting a ton of stress and heart attack inducing games, so it's nice to have another win like today's over Loyola.

Ladies and gentlemen, the cupcakes are over. (Well, except for DePaul I guess).