Sleeping With The Enemy: The Greyhounds of Loyola

Share All sharing options for: Sleeping With The Enemy: The Greyhounds of Loyola

When I think of greyhounds I think two things.  One, the dogs that are horribly mistreated and race for money in front of old timers in South Florida, and two, the name for the beverage containing the ultra casual combination of vodka and grapefruit juice.  For your sake and since many of you will undoubtedly be buying me drinks at the 2nd Annual Casual Extravaganza after the game against Syracuse on February 26, 2010 (plug), I refer to this combo as simply "citrus" since it gets you your vital vitamin c and helps you out during a day of binge drinking. "Can I get you a nice Citrus, Mr. Casual?" "Why yes, beloved reader, YES YOU CAN."  Special thanks to the mysterious "Kevin S" for providing the answers to our always intriguing questions about Georgetown's next opponent.  Kevin, this greyhound is for you. 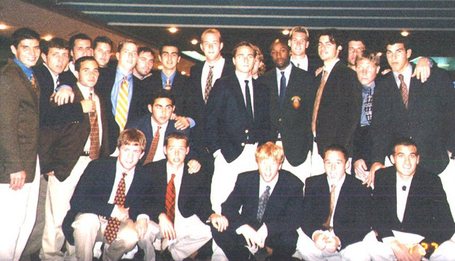 Who are Loyola's best scorers? Rebounders?

Our best returning scorer is attackman Matt Langan who scored 16 goals last season and... what? You want to know about Loyola *Basketball*? That's weird...I think we have a guy named Jamal Barney who scores a bunch of points and Shane Walker is a beast (6.9 Rbs and 9.6 Pts per game)

Interestingly, it appears that the game with Georgetown will be the only guarantee game that Loyola plays for the entire year. Most small schools have to play a bunch of those games just to fund the rest of the programs offered - how does Loyola pull this off?

I have no idea. Maybe revenue sharing with the other MACC powerhouses?

We at CasualHoya are firmly resolved that 'The Wire' is the best television show in history. Yet Hire Esherick and I disagree, with me saying Season 4 was the best and him saying Season 3. Break the tie for us and let us know your favorite character from the series

Season 3 is clearly the best Wire season since it revolved around the different management styles of Avon and Stringer (Gangsta vs. Businessman) which is quite possibly the best running plot theme in television history. Season three had everything from a violent drug war to an exploration the corrupt nature of politics in Baltimore. Some Wire fans like to think of themselves as "enlightened" so they claim the season about the failing education system was the best. They are wrong.

Favorite character is Omar, every man got to have a code.

Jimmy Patsos had a nice three year progression of wins, culminating with 19 in 2008 before hitting the skids the last two years. Is Coach Patsos feeling any pressure?

I wouldn't say he is feeling much pressure considering the state of the program he took over. You have to remember that in 2004 Loyola was two games away from setting the record for most consecutive losses by a D1 men's basketball team. Patsos rejuvenated the program largely on the back of two stud guards, Andre Collins and Gerald Brown who lead the team from 2006-2008. Patsos has yet to land another recruit of the caliber of Collins or Brown and the team has suffered as a result. For making the Men's basketball program somewhat relevant at Loyola, Patsos has a grace period of at least a couple more years.

How's the MAAC looking this year? Where will Loyola finish and who will ultimately emerge from the conference to head to the Dance?

Loyola has looked quite mediocre this season and will probably finish in the middle of the MAAC with a .500 record. So far Fairfield looks like the team to beat in the MAAC with traditional powerhouse Siena suffering though a down year. That said, I am 100% confident that Loyola will get hot in the MAAC tourny and secure our rightful place in the big Dance.

Where's the best place to get a pit beef sandwich?

Charm City is making something of a hipster comeback in the past few years. If I'm a Loyola undergrad, where will I be to meet the coeds on a Friday night?

If you are a Loyola undergrad on a Friday night you will undoubtedly eschew the various cultural and social opportunities that downtown Baltimore has to offer for a hole in the wall bar affectionately called Craig's on York Road. The bar will smell, it will be overcrowded, Journey will be played and you will have a fantastic time.

(Casual note:  I did some investigative reporting and came up with this nugget on something called "Craig's Fest".  Here's a quote in case you're too lazy to click the link:)

"But even with the new rules, there was no shortage of public urination, girls riding the mechanical bull in sundresses, fights threatening to break out, and overall drunkenness. But even so, Craig’s Fest is a day many Loyola Students look forward to every fall and spring and as senior Megan McManus put it, "It’s the best day I’ll never remember."

The underdog greyhounds inspired by a rowdy, vocal group of fans (myself and 5 friends) will jump out to an early lead and cause Casual Hoya's in game thread to explode with panicked comments (Casual Note: This will definitely happen and I'm already looking forward to it).

Then reality will set in and the Hoyas will win by 30 or 40 points.