Share All sharing options for: The Casual Awards: Hoyas Unleash The Fury

Maybe the loss to Temple made them mad, because the Georgetown Hoyas opened up a can of whoop ass on the Appalachian State Mountaineers yesterday. The Hoyas were fired up for a noon game on a lazy Sunday and crushed the visitors from the Southern Conference by thirty points. As usual we here at THE GLOBAL PHENOMENON are handing out hardware to those most deserving. Away we go...

The Chris Wright Heart of a Champion Award:
Chris Wright. Wright tied a career high with 12 assists and the number could have been closer to 20 had the Hoyas converted on some bunnies. Despite scoring only 6 points, Wright expertly steered the Hoyas through Appalachian State's defense, creating numerous easy looks both inside and out. Honorable mention: Nate Lubick. 11 points and 7 boards in 17 minutes of hustle. ME LIKEY.

Drake and Swizz Beats "Oh You Fancy" Award:
Chris Wright's behind the back pass to Austin Freeman. It is hard to envision having a backcourt that has this much chemistry in the near future. Two McDonald's All American guards from the same area that both stay four years? Yeah, we need to enjoy this as it lasts.

Rudy Most Beloved Walk-On Award:
Ryan Dougherty. I legitimately thought he might get carried off the court when he hit that layup yesterday to end the game. I'm not sure I've ever seen Wright or Freeman that ecstatic. Dougherty will solve the Middle East crisis, put an end to WikiLeaks, and cure cancer.

Pete Rose Charlie Hustle Award:
The Georgetown Hoyas. I loved how many people got on the floor and showed some grittiness yesterday. It was like last year's Rutgers game, but the exact opposite. It's been nice to see the Hoyas not take any team lightly this year.

Dumb And Dumber "Just When I Thought...And Completely Redeem Yourself" Award:
Hollis Thompson. Ill advised three with 10 seconds left against Missouri? That happened. Not passing to Julian Vaughn for game winning dunk against Temple? Yes, that happened too. But did you see that finger roll that somehow went in during yesterday's second half? Wright hit him for a pass, Hollis found himself directly underneath the basket and somehow put enough English on the ball for it to go in. Nifty.

Alonzo Mourning Award for Outstanding Hoya Footwork:
Henry Sims. An up and under? Where the hell did that come from? Couple that with two dunk shots and it was a hell of a half for Henry.

Patrick Ewing Award for Best Use of a T-shirt:
Markel Starks. CasualHoya didn't overlook Chris Wright going for a new look but Starks stays true to the street with a casually baggy gray shirt.

The You Are Now Free To Fly About The Country Award:
Southwest Airlines. When grandparents are visiting and blizzards shut down all flights through Chicago, only the good people at Southwest are willing to reschedule flights. And for those who haven't yet spawned the next round of Casualites, rest assured that there's only so long that you can stand to be around new grandparents.

Doug Gottlieb Goat for Horrific In-Game Color Analysis:
Adrian Branch. There's a reason that you've been relegated to ESPNU and it's because you suck. Apparently the clowns in Bristol were hoping that because Branch is a local, he'd have some biting and interesting insight. HELL AND NO. Watch muted if that clown is on the game.

Dennis Green "They Are Who We Thought They Were" Award:
Jason Clark. He shut down Donald Sims, the country's second leading scorer, holding him to 14 points on 4-14 shooting. That's the type of lockdown defense I expect from Clark every game. He has too many physical tools not to be first team All Big East defense. Consider that my challenge to you Jason.

New York Jets The Wheels Are Falling Off Award:
Casualhoya. He started the season 8-0 against the spread, and much like Rexy Ryan, started running his mouth. I'd hear things like "Vegas calls me The House now, because I rake in so much dough." Well it looks like "The House" is 0-2 in his last two, looking as shaky as Mark Sanchez did yesterday.

The Brandon Bowman Memorial Award:
The Appalachian State Mountaineers. Dedicated to the player or players whose play down the stretch with the line in play raises eyebrows, big ups to the Mountaineers who when down 19 managed to get outscored by Georgetown's C Team 10-0 down the stretch. The line was App State +21. Thanks guys!

Old Balls Award (Named in Honor of the Winner of 2010 Casual Bracket Contest):
The Metrodome in Minnesota. What the hell was that? 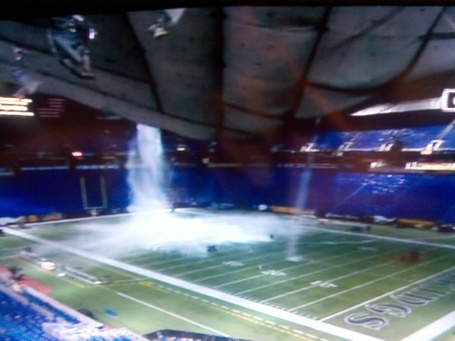 Why do they have a damn parachute for a roof?

Nostradamus Award:
The Casual Hoya staff. We asked our brethren at Temple if football coach Al Golden would ever take another job. Three days later, he accepted an offer from Miami. We can see the future.

The CP3 Award for Assists:
Chris Wright. One could only imagine what would happen to the GLOBAL PHENOMENON if its bloggers attended Chris Paul's basketball camp. We'd probably become NBA lottery picks and the CasualHoya would win the Pulitzer Prize for DOCUMENTING and exposing the seedy underbelly of lunchtime food trucks. But we would never leave our mother's basements for that long. Thank God Chris Wright did. He just gets better and better. Stupendous passing! (see other awards). Just six points but TWELVE ASSISTS. What do you think about that, Appalachian State Coach Jason Capel? "It all starts with Chris Wright," Capel said. "He came out and really set the tone for the game without really scoring."

The RED ALERT This Won't Work Against Syracuse Award:
Austin Freeman. Bit of a cold streak here, pal. We're not sweating it with Loyola coming up neXt. But then it's Memphis. AND THEN IT IS CONFERENCE PLAY! Here is a stat you can mull for the rest of the month: Freeman is 1-10 from three in the last three games. RED ALERT!

The Barker Davis Award for Georgetown Coverage:
Tarik El-Bashir. We're not going to tell you how many awards this week were lifted from nuggets in this morning's Washington Post, so we'll give a shout-out to Tarik who seems to be getting a hang of this college basketball thing.

The Sunday Games Suck Award:
Sunday Games. There's just something unholy about going to The Channel at 11am on a Sunday morning and having a Guiness and then trying to motivate to drink four more Bud Lights at Verizon Center. And then stumbling out into the rain to watch THE ABSOLUTE WORST TEAM IN THE HISTORY OF THE NFL, YOUR WASHINGTON REDSKINS. I suspect the 11am West Virginia game will be just as unpleasant, though on a Saturday during the playoffs so NO CHANCE the Skins will be playing.

The Articles in Playboy Award:
Hooters. Look, the wings are just good. And if you need a pitcher of beer and some spicy food after a Georgetown game, there are much worse decisions you can make.

The Daniel Snyder Award for Worst Owner In The History of Professional Sports or The Concept of Private Property:
Dan Snyder. He might as well have been the holder for that game-tying extra-point attempt, because everything that is wrong with The Washington Redskins is his fault. All of it. And I HOPE HE KNOWS IT. I hope he waddled out of his box last night after that defeat and climbed into his helicopter and WEPT all the way home to McLean, because the only way the Skins are going to get better is if that chopper PLUNGES INTO THE POTOMAC RIVER. Christ! THE SKINS ARE AWFUL. And Joe Gibbs was in the owner's box yesterday? JOE F-CKING GIBBS? Could you look more like the idiot fanboy we already knew you were? The coach of your childhood whose reputation you tarnished by bringing him back for post-retirement mediocrity you now stick in your box to watch the Skins lose in humiliating fashion? YOU ARE THE DEVIL! And I hate your wife in those awful NFL-gear-for-broads commercials.

The Roy Hibbert Memorial Award:
Moses Ayegba. What a debut! In just over one minute Moses scored 4 points including two pretty free throws. We are the world.

Document Your Lunch Award:
Everybody loves burritos, especially Casual Burritos deftly caught during the Chipotle burrito toss. Unclear why the girl on the right is hiding her face in shame. 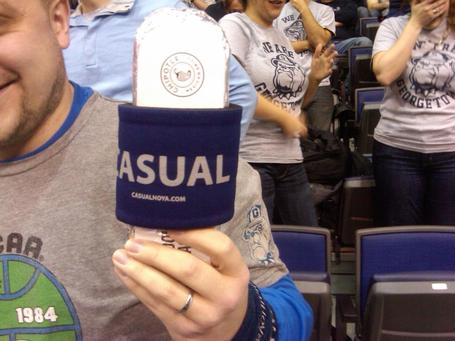 The Jim Nantz Commenter of the Game Award:
NewMexicoHoya is this game's winner for the insight below.

Julian is really struggling right now at both ends. On defense he is crouching too low and not using his height so when he straightens up to block shots his body hits the offensive player, committing a foul. On offense, he has not been strong around the hoop and has allowed smaller defenders to steal and swipe the ball from his hands. He needs to keep the ball high in the post and use his body and strength and not try to elevate over people.

In a nutshell, he is having a very hard time adjusting to being the primary post player and is getting outplayed by Henry and our opponents. 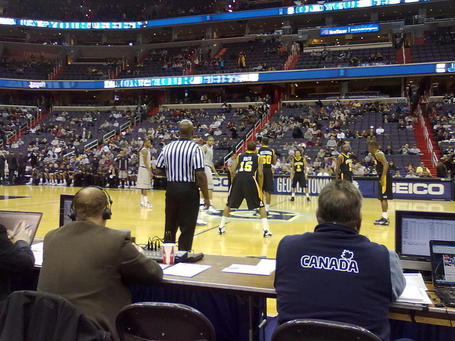